There are few things in sport that are more exhilarating than 6th round rookie kicker battles. On Sunday, both St. Louis Rams and Minnesota Vikings fans are in for a treat. Two of the most prolific 6th round rookie legs in the NFL will square off. Who’s got a leg up?

The Man: Blair Walsh - 6th round (175th overall) - University of Georgia. Much like Greg the Leg, Walsh immediately supplanted a veteran kicker (Ryan Longwell) as the team’s starter. Let’s see what kind of stats he’s putting up thus far:

He’s got 99 problems, but points aren’t one. As a matter of fact, he leads the team in scoring, and is a mere 16 points away from snatching Randy Moss’s franchise record for points scored by a rookie. Five made FG’s of 50+ yards is impressive. However, 55 yards? Ha! That all you got, Blair?

"I don't really look at what he's doing. I just try to focus on what we're doing out here," Walsh says. Suit yourself! If the Vikings don’t want to game plan for legs equally as popular as Heidi Klum's, you’ll have to learn your lesson the hard way.

The Legend: Greg Zuerlein - 6th round (171st overall) - Missouri Western State. I’d be willing to be that if Greg wanted to, he could kick Blair’s fancy SEC school right off it’s foundation. He’s got almost as many nicknames as 50+ yard FG’s this season. Young GZ joined the 60-yard club in his fourth week as a pro, in a winning effort against the Seattle Seahawks. Legatron also preserved the Rams undefeated streak against the NFC West in 2012 with a 53-yard overtime, game-winning FG.

It’s been rumored that the plane that flew the Rams to London for their Week 8 matchup against the New England Patriots was experiencing lift-off difficulties. Airport officials asked that Greg literally kick the tires in order to get the plane off the ground. Having seen the game, many wished he hadn’t.
One thing is for certain. Though some fans will have their eyes on Adrian Peterson and Steven Jackson, it’s clear the game’s more prominent rivalry is between the two young men who really do the scoring for their teams. A lack of adequate nicknames and an inability to kick the ball from St. Louis to Minneapolis is why I’m giving the edge to the Rams in this game. Plus, a stolen identity could possibly land Walsh in a bit of legal trouble... 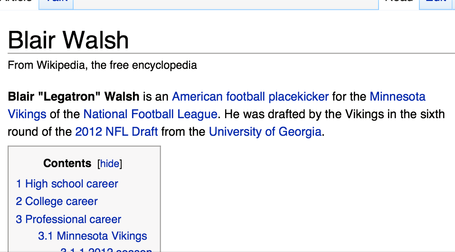 Go Rams! Stayed tuned here at TST for more up-to-the-minute Rams news. If you’re looking for more on Rams chatter, kicking airplanes, and how Big Ben is not a clock, just stop by and ask me on Twitter.