Preview of the Rams' first meeting with the Seattle Seahawks of the 2012 season.

I hate you. Full of regret, never forgiven.
Try to erase my memory, but cannot forget you.
It never ends, never,
It never ends, 'cause that's my grudge blues.

That's the third stanza from Meiko Kaji's Urami Bushi, translated roughly to "my grudge blues." It's the theme song of the Sasori series of movies including Female Convict 701, a 1972 movie I watched roughly 30 years later. (Author's note: I got into the Japanese super-violence genre for a good while back in the day which is why I came across this flick. Don't worry. I'm not crazy. Well, I am, but in an acceptable way.) If you recognized the song itself, it's probably because of the Kill Bill, Vol. 2 end credits.

In any case, it's the third stanza that struck me as I was listening to it this week. (Author's note: Yes, I listen to 70s Japanese pop music. Again, Acceptably crazy.) While the song revolves around the themes of the movie (post-feminism, violence, retribution), that stanza alone defines the hopelessness that the movie builds on.

It's also a great four-line poem that sums up being a Rams fan.

It never ends, friends. And as much as we'd like to walk away sometimes, we can't. We'll be there on Sunday. And next Thursday. And the Sunday after that. That's my grudge blues.

For game-related info, check out the SBN page for the game. For Seahawks news leading up the game, check out Field Gulls. Here's the injury report. 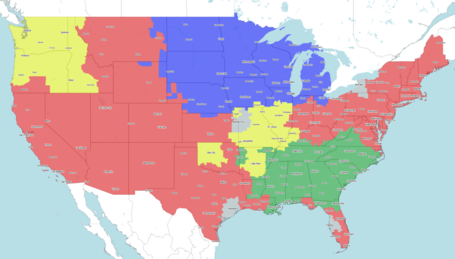 Well this certainly looks to be in the Rams' favor. Which of course means Russell Wilson will pass for 800 yards, 7 touchdowns and Cortland Finnegan will be credited with a new stat (reception assists) when he juggles the ball backwards into the end zone only to have it bounce off his face and into Golden Tate's hands for a nonsimultaneous TD catch.

Seattle's WR corps isn't bad that includes, along with Tate, Sidney Rice, Braylon Edwards, Doug Baldwin and Ben Obomanu. On top of that, there's a solid TE combo with Zach Miller and Anthony McCoy. The key here, though, is that in limited work, Wilson has spread the ball around well. Rice and Tate, the two most targeted options, have accounted for one-third of Wilson's looks. Overall, there are six players who have been targeted between seven and 14 times. For perspective, Danny Amendola's been targeted 34 times at a 35.79% clip, well more than double the amount of Brandon Gibson, the second-most targeted WR with 15 throws his way.

For the Rams, we've seen two stellar performances against the pass and one inconsistent one in week one. Put flatly, the Rams need to win this battle. Keep the deep game in check, rely on the pass rush, and take advantage of any mistakes Wilson makes. That's pretty much been the MO to this point, and if you're looking to point fingers at the Rams' 1-2 start, you're on the wrong side of the ball. Between Cortland Finnegan, Janoris Jenkins and Bradley Fletcher, the Rams have the cornerback strength to hold up here. The question is the safety play, between Quintin Mikell, Craig Dahl and Darian Stewart.

Marshawn Lynch bout to give you that kinda crosseyed, kinda not Beast Mode look, yall: 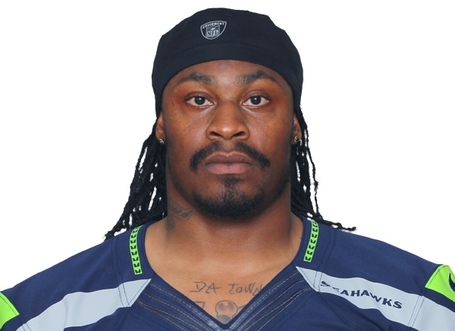 Yeah, that's it. Lynch has put up three solid games this year. And with the size of Seattle's line, they'll likely look to Lynch, as well as backups Leon Washington and Robert Turbin, to take advantage of what looks again to be a big problem for the Rams: run defense.

Whether it's James Laurinaitis providing a disappointing week three or the other linebackers misplaying in the run game or the safeties coming too slow in trying to overcompensate for a lack of pass defending skills or ineffective line play (which hasn't really been the case thus far), the Rams are struggling to stop the run. If they can hold this group in check, it would help improve the Rams' chances to a large degree.

Interesting battle here. An O-line that's strong in the run, but weak in pass pro against a line that's built for the pass and still exhibits deficiencies in the run. (I'm not buying those FO numbers yet...) Russell Okung mans the LT spot and there's additional quality with Max Unger at C and John Moffitt at RG (Moffitt, though, is doubtful today and will sit out in all likelihood). James Carpenter can provide run support as well, so it's going to be an interesting battle.

We know Robert Quinn and Chris Long are going to be difficult to handle all year. The big news here is the possible inclusion of first round pick Michael Brockers. He's still bothered by the ankle injury he suffered at the end of the preseason, so it should be interesting to see how he holds up without going at 100%.

Like I said last week, I have no idea what this passing attack is. Whether that's an issue of dysfunction or one of the search for identity, I can't tell after three weeks. It's a strange adventure for Sam Bradford who has to battle with a poor offensive line and a, let's say, imperfect WR corps.

As for the Seahawks, they've had an unexpectedly successful pass defense thus far. I certainly wouldn't have bet on a cornerback unit of Richard Sherman, Brandon Browner, Marcus Trufant and Jeremy Lane to have performed as well as they have. Sure, part of it's a matter of having the pass rush the Seahawks do and Earl Thomas is one of the best safeties in the league. But the cornerbacks haven't underperformed to this point. Perhaps this week changes things?

Still unresolved is the Rams stubborn avoidance of the running game last week, particularly in the second half. Steven Jackson, again, sat out of practice this week, but we all know it's nearly impossible to keep him off the field on gameday. And are there any Rams fans who aren't Daryl Richardson fans?

The Seahawks have been, along with Tampa and Miami, one of the best rush defenses in the league so far. The question here is how much the Rams attack a LB corps including K.J. Wright, Bobby Wagner and Leroy Hill (Hill's hobbled by a calf injury, but will probably be on the field for the first series at a minimum).

Oh hey, look over there! A sidewalk! That's pretty neato. Hey, let's go get some candy. (I am unable to discuss this in any depth as my emotional state has limits, friends. Pray. Even if you're not the praying type, pray.)

This week's top 3 storylines brought to you by three countries that nobody really ever thinks about:

Bhutan is a tiny country in the Himalayas, built around the capital of Thimphu and filled with the sweet hum of the Bhutanese official language, Dzongkha, and powered by the strength of their national currency, the ngultrum. If I was lying about all of that, you'd have no idea.

While the defense looks comfortable working together and has forged an early identity, despite significant turnover, the offense is a mystery. Is the run game something to lean on or something to try and insert at limited times to take advantage of deeper linebackers who sit in readiness for the pass? And what of that pass offense? Is Amendola going to be one-third of the offense alone come season's end? What is Steve Smith's role? Will Brian Quick have an impact this year? The Rams' offense is the anti-Shangri-la.

Gabon is the weirdest African country. It's not beset by civil war or jungle-borne militia leaders who run armies of kids. The economy is one of the strongest in western Africa. The health issues, while grave, aren't anywhere near the gruesome levels of Sub-Saharan Africa or in the horn. It's just strangely impressive.

Not gonna lie - I've never heard of Kiribati. Apparently, it's a collection of 32 islands in the middle of the Pacific Ocean. Here's the Presidential Residence - not flashy, but hey, it's a house.

The Rams' offensive line isn't going to be a flashy, dominating estate, like say Los Pinos. But can they be a collection of otherwise forgettable third stringers and backups? Can they weather the storm of Hurricane Seattle? Can they maintain some semblance of normalcy in a world that has surpassed them to a comprehensive degree?