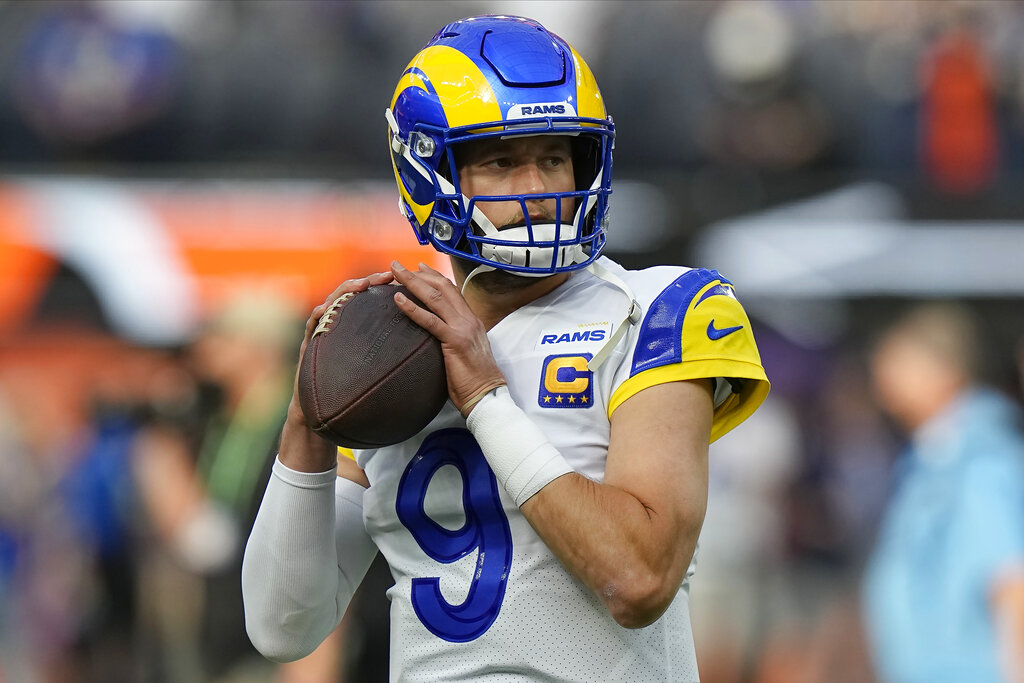 Matthew Stafford warms up prior to Super Bowl 56 in Inglewood, CA (Photo by Lynne Sladky/AP)

The Los Angeles Rams enter the season as defending champions (man that feels amazing to say) for the first time since the 2000-2001 season. However the last time they were defending champions, they put out a 10-6 record along with an early wild card exit in the playoffs. To avoid that same fate, and become the first back-to-back champions since the Patriots did so in 2004 and 2005, the Rams will need to get the most out of every man on the roster this upcoming season. Let's take a look at how each offensive position group grades out as we approach training camp in the coming months.

This is an easy one, as Matthew Stafford returns as QB1 following winning the Super Bowl in his first season with the team. John Wolford will be the backup for the third consecutive season, a man who has legitimate experience playing in big games which can prove to be invaluable as the next man up. Bryce Perkins will most likely be in another battle to make the roster, but has showed flashes in the preseason that prove he has the potential to be a backup quarterback one day.

Last season, the Rams traded for Sony Michel to help shoulder the load with Darrell Henderson while Cam Akers was out with and achilles injury. This proved to be one of the most valuable moves of the season, as MIchel posted a stretch of games in the tail end of the season that helped the Rams establish a much more balanced attack than earlier in the campaign. I believe they will miss his running style, as there is no true pounder this group presents this season. However, a full season of Cam Akers will be a sight to see, as he presents a receiving threat that the Rams lacked at times coming out of the backfield, along with the vision, speed, and elusiveness to burst out of the hole for big gains. The backup will be Darrell Henderson, a great 2nd option in a league where having multiple backs is ever so important. The only concern with Henderson has been his health, struggling with different injuries the past couple of seasons. These injuries are why the Rams took Kyren Williams out of Notre Dame in the 5th round, a stud who I believe will be looked at as one of the biggest steals in his respective draft class when it's all said and done. Then there is Jake Funk, a special teams guy that will most likely only be that due to the selection of WIlliams.

When you have the reigning offensive player of the year Cooper Kupp in your group, that gives a favorable boost to the grading. Kupp posted arguably the greatest season for a wide receiver in NFL history last year, and I expect another jaw dropping campaign from the best in the world. Top that with newcomer Allen Robinson, and all of a sudden the Rams have one the best 1-2 combos in the entire NFL. Van Jefferson proved he is capable of being a legitimate deep threat last season, with 4 receptions of 50+ yards in his second season with the team. Ben Skowronek was a late round pick for the Rams that proved to be one of the better selections in terms of immediate impact. Skowronek proved to be a very solid run blocker and valuable special teamer, which are two things that require maximum effort that he's more than willing to provide. Then comes the wild card, Tutu Atwell. Entering his second season with the team, many are questioning if Atwell can actually play in this league. Severely undersized, Atwell struggled to get on the field, chalking up only 10 offensive snaps with 0 receptions to show for it. Atwell did get hurt week 8 and was sidelined for the rest of the season, so I will give him the benefit of the doubt. Lastly, let's not forget that when the season starts, Odell Beckham Jr. could return to this already dangerous receiving group, giving Matthew Stafford and embarrassment of riches at he and McVay's disposal.

Do not get it twisted, Tyler HIgbee is most definitely a top 15 tight end in the NFL, and is a solid all-around player that fits perfectly into what the Rams like to do offensively. That being said, the lack of depth and experience brings the groups grade down as a whole. The backup role will be a training camp battle between Kendall Blanton and Brycen Hopkins, two young TEs who happened to be sprung into large roles in the Rams postseason run last season. Blanton, most notably, stepped up big time in the NFC Championship following HIgbee's injury, proving he can be serviceable at the position. What Blanton lacks in speed he makes up for in size, and showed some flashes in run blocking in the playoffs, a part of his game that was seemingly a weakness. His competition will be Hopkins, someone who we've seen very little of up to this point. However, the sample size happened to come in the biggest game of the NFL season, a game in which Hopkins was a key contributor in the GW drive of the Super Bowl. Then there is the project Jacob Harris, who Rams fans saw only on special teams this season. Coming off an ACL injury, it would be far too optimistic to expect Harris to take some massive leap in year two, especially considering the fact Head Coach Sean McVay is still trying to figure out whether Harris is a tight end or a wide receiver. All around, the group is very average in my eyes.

With the retirement of Andrew Whitworth, many non-Rams fans are assuming the offensive line is going to suffer a big drop off in terms of stability and production. But, that is far from the truth, as three starters will be returning in David Edwards, Brian Allen, and Rob Havenstein at their respective positions. Filling in for Whitworth at the important left tackle role will be Joseph Noteboom, a certified baller who stepped in at every position except center whenever the Rams had linemen go down. Noteboom proved he can play with the best of them when he was called upon in the divisional round against one of the best pass rushes the league has to offer in the Tampa Bay Buccaneers. Noteboom gave up 0 sacks and only 1 pressure against the likes of Shaq Barrett and Jason Pierre-Paul, pretty good for a "backup". The only question mark will be the right guard spot, as the Rams lost starter Austin Corbett to the Carolina Panthers in free agency. The starter will be determined in a camp competition between Bobby Evans, Coleman Shelton, and rookie Logan Bruss. I believe the Rams used their first pick of the draft on Bruss for more than just depth, which is why he's my pick to win the battle in for the right guard spot in camp. The biggest question mark for this group will be depth at each spot, which is what ultimately prevents me from giving them a B grade.