Good evening, Rams’ fam! Saw things were a lil sparse today when I got home from work, so I figured I’d whip up an open thread and catch up with the TST faithful.

If You Could Have One Player...

A weird hypothetical, I know, but if the Rams could have any one CURRENT player from another team in the NFL, who would it be?

I’ve got to think a game-changing wide receiver is up there, but there are plenty of options. Who ya got?

Is There Such a Thing As a Good Sequel?

When I got home, Anchorman 2 was on. I - as a fan of Will Ferrell - felt obliged to turn it on. But here’s the deal...it’s not as good as the first. Neither was the second Hangover movie. Dumb and Dumberer....give me a break. And these are just a few, and comedies at that.

The latter Star Wars flicks were better, in my opinion. But oftentimes sequels suck. Let’s hear about another sequel that was better than the original. Good luck!

Does the NBA Suck?

I’ll admit, I’m not the hugest of basketball fans. I root for my Wizards, but I can’t say that I’m a well-versed NBA fan. Truth be told, I’m at the point where watching the NBA Finals is pretty much all I need to see.

When I saw Kevin Durant sign with the Warriors, who’ve been to back-to-back NBA Championships, my interest in basketball shrank to an all-time low.

Maybe I’m out of line (more so ignorant), but I remember the NBA nixing a trade that would’ve moved Chris Paul to the Lakers. How in the Sam Hell (<--- who is that?) do the Warriors land one of the best players in basketball?

I already know I don’t need to watch any regular season game next year. I can wait until the finals to see Durant’s Warriors face whoever...

You know I love these. One of these is about to happen to you...

A) Speared in the center of the spine by in-his-prime Ray Lewis, or

B) Hit in the baby-maker with a Nike Vapor driver by in-his-prime Tiger Woods?

C) Uppercut to the chin from in-his-prime Mike Tyson

I wouldn’t consider myself a serious bobblehead-er, but I’ve got a few. I’ve got several Nationals’ baseball players, a Wizards player or two...and I’ve got a Sam Bradford bobblehead complete with broken arm.

Today I received a trio of Rams’ bobbleheads in the mail from a very nice Twitter pal of mine (Laurie Brown). I’m welcoming JL55 and the Long Bros. to my household. 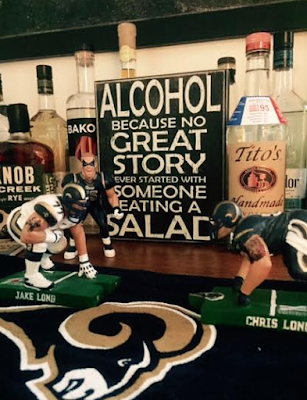 What’s your most prized Rams’ possession?

Mine has to be an autographed Marshall Faulk jersey. He’s my favorite player...in the history of ever. I also have a game-worn Isaac Bruce jersey. That’s a pretty damn close second.