At any rate, I had a few spare momentos (I can’t stop), this evening so I thought I’d whip up a quick open thread to keep things fresco (even I can’t give myself a break).

Aight...now this is where hablamos. Let the rhythm take you over, hablamos.

Hell, you can be having scotch for all I care...just tell me whatcha drankin!

Does the Number Thing Bother You?

Rookie WR Mike Thomas has decided he’s going to wear the No. 13 in 2016.  It’s a popular number...and not because it just keeps being vacated by WR’s (howdy, Chris Givens!)...but because it was once born by soon-to-be Hall of Fame quarterback Kurt Warner.

People don’t dig the fact that’s it’s still available to Rams’ players. Does it bother you?

Which Undrafted Free Agent Are You Pulling For?

The Rams, having had a very small draft class, nabbed themselves 19 undrafted free agents.  It’s always exciting stuff to see the underdog succeed. Which one of these youngsters, listed below, are you pulling for most? 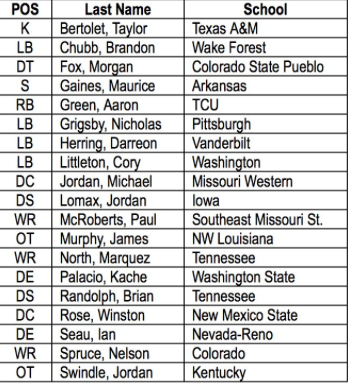 If the Rams Could Have Any Former Player Right Now, Who Would You Take?

Pick a player...any player. Pick a player from any LA/STL Rams’ team, from any year, and help bolster their roster.  You only get one though, amigo!

It’s a would you rather (which you know I love) of sorts, but let’s assume you’re stranded on a deserted island.  You can have three people with you...three very specific people....who meet the following criteria: