With Goff in the Fold, Rams Must Subtract a QB |  ESPN

With the 2016 NFL draft complete, the Los Angeles Rams have four quarterbacks on the roster. They won't carry that many this season, which means somebody has to go.

Are the Rams a Playoff Team with Goff? |  Sports Illustrated

SI's panel of experts breaks down the Rams' selection of Jared Goff with the top overall pick in the NFL draft.

Fans are excited about the Rams, and they appear to be excited about Goff possibly taking over as the franchise quarterback in short order, too. But perhaps no one is more excited than the Goff family, namely father Jerry Goff.

At first blush, the pairing of quarterback Jared Goff and the Los Angeles Rams doesn't make much sense from a schematic standpoint.

Are the Rams A Playoff Team with Goff?

SI’s panel of experts (Chris Burke, Don Banks, Andy Staples) breaks down the Rams’ selection of Jared Goff with the top overall pick in the NFL draft. The comparisons with Teddy Bridgewater and Ryan Tannehill is explored. They have concerns about making the transition from the spread offense. They don’t see the Rams making the playoffs.

The Rams moving to Los Angeles will be a homecoming for six-year veteran linebacker Akeem Ayers. Before spending the beginning of his NFL career with the Tennessee Titans, the Los Angeles native played for UCLA and Verbum Dei high school.

What do Cal fans think about Jared Goff now that he's a Los Angeles Ram?

Donte Whitner has been preaching patience for weeks. But he says his signing with the Rams is coming soon.

Only because it’s just so darn funny...(photo via Rob Tornoe, Philly.com) 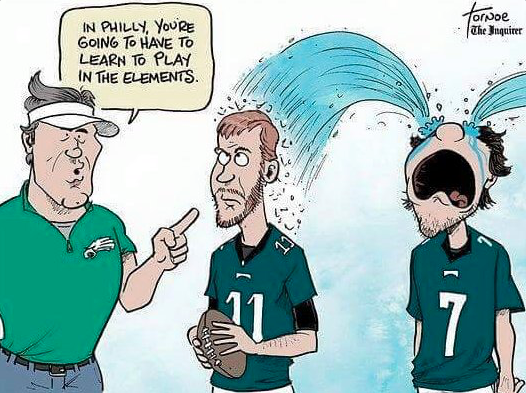