In a quickly posted Snapchat, RB Benny Cunningham indicated he re-upped with the Los Angeles Rams for at least the 2016 season.

So when Rams RB Benny Cunningham posted a picture of a new contract with the Los Angeles Rams on Snapchat...

Nah, playboy. You might be NFL quick, but you ain't internet quick. 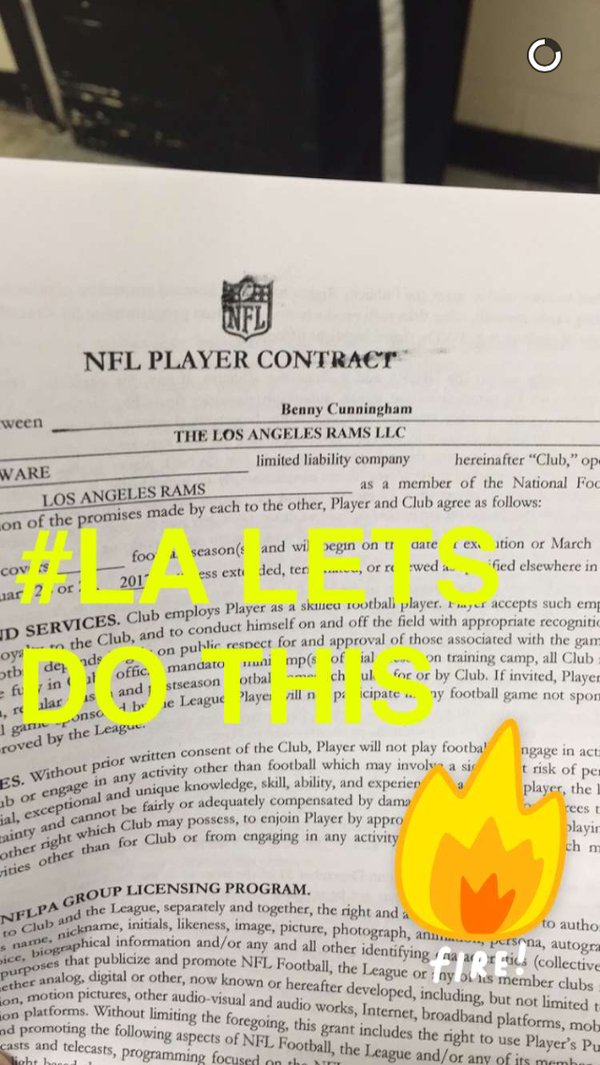 Without anything to confirm it as of yet, there's nothing entirely official to back this up...then again, he did post it himself. Being able to feed real news to the media hierarchy is as old as the NFL itself. Ok, well...maybe not since the 1920s, but it's been part of the process since the first Super Bowl.

In any case, it's an interesting deal.

The Rams are going to lean on Todd Gurley not only as their starting running back, but as the face of the offense and arguably the face of the franchise in 2016. Tre Mason, a third-round pick in the 2014 NFL Draft, was arrested in South Florida nearly a month ago today. His playable status to open the season remains yet unresolved.

Both Malcolm Brown and Chase Reynolds remain unsigned free agent RBs who stacked up the position in 2015.

Cunningham latched on to the Rams as a UDFA following the 2013 NFL Draft. After a slow burn to spell Daryl Richardson and Zac Stacy, Cunningham exploded for 181 yards total between Weeks 8 and 9 in his rookie season. He since spelled the RB depth between Richardson, Stacy, Mason and Gurley to 150 rushes and 647 yards notching four touchdowns (though none last year). To date, Cunningham has averaged more than 4.25 yards per carry.