Share All sharing options for: Tuesday Evening Open Thread: BPA or Need...What Are They Really Doing?

Good evening, Rams’ fans.  Hoping this one finds you well. I wish it were some breaking news I was bringing your way, but sadly it’s just another "slow news day."

Tonight I was hoping we could chat about how the Rams approach the draft. There’s what we’re told. There’s what we perceive. And there’s reality. And none of them really seem to jive.

Les Snead has said, on several occasions, how he doesn’t like to draft based on need as it makes them [or any team] seem "desperate."  He notes how being desperate leads to poor decision-making.

I think we can all appreciate that. Most would agree that building through the draft is the way to go. And when you’re on the clock in the 1st, 2nd, 3rd round you have to make sound decisions.  As a fan of the team, I appreciate Snead’s mentality here.

But is it what really happens?  Or does he truly buy into it?  Surely the Rams can’t be drafting BPA [best player available] in every round.

Whether or not he’d admit it, the Rams draft based on need at some point, right?  We’re not all crazy people for thinking they need positions X, Y, or Z.

It has to be a mix of both.  But when would you say they abandon their "big board" and start addressing needs...if you think they do at all?

I present to you the last two drafts for the St. Louis Rams: 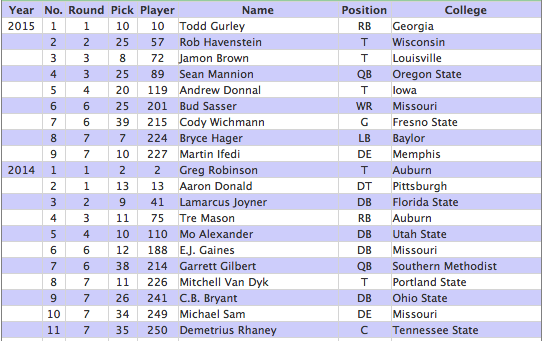 I won’t pretend to know what the Rams’ board looked like in either year [though I think it’d be awesome to see them in hindsight], but these two drafts look very different, don’t they?

I’d venture to say that offensive line has been a big need in both years, and the Rams approached them in different ways in 2014 and 2015.  In 2014, they took the best offensive tackle in the draft. Exactly what you’d want them to do. And Greg Robinson could’ve been the top player available on their board.

Or maybe he wasn’t.  I don’t know, and again won’t pretend to. I feel pretty good about saying that they used that mentality at 13, however, when they took Aaron Donald; whose position certainly wasn’t atop the list of Rams’ needs.

And neither was a running back in 2015, yet Rookie of the Year/Pro Bowl RB Todd Gurley still graces the roster.

But look at how differently they approached the offensive line in each year.  It was definitely a need in both years, right?  In 2014, they used the 2nd overall pick, but only added additional O-line help in the 7th round.

2015 was a completely different story. They’ve stated Todd Gurley was the top player on their board, so we know they went BPA with that one.  But was that the case when they selected Rob Havenstein, Jamon Brown, Andrew Donnal, and Cody Wichmann?

I’m not so sure about that. I think it’s quite possible they took four offensive lineman last year because they did indeed need them.

Do the Rams use BPA early and then go for need afterwards, despite what may appear "desperate"?

I’m of the mindset the Rams are taking the "BPA early" approach, only to succumb to their needs when in mid-late rounds...at least that’s what I think I saw in 2015.

What do you think?  And why would the BPA approach not be applicable in late rounds?  Let’s chat it up.