If the Denver Broncos want Paxton Lynch more than the Los Angeles Rams do, maybe they’d be interested in swapping spots in Round 1 of the 2016 NFL Draft...

Share All sharing options for: Los Angeles Rams Draft Day Trade Hypothetical: Trade Down to 31 With the Denver Broncos

The Los Angeles Rams and Denver Broncos are two teams that find themselves in completely different situations heading into the 2016 NFL season. The Rams are approaching the NFL Draft with several positions to fill, while the Broncos are still in "win now mode," and may just be one player away.

But that player is a quarterback.

Peyton Manning retired. Brock Osweiler left Denver to join the Texans. But the Broncos have the best defense in the NFL, and loads of talent on offense.  They may not, however, have a key piece that can get them back to the Super Bowl in back-to-back seasons. And certainly the thought of repeating would entice them to be aggressive in addressing the situation.

I know, I know. The Broncos are trying to work out a deal with Colin Kaepernick. But if the $4.9mil that’s holding the deal up ultimately puts that trade to rest, the Broncos may look in another direction.

It’s completely hypothetical, but what if the Broncos thought Paxton Lynch could be that guy, and were willing to move up to 15 where the Rams are currently slated to make their selection, to get him?

Utilizing the draft trade value chart, the Rams would stand to gain [roughly/at least] an additional 2nd and 3rd round pick [and maybe a 4th if they’re feeling greedy] for dropping down to 31; the last pick in this 1st round. Let’s assume they just do it for a 2nd and 3rd... 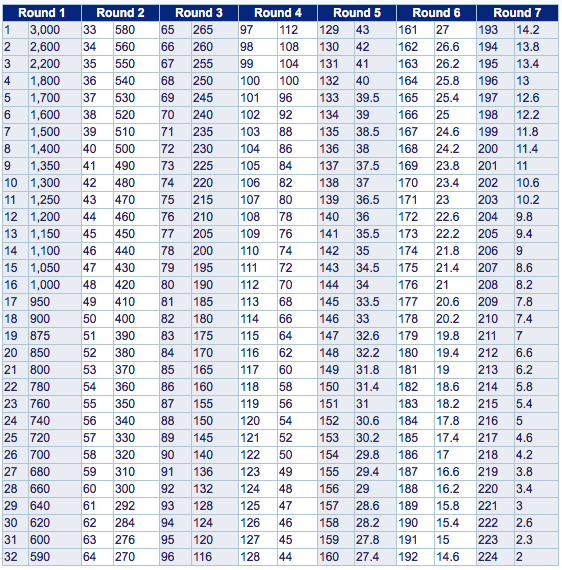 In this scenario, the Rams would swap first round picks with the Broncos, giving them:

The Rams would go from six picks in this draft to having eight, six of which would be within the top 100.

A drop from 15 to 31, however, is steep. But that’s not to say the Rams couldn’t turn around and use, let’s say, the extra 3rd round pick to move back up in Round 1 if they wanted to.  Packaging the 31st pick [600 points] plus the third acquired from DEN [94th overall; 124 points] means they could potentially move back into the 24-26 range. Coupling 31 with the added 2nd from Denver puts them somewhere around 19, not far from where they originally were picking, but with an added 3rd round pick.

Then again, if Lynch is there at 15, given their own need at QB, would the Rams be wise to stay put and draft him themselves?