Good evening, Rams’ fans. Hoping this one finds you well. Not much happening in terms of Rams’ news today, so I thought I’d whip up a quick open thread to freshen things up around TST.

Truth be told, Doug’s been hogging the front page all day, and that’s just bad for business.

So, what’s happenin? Let’s talk about anything and everything...

Jon Jones, whose brother Chandler plays for the Arizona Cardinals, takes on Ovince Saint Preux in the main event of UFC 197 on Saturday. Who might that be, you ask? Exactly.

I don’t know either, but I’m betting there’s going to be plenty of blood splatter tonight. Are you watching?

Getting the Band Back Together...

I found this little ditty on Instagram.  Check out these former Rams who were all hanging out earlier on Saturday! 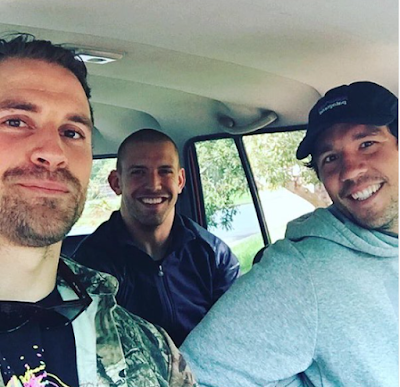 What Percentage of You Believes...

...you know who the Rams are going to draft on Thursday?  I’ll admit, I grow a little more skeptical each and every day. Goff, Wentz. Wentz, Goff. I’m convinced that it’ll be a quarterback, but I’m just not sure I’m buying what they’re selling.  Are you sure?

Greg Cosell, over at Yahoo! Sports, brought up a very good point about Goff that made me question whether or not he’s the guy...HALP!

It’s Saturday night. Surely you’re enjoying an adult libation, no?  I’m having a 90-Minute IPA by Dogfish Head Brewery.  They’re based out of Delaware, so they might not be available in your neck of the woods. But, if you ever see one on the menu (or anything by Dogfish Head) I’d strongly suggest giving them a try.

At any rate, what’s your beverage of choice this evening?

You know I love me some "would you rather" situations...and I may have already done this one, but fuggit. If you were stranded on a hot, desert island...the sandy ones with lots of hot ass sun just baking you...and where you’ll have to work for food:  what is the one condiment you’d like to have if you could have an unlimited amount?

From My High Horse...

What the fuck is Tre Mason doing? Does this cat not care about his future in the NFL, or am I just misreading what’s going on? He’s getting arrested. He’s getting his baby-maker tased. He’s missing court.

Meanwhile, I’m seeing a lot of guys - like Trumaine, Tavon, Gaines, Roberson, Stedman - on Instagram working their asses off in preparation for the 2016 season.  This is what Tre’s up to...


I dunno...maybe he’s grinding more than he’s posting. There’s just not much that’s got me optimistic about his future with this team at this point.

You’re only getting one sammich for the rest of your life. What’s it gonna be?  And don’t try to get all fancy with the cheese, a-hole. You get kraft.