The Boys Are Back! [VIDEO] | Rams’ Official Site

The Los Angeles Rams are back and ready to grind. Watch highlights of the first phase of the offseason workout program.

How a Deal for One is Done |  MMQB

The Titans and Rams pulled off one of the biggest trades in NFL draft history. Here’s how it went down, from a serendipitous situation at the combine to the transaction’s consummation in the cab of a pickup truck

Eagles Make Blockbuster Trade, Moving Up to No. 2 in the 2016 NFL Draft

#Eagles have agreed to a trade with the Cleveland Browns to acquire the second-overall pick in the 2016 NFL Draft. pic.twitter.com/SdJSegMy4m

Pat Kirwan and Jim Miller reviewed the QB class as a whole earlier this week, but I dug a little deeper on Goff for this piece.

The Rams traded up for the No. 1 pick. While they get to pick who they want, they also get a big business bump too.

Last year, the Rams and Eagles decided that Nick Foles and Sam Bradford, respectively, would solve their problems at quarterback. Now, both teams have made blockbuster moves to the top of the draft, in the hopes of acquiring the quarterbacks that Foles and Bradford will never be.

We asked 13 of ESPN's NFL writers, analysts and front-office experts to pick the best quarterback in the draft, Goff or Wentz, and to explain why one of them is ahead on their draft board. The results are below, and you can cast your vote here.

There isn't much waffling among NFL teams. It seems to be a known deal in league circles that the Rams will take Goff at No. 1 overall, according to sources with four different teams. One individual even declared it a "done deal."

The Rams say they haven't decided whether they'll take Cal's Jared Goff or North Dakota State's Carson Wentz, but reading between the lines and listening to what others in the NFL are saying, it becomes clear there's only one choice. 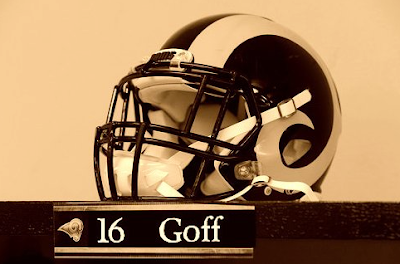 If the Los Angeles Rams at No. 1 and Eagles at No. 2 each take a quarterback, it will be the seventh time in the common draft era (since 1967) that QBs will have been selected 1-2 overall.

ESPN NFL senior writer John Clayton breaks down which general managers will have their picks most scrutinized in the 2016 NFL Draft. (1:17)

Mel Kiper Jr. and Todd McShay debate whether QB Carson Wentz is worth trading up to #2 for. (1:59)

Jeff Fisher Says Team In Position To Draft Franchise Player at No. 1

Donte Whitner Hinting At a Possible Signing With the Rams?

Great things on the horizon

NFL general managers don't let their best cornerback walk away. They also don't cut the best player in franchise history when he still has some good years left.

Norman drawing interest from the 49ers, who currently have $52.6M in cap space...