In 2009, the St. Louis Rams used the 2nd overall pick in hopes of protecting their QB's blindside for years to come. That plan backfired.

In 2009, the St. Louis Rams used the 2nd overall pick in hopes of protecting their QB's blindside for years to come.  That plan backfired.

Before unveiling the next brutal draft pick of the St. Louis Rams era [1995-2015], let’s take a quick look at the Top 10 countdown thus far, courtesy of our very own Sean Wilkinson.

Matthew Stafford was the first overall pick in the 2009 NFL Draft.  And now, going on eight seasons later, you can still find him taking starting snaps for the Detroit Lions.
Following a 2-14 season in 2008, the St. Louis Rams had the 2nd overall selection in 2009.  They chose Baylor left tackle Jason Smith.  It was, at the time, a sound decision, and one the team made in hopes of replacing now Hall-of-Fame tackle Orlando Pace.
Prior to the 2009 draft, as you would imagine, Smith received extremely high praise.  And for a team that had struggled to win for several seasons, the thought of landing a premier tackle who could protect an often bludgeoned QB’s blindside, potentially for the next decade, made it a simple decision.
Here’s what one NFC General Manager, who requested* to remain anonymous, had to say about Smith in March of 2009:

He is really one of those 10-year left tackle type guys. He is really in my eyes a No. 1 guy.  You'd love to have a guy like that.  He's a Walter Jones left tackle who could play forever. He's got it all with the size and athletic ability.  He's clean.

*wisely requested to remain anonymous.
That GM - sadly for Rams’ fans - proved to be very, very wrong.  Smith’s first three years, which was the entirety of his tenure in St. Louis, were disappointing; not only due to injuries, but excruciatingly poor performance while on the field.
In his rookie year, he was sidelined for half the season after suffering a concussion against the Arizona Cardinals.  He’d play 15 games in 2010 - hoping to protect the Rams’ newest asset Sam Bradford - only to lose the starting job to Rodger Saffold.  By year three [2011], in which he played in only six games, the writing was on the wall.  The Rams, and their fans, knew they’d been sold a bill of goods.
At the conclusion of the 2011 season, Smith was traded to the New York Jets in exchange for offensive tackle Wayne Hunter.  I’d say "thanks for nothing," but Smith wasn’t completely devoid of use. 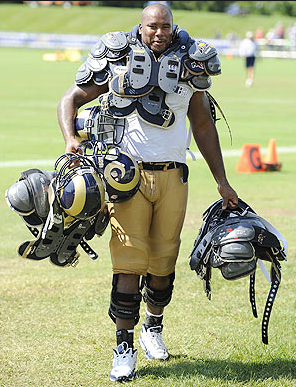