What’s up, Rams’ fans?  There’s not a whole lot poppin’ today in the NFL world, but I’ll try to piece a few things together that maybe we can argue with each other about.

I thought this was pretty funny


Speaking of Kaepernick, it’s a bit difficult to tell if Chip Kelly - the 49ers new head coach - really wants Kaep to be running his offense in 2016.  And for that reason, I guess it’s worth speculating whether he’d be worth a look if he were to hit free agency.

You guys already know my thoughts on RG3.  Who would you rather have?

I posted a few things on Twitter that I’m not sure ever made it on the site...

Did you know when the Rams’ released Long, JL55, and Cook, the NFL’s youngest team got rid of three out of it’s six oldest players?  And some of these other old cats won’t be back either...

The #Rams are the youngest team in the NFL, and they just got rid of 3 of their 6 oldest players. More cuts coming. pic.twitter.com/la44vW83OM


I think I rushed when I worded this one - and believe me I’ve heard from folks about it - but these are the first round picks made whilst Jeff Fisher has been the coach of an NFL team.  What do you think about this bunch?

EVERY 1st round draft pick Jeff Fisher has made as head coach. #Rams pic.twitter.com/NBnnftUxGy

Have We Seen The Last of Johnny Football?

There’s apparently video footage of the altercation between Manziel and his girlfriend while at a Dallas Hotel recently.  I don’t imagine it’s anywhere near as bad as the Ray Rice video [based on the story that’s been told], but then again, all domestic abuse is terrible.

The video will eventually be released.  And if it does, and he busts her eardrum like the reports say, have we seen the last of Johnny Football?

Is Nick Foles not a Jaws reincarnate? 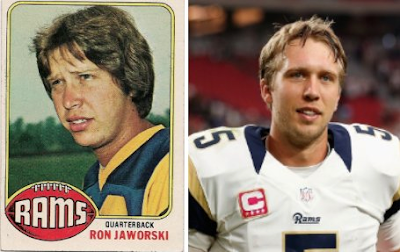 We talk a lot about the Rams should do with their first four picks...probably because they’re the ones who’ll [we hope] make the most impact.  But what should the Rams do with their final pick [6th round]?
Any particular player[s] you’d like them to take a shot on?  Maybe that "hidden gem" type player is their in the later rounds?
Is it time to get a new kicker.  Greg Zuerlein sucks.  Blair Walsh won that nickname fair and square.
Maybe they can bundle it with another pick and move up a few spots if necessary.
At any rate, that’s enough from me.  Now you talk.

Ian Rapoport tweeted this out earlier today.  Is he right? I’m not sure I’m buying what he’s selling...

Thought after yesterday's #Rams release of Chris Long, others: Expect to learn a lot about DL Ethan Westbrooks, who steps into the spotlight

In the words of the great Zac Stacy, "Yikes"