Los Angeles Rams: Defensive End Is the Way to Go In Round 1 of the 2016 Draft

Share All sharing options for: Los Angeles Rams: Defensive End Is the Way to Go In Round 1 of the 2016 Draft

I’ll preface by saying this...I’m not opposed to the thought of the Rams drafting a defensive end with the 15th overall pick.  NOAH SPENCE, FOR THE WIN!  You’ve probably heard/read me say it.  You’re probably tired of hearing/seeing me say/type it.  And I get that.

It does sound silly, right?  I think we’re all in agreement that the Rams’ biggest issues lie on the offensive side of the ball.  Quarterback is the most important position in the game, they don’t have a stud wide receiver, and while much improved, no one can say the Rams’ have a strong offensive line.

On defense, you’re almost critiquing players for the sake of doing it.  They don’t have Pro Bowl-ers at every level, but it’s not all that far-fetched to think they could.

So what’s with this defensive end booty chatta?

Well, here’s how I look at it.  I’ll tell you why, and then I’ll hope you’ll provide me with some feedback on just how crazy the notion is.  And maybe it’s not that it’s crazy...just not what you see as the right move.  Again, to each their own.

First off, I spend quite a bit of time here on TST reading comments from the fans -- you guys and gals.  Why not?  You’re just as in touch with the team as I am, and you’re opinion certainly carries as much weight.

That said, I can’t tell you how many times I’ve read "Chris Long needs to go."  Ok.  That’s fair.  I don’t agree, but I understand it...even if only for fiscal reasons.  I’ll say this though.  The guy has intangibles that can’t simply be replicated by youth or "upside."  He’s literally said he’ll take a pay cut to stick around.  Chris Long WANTS to be a Ram.  But again, I understand your sentiments on releasing him.  It’s a business...yada, yada, yada.

So assuming he’s released/traded/whatever...what’s the plan?  And that’s where the thought creeps in for me.

First off, regardless of how desperately the Rams need a quarterback, I don’t see them drafting one in the first round.  It’s just a hunch, and therefore my opinion should be treated as such.  And yet for some reason, I feel very strongly that I’m....I don’t know...right?

There seem to be a lot of questions regarding this crop of first round QB’s, and even the guy atop the heap - Jared Goff - isn’t being sold as a surefire Week 1 starter.  Shit, neither was Tom Brady...so you can spare me that one.  We don’t know, right?  Of course we don’t.  But it doesn’t sound like the Rams are going to be acquiring a Week 1 starter...and they’re not even in a position to get the top prospect.  They’d, in all likelihood, get the THIRD best guy.

So they’re drafting a developmental quarterback?  A guy who can help them...down the road?  Yeah, that’s what I want to do with a first round pick.

And why wouldn’t Sean Mannion be the guy?  The Rams knew they were going into 2015 with Nick Foles as their starter, and Case Keenum right there with him.  So they took Sean Mannion in the 3rd round of last year’s draft.  Foles sucked.  Keenum wasn’t much better.  But Mannion was given no chance.

Have they no faith in Sean Mannion?!?  A third round pick isn’t something you just toss aside.  And let’s not play...I’ve seen plenty of you discuss how Mannion potentially "got better" last year, learning the offense/playbook, practicing with team, and all that jazz.  So if that’s the case, why isn’t he the guy for 2016?  Hmmm....

Right about now is where I’m guessing I should address the "a first round pick equates to success."  It doesn’t, and if you’ve been a Rams fan for ooooh, let’s say, five years or so, then you know it doesn’t work that way.

The last open thread I posted, which was earlier this week, kinda proved my point.  It was a small sample size, but the fact remains....people just want a first round quarterback and they don’t even care which one. 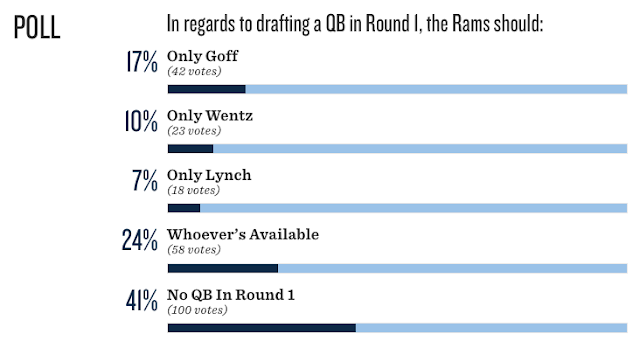 It, apparently, matters more that they take one for the sake of doing it than who they actually take.  And that, to me, is what’s truly silly.

I feel like - a few cocktails in here - I may be getting off topic, so let me get back to it.  I think drafting a defensive end in the first round of the draft isn’t that bad of an idea.  As a matter of fact, I think it’s a better idea than taking a quarterback; ESPECIALLY if Long isn’t in their plans for 2016.

*  If Chris Long is gone, I think we could really use a young beast of a pass rusher to play opposite Robert Quinn.  Sure, defense is our strength, but why allow it to simply get weaker?  I’m positive Jeff Fisher agrees with me here.

*  I don’t think the Rams will find their answer at Quarterback by simply taking "whoever’s left" at quarterback with the 15th pick....and there are certainly no guarantees they would if they traded up for that matter.  Then again, I understand that applies to all draft picks.  I just think the Rams need theirs.

*  A QB taken at 15 might not even be under center in Week 1, while guys like Laquon Treadwell, Noah Spence, and several other players stand a very good chance of lining up.  A perennial 7-9 team shouldn’t be waiting on a developmental quarterback...unless you think Paxton Lynch is really Cam Newton.

*  Even if the Rams passed on Treadwell, who’s the clear top WR prospect in Round 1, they’d potentially have a shot at Josh Doctson, Tyler Boyd, and Corey Coleman in the 2nd.  All Week 1 starters who make the Rams better on offense.  And let’s say they took Noah Spence at 15....would getting TWO of the guys I mentioned in Round 2 satiate your need for wide receivers?  Imagine having Josh Doctson AND Tyler Boyd.  The Rams have doubled up on WR’s before...

*  Lastly, and most importantly, mock drafts are always wrong, and therefore you’re probably wasting your time/emotions on a quarterback. I’m, in all likelihood, wasting mine on a defensive end.  Either way, I’m not sure many saw the Rams taking a running back with the 10th pick last year.  And for that reason, I’m fully prepared to be surprised on April 28th.

And if none of this jibba jabba was worth reading, I hope you’ll at least give this highlight reel of Spence - at Ohio State and Eastern Kentucky - a gander.  You probably won’t see any other football this evening.