Los Angeles Rams: Matt Leinart Wants Out of the Hot Tub and Into the Huddle

The Los Angeles Rams don’t need to draft a QB in the first round. They’ve got one willing to walk on...

Share All sharing options for: Los Angeles Rams: Matt Leinart Wants Out of the Hot Tub and Into the Huddle

If you were to use Google’s search engine to search for the words "hot tub" you’d undoubtedly get results that directed you to links for hot tubs.  Interestingly enough, if you were too also Google "Matt Leinart" you’d...well...you’d see pictures of a hot tub with Matt Leinart in it.  And Leinart won’t be alone in the hot tub, nor will he be rehabbing.  He was being an NFL quarterback.

Where am I headed with this?  Well, as of now it’s probably not news that Stan Kroenke has decided to take the Rams back to Los Angeles.  And that move, along with his words and actions, sparked plenty of reactions - some from the Rams’ players themselves - on social media on Tuesday.
There was one in particular that stood out to me.  One that could help the Rams start winning as soon as 2016...

Hey Jeff Fisher I'll be working out here in the South Bay. Give me a call! #footballinLA #neighbors

So Matt Leinart, 10th overall pick from the 2006 NFL Draft is interested in playing quarterback for the Rams.  He’d undoubtedly have to knock of some rust, considering he hasn’t played football for the last three seasons.  And then, once the rust was knocked off, he’d have to get back to USC Trojan form...or else Rams’ fans might get more of the same from pro-level Matt Leinart...
Regardless, the Rams will probably look for some help at the quarterback position in 2016, and it would in all likelihood come through the draft.  That is, of course, unless Jeff Fisher sticks with Case Keenum as his quarterback; who he said will remain the team’s starter heading into the offseason.
Only time will tell, but the Rams have options.  They could stick with the Case Keenum.  They could try to get Nick Foles’ morale/play back up in hopes of another magical 2013 type season, or they could develop Sean Mannion, whom they drafted in the third round last year.
Or they could take Matt Leinart up on his offer to set down his drink, climb out of the hot tub, dry off, and get back to being a Top 10 quarterback in the NFL.  Oh wait, he never did that.  He could get back to being a quarterback in the NFL.  Yeah...
Orrrrrrrr, the Rams could get a newer, more exciting, better at actual football version of Matt Leinart.... 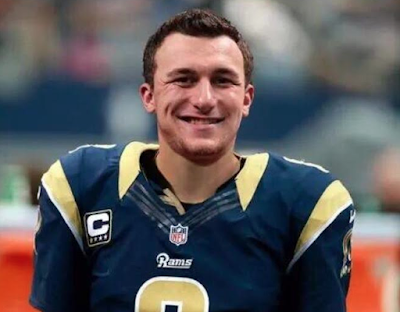