Anatomy Of A Play: Lance Kendricks Goes Blind on a Gorgeous Play Design

The results have not been there the last two weeks, but the play design has. Frank Cignetti is getting opportunities for his playmakers -- now they have to make the plays.

Share All sharing options for: Anatomy Of A Play: Lance Kendricks Goes Blind on a Gorgeous Play Design

It has become de rigueur to slag on the Rams' offense in the Jeff Fisher era. And it's easy, too. He always talks about running the ball (even though he doesn't actually run the ball that much), and he likes to publicly pat his players on the back after pretty piss-poor performances.

But here's the thing: this offense is not the same, by design, as it has been. Frank Cignetti may not have changed much of the language from Brian Schottenheimer's playbook, but somehow he's taking the same language and creating a much more sophisticated offensive vocabulary.

The scoreboard hasn't shown it in the past two weeks, but Cignetti is creating opportunities in the passing game that simply were not there in the last few years. The eight pass plays of 20+ yards from week 1 alone amounted to a month's worth under Schottenheimer.

Unfortunately, as an offensive coordinator you can draw up a play that perfectly fools the defense, but your players still have to execute. Case in point: this third-quarter pass from Nick Foles to Lance Kendricks that should have gone for an 45-yard touchdown. 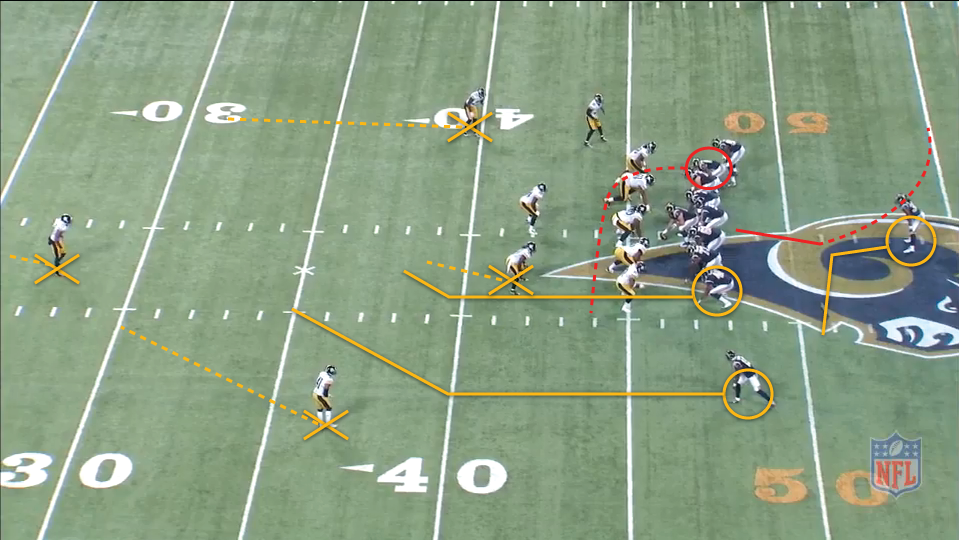 The Rams are lined up in 3-1 personnel (3 TEs, 1 RB) with Todd Gurley the lone setback. The Steelers have been keying on the Rams' runners all game long, daring Foles to beat them. They are lined up in a 3-4 defense with a safety and corner on the strong side cheating up toward the line of scrimmage to bring 9 players into the box. Cignetti takes advantage of that here by setting up a play-fake stretch run to the right (bottom of the screen here).

However, instead of staying home to block on the play side, Cory Harkey and Kenny Britt run a pair of complementary routes to clear out the defense from the left side of the field.

Lance Kendricks, who will become the eventual target, is lined up inside of Jared Cook over the right tackle. He is going to masquerade as a disinterested run blocker trying to get to a linebacker on the 2nd level, while Cook stays home to protect Foles. 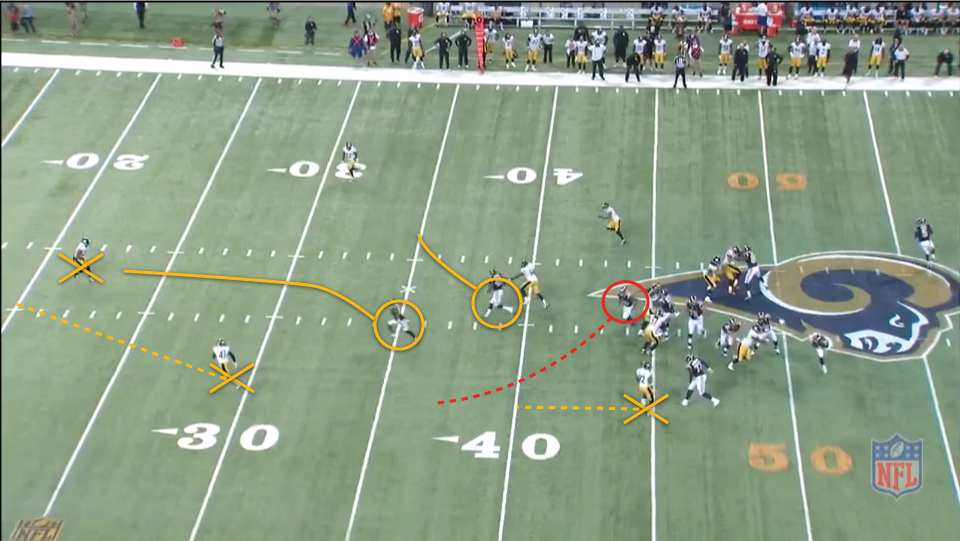 Foles fakes the handoff to Gurley, the entire OL swims outside the tackle box, and most of the defense follows the fake as Foles bootlegs lazily out to the opposite hash, hiding the ball well as he goes.

The high safety is not fooled by the play action, and starts to backpedal as Britt enters his zone as seemingly the most dangerous receiver in the pattern.

Meanwhile, wily veteran James Harrison (92) smells something wrong. Perhaps he gets tipped off when left tackle Greg Robinson fails to engage him as a blocker? Or maybe he notices Gurley's empty hand and starts looking sideways for any suspicious characters in blue. He sees Kendricks here (circled in red) and starts to trail him.

As a side note, the Rams OL's complete inability to generate push in the run game against bigger defenses really helps the play here. Kendricks has an easy time running a route that is approximately two yards off the original line of scrimmage here. Also, Jared Cook is left to block two Steelers here. This play blows up if he doesn't, as Foles won't let go of the ball for another 2.5 seconds. 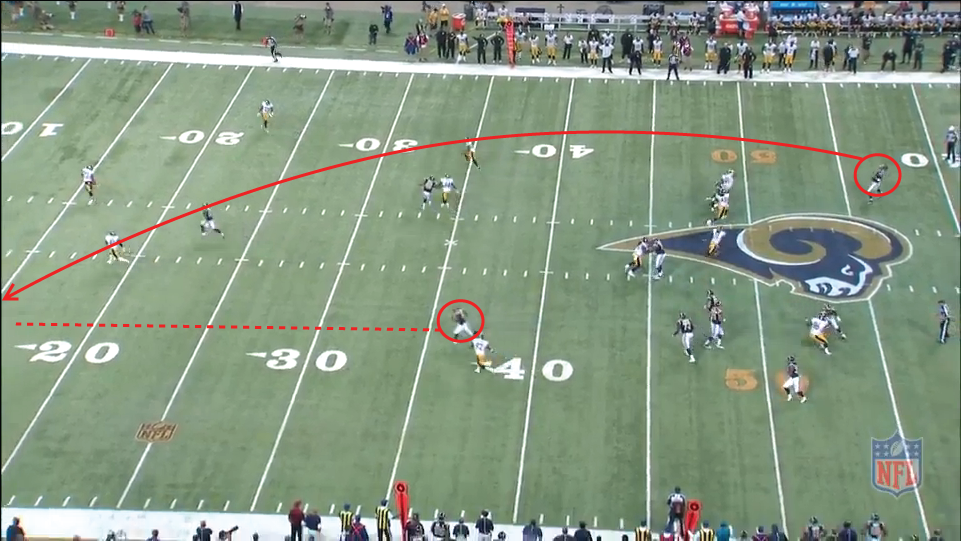 At this point, Foles sees Kendricks turning upfield into an acre of green grass, and corks up a massive deep ball. He is throwing from his own 45 to the Steelers' 15 yard line on the opposite number, with Kendricks still 25 yards away from the target. The fake has been sold completely, the Steelers' defense is way out of position and seemingly the only two things that can prevent this play from becoming a touchdown are a bad throw and the footspeed of a 37-year-old linebacker.

Foles throws a perfect ball, allowing just enough air for Kendricks to run underneath it and square himself for the catch, when ...