The Rams will host the Chiefs in their final preseason game of 2015. This one counts...in a preseason sorta way. 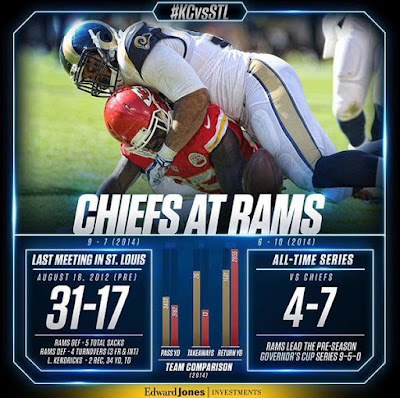 As the 2015 Rams Training Camp comes to a close, check out the highlights from #RamsCamp.

The Kansas City Chiefs are not expected to play much if at all in Thursday's preseason finale against the St. Louis Rams. Chiefs coach Andy Reid said the second team will likely start it off and get plenty of playing time while the third team will finish things up.

Here are five key things to watch as the St. Louis Rams play host to the Kansas City Chiefs on Thursday in their final preseason game.

It happens every training camp: the media gathers around Rams coach Jeff Fisher, asks about his team’s high penalty count from the previous season, then waits for an answer that’s as predictable as a Rams’ false start.

The strength of the Rams’ defensive line was no secret heading into training camp and it is touted as one of the best in the NFL. After three preseason games, some of the unit’s newest members are also making plays.

Hall of Fame running back Marshall Faulk chats with Mike Florio saying he knows Rams fans remember how St. Louis acquired the team, but he remains hopeful the team will remain in the city when the dust settles on NFL move to relocate.

Foles Eager to Have Saffold Back in the Lineup |  Fox Sports

Nick Foles understands how important Rodger Saffold is to the offensive line.

At the intersection of his old job and his new one, war hero turned football player Daniel Rodriguez stood before 22 airmen and women at Scott Air Force Base re-telling his story and offering his appreciation.

Sad. On so many levels.