Here’s your chance to win some free St. Louis Rams’ cups. All you’ve got to do is...

On Friday evening I posted an article here at Turf Show Times stating that I was hoping to give away some St. Louis Rams’ cups that were given to my wife [as a gift for me].  I don’t really need them, so I figured I’d have some fun with it here by giving YOU a chance to win them.

It’s pretty simple...you’ll make predictions based on the two questions below regarding today’s Rams vs. Seahawks game.

1) Responses to both questions must be made in the comments section below.  I’ll be looking for the correct responses in the order in which they’re made/chronologically.
2) You can only post once.  Well, you can post as much as you’d like, but I’m going to take your first response. Remember, there’s an "edit" button for you to use if need be.  This isn’t rocket science though.
3) You can only win one set of the cups.  Each set of cups will be assigned to a question.
4) Predictions won’t be accepted after 1pm ET. I’m using the timestamps attached to your response. Sorry 1:01pm-ers.
5) If, by chance, you get both questions correctly [and you’ve responded correctly before anyone else], I’ll give you the cups of your choice.  I’d then look for the first correct response for the remaining question [closest without going over].

1)  How long will the Rams’ first touchdown [offense, defense, special teams...doesn’t matter] of the 2015 season be? [If no one guesses the the exact number correctly, I’ll utilize the "closest without going over" rule.  For one bold fan, I’ll accept "no touchdown" as a response, in the event they’re unable to score a TD.  First correct response receives a set of SpiritCups. 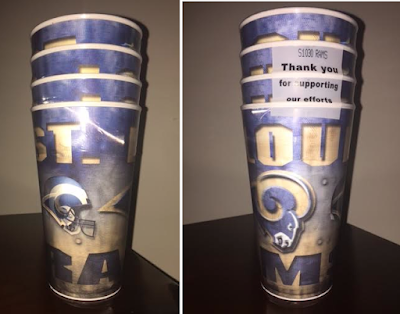 2)  What Will Be the Total Amount of COMBINED Points Scored in Today’s Game? [again, closest without going over if no one’s able to predict the exact score].  First correct response receives a set of SpiritTravelCups. 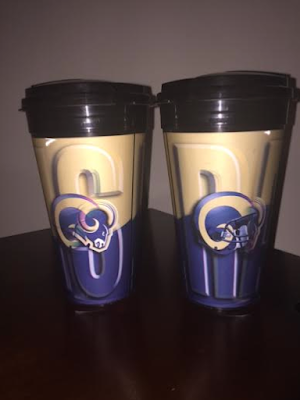 Best of luck in your prognostications, and GO RAMS! After the game, I’ll reach out to you [the winners] in the comments section below.  I’ll need you to email me your address.  Again, I’ll cover the shipping charges.  Cheers!