The Turf Show Times staff takes a stab at predicting who wins the Rams home opener against the Seahawks.

The St. Louis Rams are set to take on the defending NFC Champion Seattle Seahawks this Sunday in the Edward Jones Dome. Here are the Turf Show Times’ staff predictions for the Rams’ Week 1 matchup:

Week one will be the toughest, most important week one the Rams have had in over a decade. Honestly, week one may feel like the SuperBowl for the Rams as they face the Seahawks at home. The Rams have many question marks on the OL and starting off facing a tough defense like the Seahawks isn't doing them any favors. That said the Rams have a D of their own as well and believe they won't get off to the slow start like they did last year. They will give the Seahawks some problems early, but will succumb in the second half as the Rams offensive struggles with many third and long failures, forcing the D to be on the field just too long. At the end of the day it will come down to offensive execution and I see the Seahawks just getting the job done against a talented, yet young team not ready for prime time.

As the sun starts setting and the aspen turns to a poetic.......wait that's 3k's thing. I think we all know that week 1 in the NFL is the toughest to predict, no one knows how teams will play or what the play calling will be like. Fisher doesn't like preparing his teams for the start of the season, so my prediction is based purely off that. I'm also just curious how many fakes the Rams will run to stay in the game.

The Rams defense had better be ready to put forward a complete game against the Seahawks. The offense is clearly a work in progress, and should find it tough to churn out yards against the Seahawks. It is possible Earl Thomas and Richard Sherman will be a tad rusty, but even rusty they are still pretty good. Yes the Rams offensive line is suspect, but the Seahawks may be in even worse shape there. If the Rams are going to spring the upset Quinn Donald and Long are going to need to live in the Seahawks backfield. This should be a good tough game, but without Todd Gurley, and maybe even Tre Mason, the Rams offense will likely settle for 3 too many times.

The Seahawks will have a terrible case of Super Bowl hangover. Their offense, which may have as bad a OL as the Rams, will not be able to move the ball until late in the game when Williams goes into his prevent defense. With the help of turnovers and 4 field goals from Legatron plus 2 safeties from the Rams defense, I see an opening day win.

History is a strong guide here. Russell Wilson and Marshawn Lynch have shown that they can make an offense work regardless of what shape their offensive line is in. Jeff Fisher's Rams ... have not. Seattle traditionally does not travel well, but that shouldn't be a factor in the first week of the season. I feel a 23-13 Rams loss coming, with our only touchdown coming via defense.

The Rams always have something working against them that prevents the team to progress in the win column. This year, and previous years as well, it's the O-Line. Seattle's front seven will feast on that feeble line. Foles will not be able to get anything going on offense. The run game, ha! Nonexistent.

I think the Rams drew the Seahawks at the right time, this year. Continuity, particularly on the backend, has been the under-appreciated key to Seattle's recent success. This year, they've again lost depth in that area, thanks to desperation on the part of other teams, willing to overpay for the Seahawks slot and rotational corners. Tack on (a) some thinning in their defensive line and linebacker rotations, (b) the fact that there appears to be a decent chance that Kam Chancellor won't be on the field for Week 1, and (c) Dan Quinn leaving for the Falcons' head coaching vacancy, and you have a recipe for potential success.... for the Rams.

At the end of the day, the game will come down to Nick Foles not turning over the football and St. Louis' ability to contain Marshawn Lynch, Russell Wilson, and their newest toy, Jimmy Graham. Given the talent on the Rams' defensive line and the question marks across the Seahawks' offensive line, that shouldn't be an issue. I assume it will be a close, low-scoring game (as always), but see no reason why the Rams can't start off the season with a shocker. Greg 'the Leg' from 65 yards for the game winner, anyone?

This whole "slow start" thing has to end, and the Rams being in the EJD helps out. It also doesn't hurt that Kam Chancellor is pitching a pay-day nutty. Look for Jared Cook to have a good game for St. Louis, and Richard Sherman to offer to chip in on Chancellor's pay after Nick Foles burns him deep at least twice. Say what you want, but Sherman knows having someone minding the store deep has made his life easier. Chris Givens is go to slide left to right across the field at least a few times. Tavon Austin very well could be a player to watch in this game too. The "under-the-safeties-seam" could be a possible hot spot for the flashy Austin to do some damage.

On defense, both these team have strong resumes. Look for the Rams and coordinator Gregg Williams to flat out challenge Russell to stay standing on every play. This is going to be a heated game, with tempers flaring as Seattle tries to deal with an uber-aggressive Williams led defense. Interceptions and fumbles will turn this game's tide one way or another.

At this point, I can't see this as anything short of a defensive slugfest. The Rams generally contain Lynch well, and will thus force many Seattle punts.

For the Rams, squaring off our shaky, inexperienced offensive line with the Seahawks bruisers is daunting. Foles may have a rough debut with the Rams as he's constantly pressured, and the run game may have pedestrian success as well due to the same flaws.

With that in mind, the better Wilson-Graham combo is able to put up just enough points to repel the Rams in a hard-fought opener.

The Seahawks will provide quite the measuring stick for the Rams in week 1. They're banged up from back to back Super Bowl trips and have more drama surrounding them than in recent years. But they are still are a very talented team with a chip on their shoulders after last years Super Bowl gaffe.

As you should expect from an NFC West matchup, this game will be supremely physical. I expect it to be a close game with the Rams ultimately prevailing. The Rams have two players capable of covering new acquisition Jimmy Graham - who I think will struggle with the physicality of the game.

With Alec Ogletree and T.J. McDonald keeping Graham largely under wraps, I expect the most talented front 7 in the NFL to limit the damage from the Seattle run game to a minimum. While I think the Rams will similarly struggle on offense, I think that the Rams will make enough big plays to swing the game in their favor. 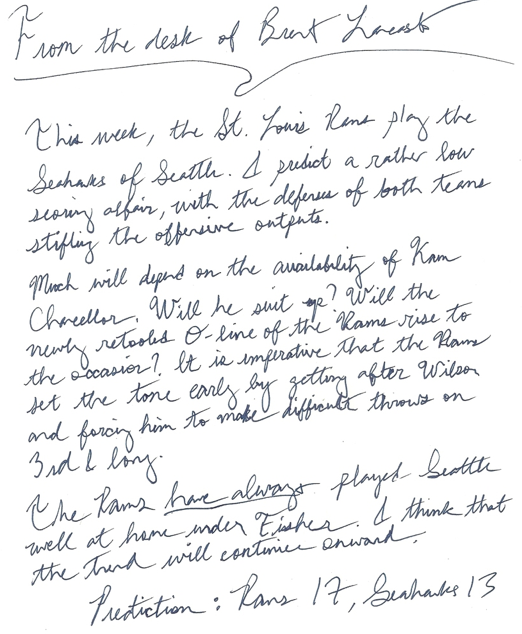 I expect a low scoring game and one that will be close until the waning moments. Over the past few seasons the Rams have played the Seahawks tough at home, securing victory in two out of the last three. It’s going to be a busy day for Greg Zuerlein and I think he knocks one through late in the 4th quarter to make it three wins [out of four] in the Dome.