Over at Grantland, Bill Barnwell put together his annual NFL All-Bad-Contracts team.  It just so happens that one St. Louis Rams’ player made the list.

Barnwell highlights four contract problems:  The Marginal Talent, Paying for the Outlier, System Guy Out of System, and Ever Fallen in Love with a Player You Shouldn’t Have?
For the sake of this exercise, here’s how Barnwell defines The Marginal Talent, the tag given to Rams’ tight  end Jared Cook...

With the NFL salary cap rising by more than $20 million between 2013 and 2015, teams have had more money to spend than they’ve known what to do with. Well, that’s not true, because they’ve known exactly what to do with it: They’ve spent it on moderately impressive free agents. Every year, a handful of players who were available for nothing as recently as the previous offseason sign with new teams for serious money. Most of the time, they’re about as good as the guys who were freely available.

And, according to Spotrac, it’s one of the five biggest cap hits for tight ends in 2015. 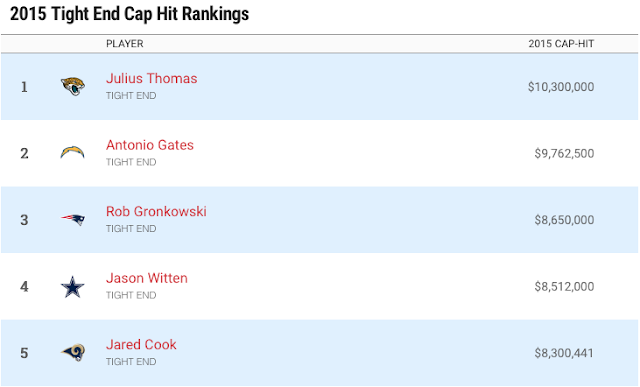 Julius Thomas, who recently left Denver for Jacksonville, tops the list of TE’s in terms of cap hit in 2015.  And while, he’s never played an entire 16-game season, the 27-year old tight end has scored 24 touchdowns in the past two seasons.
Antonio Gates has probably lost a step or two over the course of his 12-year NFL career. That said, he’s still a future hall-of-famer.  Gates has amassed 10,014 reception yards, good for 44th on the all-time list, and he’s one score away from 100 for his career.  He’s been to nine pro bowls.  At the age of 34, Gates put up 821 rec. yards and 12 TD’s in 2014.
Rob Gronkowski is the best tight end in football.
Jason Witten is another future Hall-of-Fame tight end.  Like Gates, Witten started his NFL career 12 years ago [2003], and also eclipsed 10,000 career receiving yards in 2014 [10,502 - currently 35th on the all-time list].  Witten has missed only one game in 12 seasons [his rookie year], and has averaged 79 receptions and 875 yards a season during that span.  10 times a Pro Bowl selection.
And 5th on the list is the player that Barnwell dubs The Marginal Talent...

Please don’t think I saw the flaws in all of these deals when they were first signed; the Cook contract is one I would have endorsed at the time, and it just hasn’t worked out. It’s not hard to see what the Rams saw in the freakishly athletic Cook, who had exhibited flashes of brilliance in Tennessee. The Titans focused too heavily on his flaws and tried to turn Cook into an inline tight end, and so naturally it seemed clear that the Rams were going to try to take Cook and his 4.49 speed and use him as a downfield burner.

It hasn’t quite worked out that way. Cook, who has the 6-foot-5 frame to be a red zone terror, scored twice in his first game with the Rams and has just six touchdowns in his ensuing 31 contests. He’s averaged just more than 40 yards per game in St. Louis, which is actually a decline from his final two seasons in Tennessee, and by the end of 2015, the Rams will have given him more than $20 million.