The NFL felt as though Thursday was as good a day as any to dole out a few four game suspensions...and to some very recognizable names.  Chargers' tight end Antonio Gates won’t be playing for 25% of the upcoming season.  The league also decided that 12 games was enough for Jets defensive end Sheldon Richardson.  And Cowboys’ linebacker Rolando McClain wasn’t going to be outdone by either of the aforementioned; it’s an abbreviated year for him, as well.  Here’s a full list of suspensions for the upcoming season, to include one St. Louis Rams’ player...

Two Rams Make All-25 and Under List |  Gridiron Gateway

The NFL All-25 and Under Team is highlighted by some of the players you might expect like Indianapolis Colts quarterback Andrew Luck, Pittsburgh Steelers running back Le’Veon Bell and New York Giants wide receiver Odell Beckham Jr.

The two Rams that made the cut aren’t big surprises.

This is part of a series -- Finding the Fits -- in which NFLDraftScout.com will review the more intriguing picks made during the 2015 NFL Draft. The goal is to identify one relatively unheralded player per team who appears to be a good schematic fit and, therefore, more likely to be a surprise contributor early in his pro career.

The cost of planning for a new riverfront stadium continues to rise.

This week, the tally climbed to more than $5 million, paid out by the public board that owns the Edward Jones Dome, on behalf of Gov. Jay Nixon's stadium task force.
10 Up and Coming QB/WR Combos |  NFL.com
See which surprise connections could emerge as heavyweight hookups in 2015. Here are 10 to watch this season, listed in alphabetical order by team...
2015 Profiles:  TJ McDonald |  NFL Spin Zone
"One of the most interesting players on the Rams’ elite defense is strong safety T.J. McDonald, who probably one of the best in-the-box safeties in the game."

Here are some pretty awesome [as usual] and telling statistics on defenses that brought the pressure in 2014 and what those plays yielded for the opposing teams.  Quite the drop when not pressuring, Gregg Williams.  I’m just sayin’...
Examining the 7 Players Eligible for the Supplemental Draft |  CBS Sports
The NFL announced today the names of seven players granted special eligibility for this summer's Supplemental Draft, scheduled for next Thursday, July 9.
These pics are old, going on a month, but I bumped into them and thought they might be good a conversation piece.  From Pro Football Focus, this was their updated rosters [with grades] from June 4, 2015.  Thoughts?

Greg Robinson was a rookie in 2014 and was thrust into the starting left tackle spot after Jake Long went down.  He’s the only player on the team to receive a "poor" grade.  And as awesome as Aaron Donald was as a rookie, I’m not sure the majority of folks are grouping him in with the "elite" defensive tackles in the NFL...yet.  But many [certainly I] regard Robert Quinn as one of the league’s most dominant 4-3 DE’s, yet only a "high quality" grade from PFF...and this for a guy who’s been to the past two Pro Bowls.

To each their own.  What do you think? Have a great Friday, and holiday weekend, Rams’ fam! ‘Merica 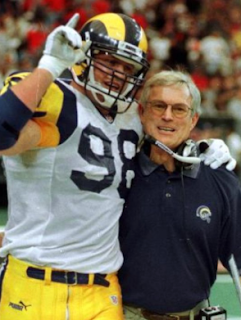