The St. Louis Rams haven’t had a winning season in, well, longer than most fans care to remember.  But true fans remain optimistic.  The faithful believe in their team despite the records of year’s past.

In this win/loss prediction series, which was broken down by quarters of the 2015 season, your votes have:

*  Gotten the Rams off to a 2-2 start, despite the steep competition against the Seattle Seahawks, [at] Washington Redskins, Pittsburgh Steelers, and [at] Arizona Cardinals.

*  Won three out of four in the second quarter of the 2015 season against [at] Green Bay Packers, Cleveland Browns, San Francisco 49ers, and [at] Minnesota Vikings.

*  And moved the Rams to 7-5 heading into the final stretch, having bested two of their four opponents in Q3:  Chicago Bears, [at] Baltimore Ravens, [at] Cincinnati Bengals, Arizona Cardinals. 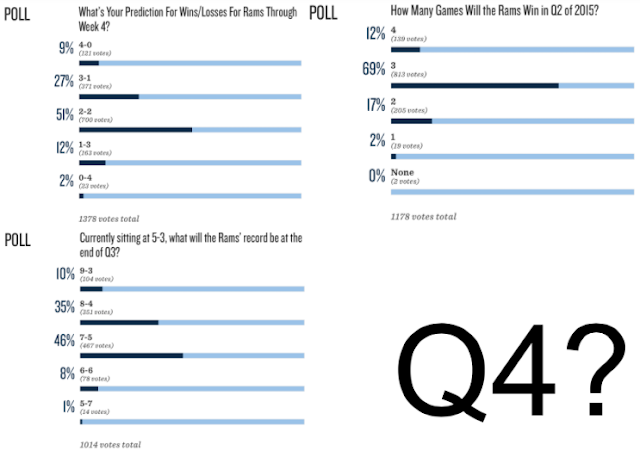 No matter the level of optimism, Rams’ fans have spoken, and it appears they’re buying a rebounding team in 2015.  The kind of team where rubber meets the road.  Where potential turns to production.

As [beating a dead horse-ly] aforementioned, the Rams haven’t put together a .500 season in a very long time.  But your collective prognostications have them not only knocking on the door of an 8-8 season, but potentially tapping into double digits in the win column.

Here are the final four opponents of the Rams’ 2015 season.  How do you see them faring?

The Lions, like several of the Rams’ 2015 opponents, finished last season with 10+ wins...and a playoff berth.  You already know about the offense, lead by Matthew Stafford and Calvin Johnson.  Joique Bell became a well-known name last season, and will be their feature back moving forward. He ran for 860 yards in just six starts.  The Lions also employ Golden Tate, a former Seahawk, who’s been known to do serious damage to the Rams’ secondary [wave bye bye].

Defensively, they’ve got some nice, albeit, young pieces in place.  Ziggy Ansah, Darius Slay, and Kyle Van Noy - all starters on the Lions’ 2015 defense - were drafted in the top 40 picks over the past three seasons.  They’ve also acquired a few former veteran Baltimore Ravens...Haloti Ngata and James Ihedigbo.

What they DO NOT have is one of the most dominant defensive tackles in the game, Ndamukong Suh.  He’s in Miami paying no income taxes.  They also don’t have Nick Fairley.  He’ll be in St. Louis in Week 14 looking to put a hurtin’ on Matt Stafford.

The Rams are playing the Buccaneers in 2015 because they did the same thing the Rams did...finish last in their division.  They needed quarterback help in the worst way, and they did right by drafting Marcus Mariota Jameis Winston.  That’ll be one to watch.  The Rams’ defense may have gotten off to a slow start in 2014, and they may get off to one in 2015, but you best believe they’ll be mowing down QB’s in Week 15.

They also have stud WR’s in Vincent Jackson [who’s sorta like Brian Quick, but not really] and Mike Evans.  G’nite Mike Evans...