Do the St. Louis Rams Have the Worst Wide Receiver Corps In the NFC West?

We’re smack dab in the middle of the NFL offseason...and that’s the perfect time to determine who’s better at what in football.

Share All sharing options for: Do the St. Louis Rams Have the Worst Wide Receiver Corps In the NFC West?

The past is in the past.  But the future, well that’s in the future.  And there’s no better way to determine the future by voting...on the internet.

And so that’s what our good friends over at Revenge of the Birds, SB Nation’s home for the Arizona Cardinals, have been doing.  Specifically, for this read, we’ll discuss the wide receivers...a bunch that’s not particularly holding their own on a neighboring NFC West site.
As of 1:30am ET on July 15... 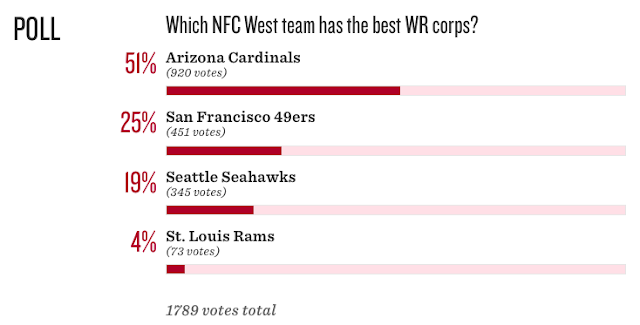 That’s a lot of votes.  But it’s not a lot of votes for the Rams.  And here’s how they were listed, not ranked, on ROTB's site...

On Tuesday evening, on SiriusXM NFL, Jim Miller and Pat Kirwan weighed in on the matter.  After both agreed that the Cardinals narrowly bested the Seahawks for the top spot, there was a toss up about who owned that third position...

Miller leads off, and while stating "this is tough" is interrupted by Kirwan who adamantly says he’ll go first.  Miller confesses he’ll go with the Rams, and before he can finish his sentence, Kirwan lets him know he’s going with the 49ers...

The addition of Torrey Smith, vertical threat. A better vertical threat than Crabtree was.  Boldin's still an amazing athlete....tough guy.  Putting Reggie Bush on the team helps.  Yeah, Vernon Davis disappeared last year. I’m expecting him to return to some form this year, along with Vance McDonald.  And when I look at the other group in St. Louis...you’re asking me to compare to Tavon Austin...not a big fan.  Stedman Bailey...just ok.  I like the tight ends.  They’re ok.  Kenny Britt, we keep talking that he’s someday going to play to his talent...I’ll take a better bet...number three the 49ers.  Number four, the Rams.

Are the Revenge of the Birds poll responses a true reflection of the caliber of player at the wide receiver position?  Did Kirwan get it right?  Did Jim Miller?

Where do you, honest fan, rank the Rams’ WR corps heading into 2015?