Look, I get it. The future is unknowable. The whole Jeff Goldblum drop of water on the back of the hand thing in Jurassic Park. But the future isn't the present. The assumption that things will look much like they do today assumes that there is no future. It assumes stasis. And the NFL doesn't do stasis.

That was at the forefront of the annual three-year outlook power rankings from ESPN's trio of John Clayton, Louis Riddick and Mike Sando (ESPN insider sub required because boo). 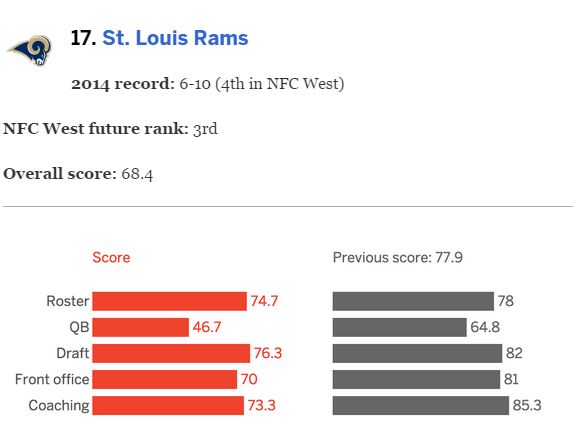 The overview: The Rams slipped five spots overall mainly because of their decline in the front-office (eighth to 13th) and coaching categories (10th to 17th). The team made no significant changes in either area (switching from Brian Schottenheimer to Frank Cignetti at offensive coordinator would not seem to account for a full reassessment of the coaching situation). This team would seem to have many of the right pieces in place, but the lack of enthusiasm could simply reflect frustration with a lack of progress in the standings. The Rams have gone from 7-8-1 to 7-9 to 6-10 in three seasons under the current leadership, and it is unclear whether they have a long-term quarterback on the roster. --Mike Sando

The dilemma: The Rams have again pushed the reset button at quarterback. It was just a year ago that I said Sam Bradford would hold the key to the Rams' future. Now it is the combination of QB Nick Foles and Cignetti, a first-time NFL offensive coordinator who will get a crack at trying to get the Rams over the top in the NFC West. This is a team that has had every resource imaginable at their disposal from a player personnel acquisition standpoint since 2012, and their results on the field have been average at best and mediocre at worst. The defense looks spectacular on paper, with a defensive line that could be the best in the NFL for years to come, but if this organization does not get it right at QB, does it really matter? --Louis Riddick

The youth movement: The Rams have assembled the most interesting youth study in the game. With the picks acquired from the Robert Griffin III trade, St. Louis drafted Michael Brockers, Alec Ogletree, Greg Robinson, Janoris Jenkins, Stedman Bailey and Isaiah Pead. That's quite a haul. They also snagged Tavon Austin, Aaron Donald and Todd Gurley with their own first-round picks -- and picked up safety Mark Barron, the seventh overall pick in 2012, in a cheap trade. That's seven No. 1s on the Rams' roster from the past four drafts. No team in football comes close to that. --John Clayton

It's a pretty confusing rankings, but Sando's explanation makes sense. Certainly recalibrating the scores for the front office and coaching have to come down for the 2012-2014 run. What's confusing is the dichotomy between Riddick and Clayton.

On one hand, Riddick is saying all that matters is the QB. Clayton is pointing out everything the Rams have put in place besides the QB. Of course, the Rams wouldn't be in this position if (a) the Rams hadn't been able to trade out from the #2 pick in 2012 for a QB or (b) their previous QB had stayed healthy and played well enough for them not to be in the position for that pick which (c) wouldn't have even left that question for Riddick to pose.

And it's a fair question to ask, it's just that...well, here's Riddick a year ago:

For this team, it is all about the QB. I don't want to hear that "they haven't given Sam Bradford the weapons he needs." They have invested enough, in terms of draft picks and free agents on the offensive side of the ball, that they "should" be able to protect the QB, throw the ball down the field and run the ball effectively. Defensively, they have four first-round draft picks on the line and tremendous depth behind the starting group. They are fast at LB and talented (but still inconsistent) in the secondary, but this team can only go as far as Bradford takes it -- unless the Rams move on to a new solution in the next three years.

It's worth pointing out the big risers and fallers, because it's gonna happen.

The first big surprise is the Cowboys. A year ago, they came in at 28; this year they're 6th. That seems a bit drastic. Following Dallas at 7 is the Vikings, jumping up from 26 a year ago. Both seem awfully knee-jerky. More comfortable is the rise of the Carolina Panthers who went from 19th to 10th in a year after besting the Cardinals in the wild card round of the 2014 NFL Playoffs and re-stocking the WR corps for QB Cam Newton. And while Denver and Indianapolis are well below where they sit in the conventional real-time power rankings, too much of this list feels too easy.

25 of the 32 teams are within four spots of their ranking in ESPN's own power rankings. That comes off less of a projection and more of the same. The bottom six teams in the future projections are the bottom six teams in the conventional rankings. That portends some pretty poor results from 2015 NFL Draft leadoffs Jameis Winston and Marcus Mariota.

A year ago, Tampa Bay's three-year ranking was at 17. After a disastrous season, the regular post-draft power rankings had them at 31. But even taking Winston wasn't enough to keep their future power rankings from tanking all the way down to 28.

So it is for the Rams. They're in constant show-me mode. Stacking up the most impressive non-QB youth in the NFL? Assuming either Jeff Fisher gets them over the hump or the Rams begin seeking new employees on the coaching staff? Nothing can get them out of the perpetual motion of 6-8 wins under Jeff Fisher and rankings right down the middle. But perpetual motion only exists in isolated systems...which don't exist.

The chaos inherent to NFL possibilities is beyond comfort. Expect bigger swings. Hope the Rams come out on a the better side of one.