St. Louis Rams 2015: The Most Important Game On The Schedule

When a season consists of 16 games, every one matters. But which one is most important for the St. Louis Rams?

Share All sharing options for: St. Louis Rams 2015: The Most Important Game On The Schedule

Over at Fox Sports, they’ve highlighted the most important games of 2015 for each NFL team.  There are plenty of factors that come into play when trying to identify a team’s "most important" game.

Could it be a team that needs to get off to a fast start, and a Week 1 win equates to much needed momentum?  Could it simply be a victory against a bitter rival that sparks the fire that helps a team to string together a few wins?  Or maybe it’s the season finale, when a team is desperate for one final win that could push them into the postseason.

They’ve pegged the Rams’ home opener [vs. the Seahawks] as the team’s most important matchup of 2015. 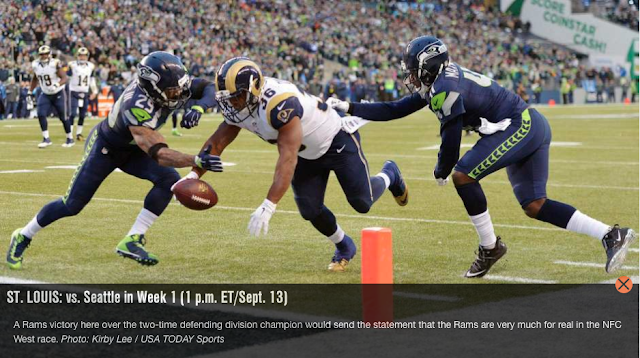 "A Rams victory here over the two-time defending division champion would send the statement that the Rams are very much for real in the NFC West race" reads the caption.

It goes without saying that every game against the Seahawks is a vital one.  But depending on your level of disdain for a particular divisional foe, it’s [typically] a game against the Hawks or 49ers that a Rams’ fan most looks forward to celebrating a win.  So Fox got it right there.

Wins against the Seahawks - who’ve been to the playoffs for three straight years, and the Super Bowl in two of them - never come easy.  Seattle has won 7 out of the last 10, but the Rams have faired "better" in most recent years.  Better = splitting the series in two of the past three seasons.  And barring the "Great Corner Fade From Clemens-to-Quick in 2013" the series may very well be tied over the past three years.

And about those home openers.  I’d be hard-pressed to say that any team’s home opener is a "must win," or the most important of their season, but that opinion is my own.  Losing a home opener sets a tone.  Losing to a bitter rival certainly doesn’t lessen the blow.

So, have a look at the Rams’ 2015 schedule.  Did Fox Sports get the most important matchup right?