It’s news about an American football team brought to you from a rooftop in Italy. So pretty much the same news.

Buongiorno! I’m sure the St. Louis Rams’ fanbase, despite recent struggles, is spread all over the globe. And while many of my Random Ramsdom’s are written from my home in the Washington D.C. area, I’m clicking away on the ‘ol keyboard this morning in Italy. Cinque Terre, to be exact.

I won’t bore you with the entirety of my vacation, which started this past Saturday, but for those that care, I’ll share a little bit about my trip thus far. Otherwise, feel free to skip to the Rams’ goodies, which are all linked up below.

For starters, Cinque Terre is five small towns/villages along the Italian Rivera, north of the Amalfi Coast, which more folks seem to be familiar with. Same coast, different region. The five villages are shown in the graphic [below]. The Mrs. and I are staying in Riomaggiore; the southern most destination. 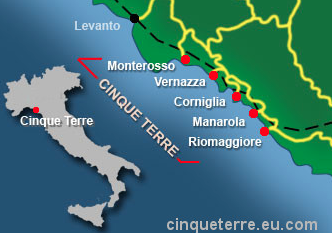 For starters, this particular region of the world doesn’t suit the fancy of many who are looking to live a life of luxury for a week or two. While it’s got it’s perks, it’s also very quaint -- five little villages tucked inside the rocky coastal hills of the Italian Riviera..all very different from one another. None of them are necessarily known for lavish lifestyles, king sized beds, or any of the amenities that either of the aforementioned would draw interest from a vacation-er who’s looking for the all-inclusive treatment. Many of my wife’s clients [fancier folks with fancier wallets, who’ve visited before] have told us that we’re doing this vacation all wrong -- not spending the majority of our time in major cities like Rome and Venice [which we’ve chosen to only visit for a day].

But that’s not how I roll. To be honest, living in a very fast paced, constantly on-the-go part of the world, I enjoy vacations where I’m more likely to run into a bear than a human. As does my better half. We like to actually get away on our getaways. We also love hiking. And that’s why we’re in Cinque Terre.

Here’s a pic I took [minus the Nike shorts] from the rooftop of our unit in Riomaggiore. Houses on houses on shops, restaurants, fresh fruit and veggie vendors, and gelaterias aaaaaall the way up the one mile long strip. 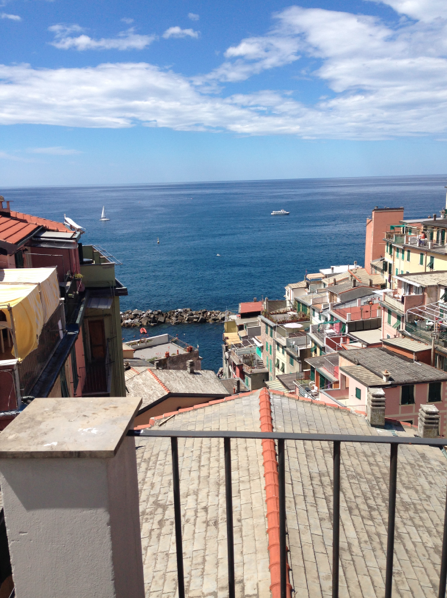 So hiking Cinque Terre...as you can see the towns are built into the coastline. Only one, Corniglia, is constructed on a cliff, but it’s still very much oceanside. The four remaining villages all have water/"beach" [term used very loosely] access. It’s all steps though...the whole place. Everything in Riomaggiorre...everything in Cinque Terre. All steps. Come with your quads/knees/feet prepped. Up steps, down steps...after a while it doesn’t matter. But it’s a beautiful place. Friendly people, great food, beautiful views, and cool ocean breezes. This place has it all...if that’s what you’re looking for, of course.

The main draw, for myself and the Mrs., was our ability to hike such a beautiful stretch of Earth. There’s a "blue trail" which stretches 7.5 miles between Riomaggiore and Monterosso [the northern most, and most tourist-y village]. We had a little fun with it, as there’s a 14th century church at the top of Rio that we wanted to visit...err...look at. We turned that hike into a one-day, 19 mile trek which took us about 8 hours. All in all it was an 11 hour day, but I probably haven’t mentioned that wine is bountiful in this region of the world, and requires one to stop frequently to re-hyrdrate... 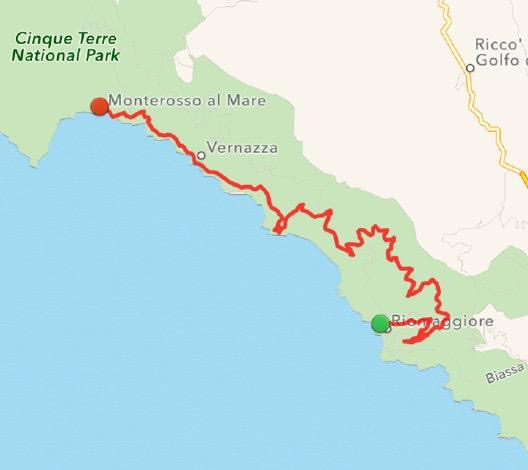 And wine's not the only thing -- by the way some wine is cheaper than a bottle of water here [ayo!]. Cinque Terre is known for many things: focaccia, pesto, gelato, calamari, anchovies, olives, and...well, I’m probably leaving a bunch out. But those are the basic "must try" things I was told weren’t optional. And I’ve not been disappointed. Pizza is everywhere, fellow Americans! 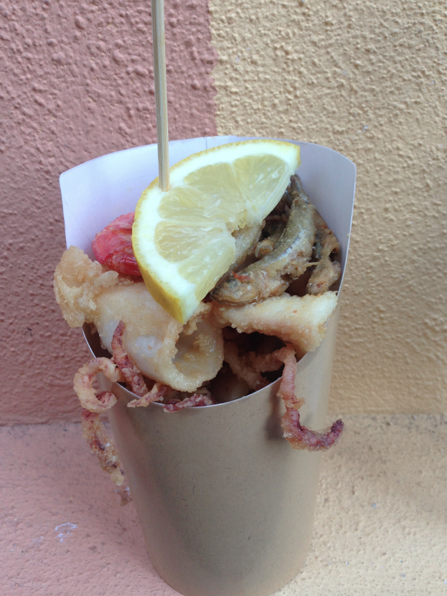 I have not, however, tried the ciken nughets.  I can only imagine they’re delicious. 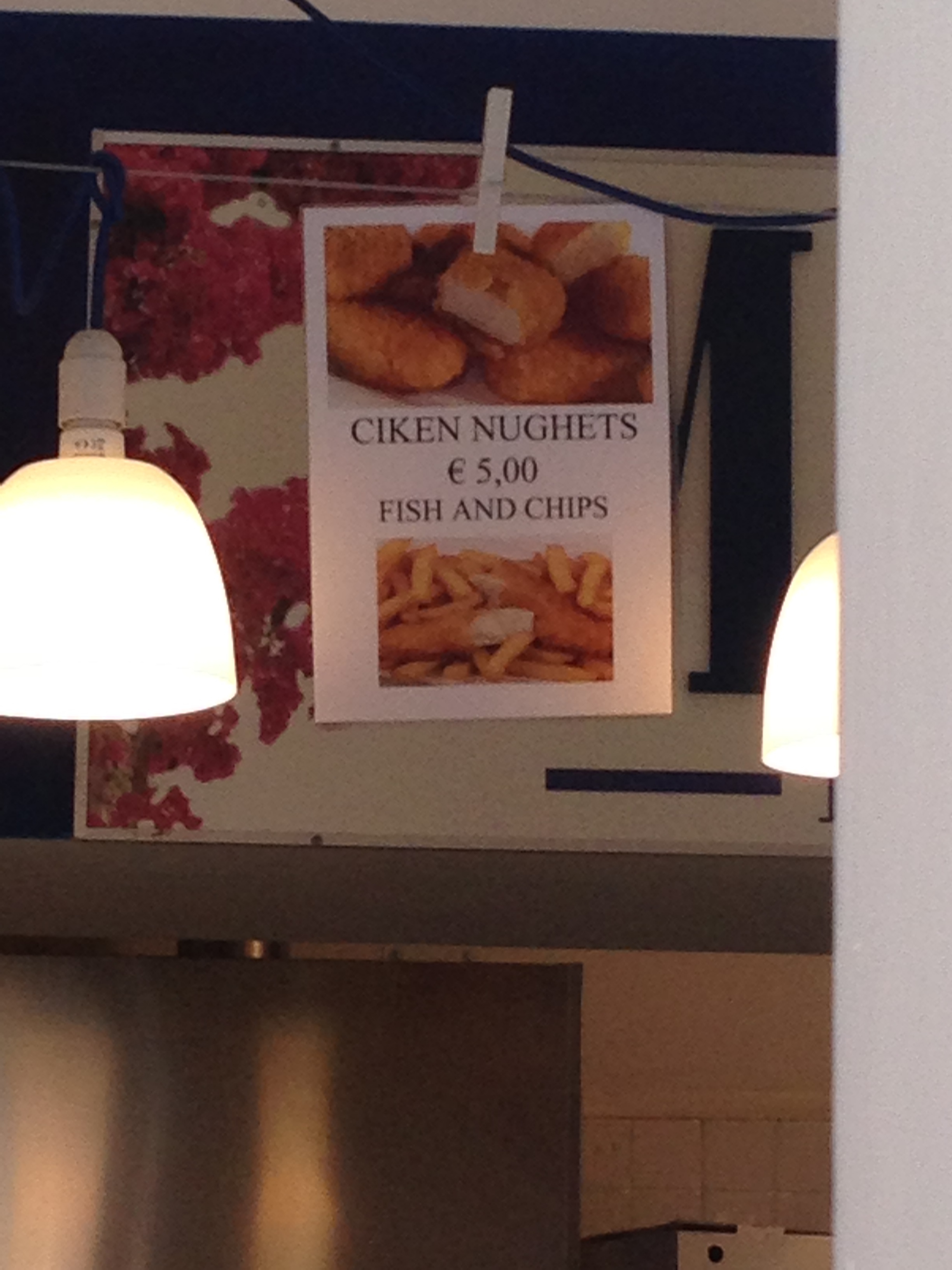 And for the romantic Rams’ fans out there, the views [as aforementioned] are pretty stellar.  I’ve got a slew of pics and quite honestly haven’t had time to rifle through them all.  Here are a few I snagged with the iPhone though.  Thanks for allowing me to share...and ramble. 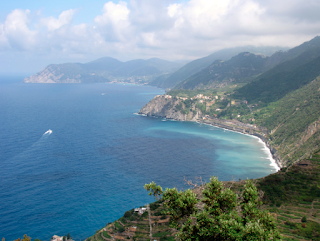 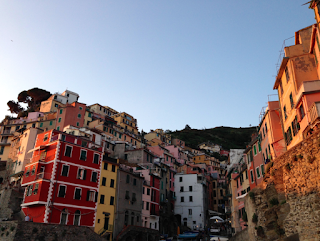 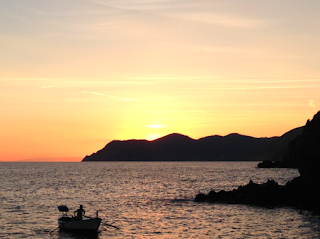 Cignetti Remodling Rams’ Offense With QB He Loves |  Fox Sports
For those curious about how different the Rams' offense will look this season under new offensive coordinator Frank Cignetti, he has an analogy for you.
Fast Start, Consistency Key For Rams’ Defense In 2015 |  ESPN
Heading toward the 2015 season, the St. Louis Rams defense is in the enviable position of retaining the scheme, the coaches and almost all of the players from last year. That's a good thing for a group that brings with it the type of lofty expectations of a unit some believe will be enough to break the team's decade-long streak of postseason absences.
Why Should the Rams Extend Foles |  NFL Spin Zone
Nick Foles hasn’t played a meaningful snap for the St. Louis Rams.  Is it weird to think we’re already talking extension?
Is a Long Term Extension For Foles a Bad Idea? |  Number Fire
Maybe it’s because it’s June and there’s not much real NFL news, or maybe it’s because the St. Louis Rams are actually interested, but rumors have emerged about a possible contract extension for Nick Foles.
Understanding Both Sides of the Rams/Foles Extension Talks |  ESPN
When St. Louis Rams coach Jeff Fisher confirmed Tuesday that the team is already interested in signing quarterback Nick Foles to a long-term contract despite him having never played a snap in a game for the Rams, the reactions were seemingly split down the middle.
The All-NFC West Team |  NFL.com
When it comes to highlighting top NFL talent, league-wide evaluations are the norm -- meaning some of the better players in each division are often overlooked. With his divisional all-star series, Dave Dameshek will be taking a deeper dive into the NFL's elite, putting together the best squad possible from each division -- continuing with the All-NFC West Team.
Gaines Ready to Follow Up on Stellar Rookie Season |  St. Louis Post-Dispatch
One of the steals of the 2014 NFL draft, Rams’ defensive back E.J. Gaines is already excited about the start of his second season.
Five Takeaways From Day Eight of OTA’s |  St. Louis Rams’ Official Site
Aside from announcing the schedule for the Rams’ Bud Light Training Camp presented by Dr Pepper, St. Louis had head coach Jeff Fisher, offensive coordinator Frank Cignetti, and quarterback Nick Foles address the media on Tuesday afternoon. Here are five takeaways from the Rams’ eighth OTA practice.
NFL Head Coach Rankings | Sporting News
The defense is legit.  He’s got a new QB leading the offense in 2015.  The 49ers appear to be sliding down the ranks in the NFC West.  But can Jeff Fisher put it all together this year?  And where have his subpar seasons in St. Louis landed him in this head coach rankings?
Chargers Latest Move Could Impact Rams/Los Angeles |  ESPN
The San Diego Chargers made it abundantly clear Tuesday that the plan put forth by the city of San Diego to have a public vote before the end of the year to help fund a new football stadium simply isn't going to work.
Mason Goes Full Madden Mode on the Broncos |  Cover 32 Rams
Tre Mason uses just about every Madden move possible on the Broncos’ defense.  Check out this quick replay of a Madden-esque moment from Mason in 2014.
Rams’ Top 5 Guards and Centers of All Time |  The Horn
The Rams have struggled to find a viable, consistently healthy option at center over the past two decades.  Since arriving in St. Louis in 1995, they’re bound to have had a few solid ones though.  Patrick, over at The Horn, ranks the Top 5...
Rams’ Top 5 Wide Receivers of the Last Decade |  Ramblin’ Fan
Let’s have a gander at the Rams’ best wideouts over the past decade...starting with Brandon Gibson.
Rams Leave Lasting Impact With New Field |  St. Louis Rams’ Official Site
To some, a football field is merely a 120 x 53.3- yard plot of grass. But to those who play the sport, it’s much more. It’s where kids grow up, learn valuable lessons and make lifelong friends. It’s a place the outside world can’t touch and kids can leave their worries behind and just be kids. For the Boys and Girls Club of Greater St. Louis – Herbert Hoover location, it’s a dream come true.
Five Worst Draft Classes of the Last Decade |  NFL.com
The Rams didn’t make it into the Top 5 here, believe it or not. But they did get an honorable mention for one particular draft class..
Ranking the NFL’s Backfields from 1-32 |  NFL.com
Even though runners are paid like kickers and punters in today's game, good luck enduring the long season without a capable cast of backs. It's no surprise that 10 of the 12 weakest rushing teams from one year ago watched the playoffs on the couch.
Rams to Practice in Cali in Training Camp |  Cover 32 Rams
The Rams will hold three practices in Oxnard, Calif., during their training camp coming up this August. Sound the alarm!
Power Ranking NFL Offensive Lines |  Bleacher Report
Dead. Last.
*****
Buona giornata, amici!