ESPN’s Mel Kiper Jr. and Todd McShay took turns alternating picks for the first three rounds of the 2015 NFL Draft. Who are the St. Louis Rams grabbing with their first three?

With nearly 100 picks in the first three rounds of the 2015 NFL Draft, it’s anyone’s guess as to which player a team will pick while on the clock.  And yesterday it was ESPN draft analysts Mel Kiper Jr. and Todd McShay’s turn.  Alternating picks for each team, Kiper and McShay gave us their latest mock draft [In$ider], which went a full three rounds.

How did they do for the St. Louis Rams?

Todd kills me for "breaking a Mel Kiper rule" and putting a running back in Round 1 of my Grade A, then he drafts Gurley at No. 9!? Who's the hypocrite? Anyway, Parker is a perfect fit at a need position. Easy call. Length, catch radius, explosiveness.

I was tempted to pull a Kiper here and trade back, but instead I'll reach a little bit and get the Rams the physical guard they're looking for in Tomlinson.

The Rams got a steal with E.J. Gaines in last year's draft, and I'm getting them another Gaines today. They need another CB.

******
Earlier this week, Kiper Jr. listed the top four needs for each NFL team.  Here’s his take on the Rams’ needs. 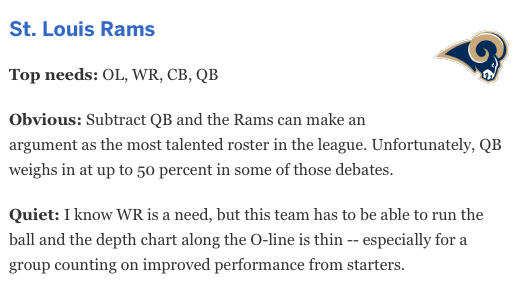 If Kiper’s list of needs are accurate, and despite order, many are probably in agreement they are, then ESPN’s draft duo have done a pretty solid job fulfilling the team’s most dire needs; leaving QB as the only position not drafted in the first three rounds.

For those wondering, and without In$ider, Jameis Winston and Marcus Mariota were clearly gone before the Rams picked at 10.  Several others were taken inside the Top 100 though, as well: