There’s a very strong possibility we could know the NFL’s regular season schedule as early as next week.

Share All sharing options for: St. Louis Rams’ Regular Season Schedule Should Be Released Next Week

On April 9th, we were informed of the St. Louis Rams preseason schedule.  They’ll be playing [at] Oakland Raiders, and [at] Tennessee Titans, before coming home to host the Indianapolis Colts and Kansas City Chiefs.

And we might have the NFL’s full slate of regular season games as early as next week.  Mike Florio, over at Pro Football Talk, says a source with knowledge of the situation thinks it’ll be released in the middle of next week.

The current thinking, per a source with knowledge of the situation, is that the sheet will be removed from the schedule on Tuesday, April 21, Wednesday, April 22, or Thursday, April 23.

Florio notes that ESPN currently has a MLB game scheduled for Wednesday evening, making that the unlikely choice.  It could be as early as next Tuesday, or as late as next Thursday, but it looks as though you’ll be able to start planning Sundays for this fall within the next 10 days.

We already know the opponents, so now it’s just a matter of "when"... 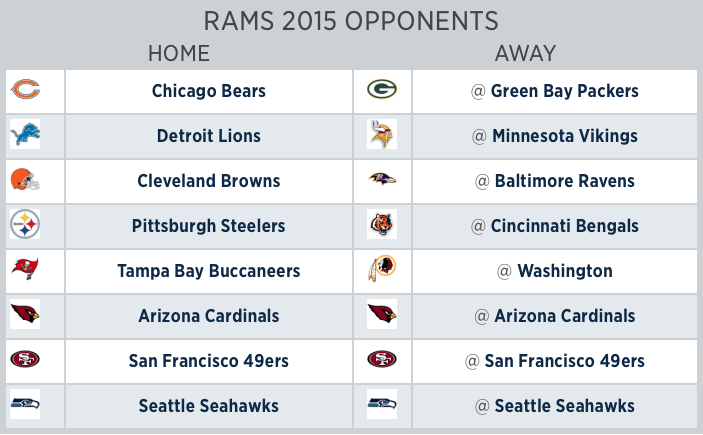