The guys over at Pro Football Focus went through the Rams depth chart and it's not very pretty.

Pro Football Focus is going through every team's current depth chart and grading every player in one of six categories: elite, very good, good, average, below average and poor. They dropped their review of the Rams' depth chart today, and it's certainly not inspiring: 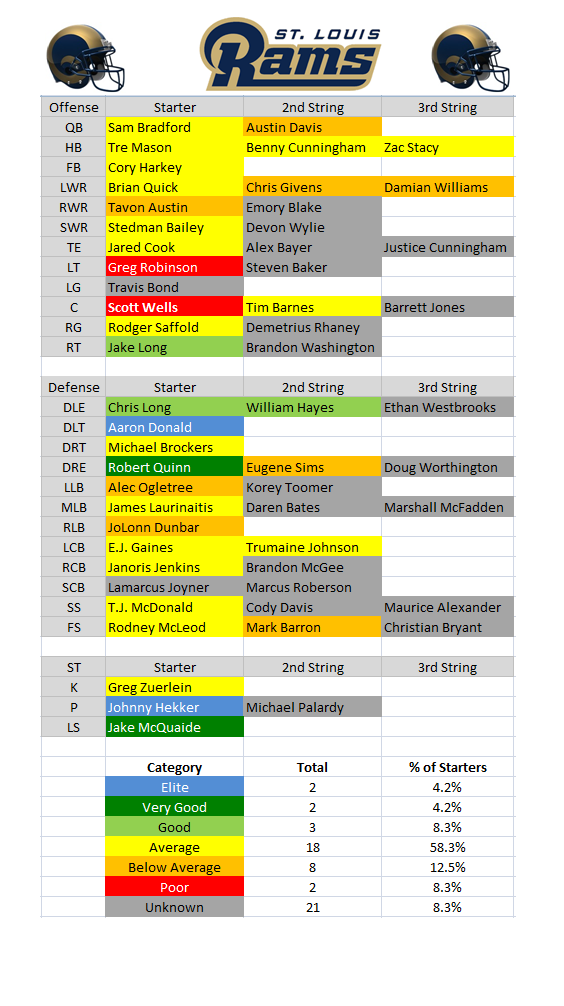 There are fair arguments to make on the individual categorizations of some players, but what should worry Rams fans is the sheer total number of players who are average or worse despite a HUGE haul over the last three years through the draft. The Rams amassed the majority of this roster through the draft, largely on the backs of the 28 picks they've used since 2012.

They won't have anywhere near that many moving forward.

That's an average of more than nine picks per draft, and the Rams currently hold just five selections in the 2015 NFL Draft. To only have seven players rated above average only one of whom was drafted by Snisher should be worrisome to every Rams fan. To have had that much draft capital and to have not come out of it with more than Aaron Donald above sea level is...disconcerting.

If there's a silver lining, it's that these ratings are based on past performance, not future projection. With such a young team (Wells is the only player 30 or older on the chart above), there's reason to think that their best football is in front of them and that these grades are more representative of a team growing into its skills rather than a fair assessment of those skills in and of themselves.

At some point though, the ship has sailed. When it has, it will look something like that PFF chart.