With no Tuesday Night Football game on this evening, let’s just talk about everything else going on in the NFL...

Free agency is set to begin a week from today, on Tuesday March 10th.  Exciting stuff, eh?  Getting some finality on the landing spots of some of the NFL’s big-named free agents will come as a breath of fresh air for yours truly.

So pretend you’re Les Snead.  Who in free agency are you targeting if you’re the Rams’ GM?  Who makes the immediate, and needed, impact this organization needs?

The St. Louis Rams have a few in-house decisions to make, as well.  The lone offseason move they’ve made in 2015 was releasing Kendall Langford.  Certainly not "cap strapped" but the Rams have some work to do if they intend on being active in free agency and, well, upgrading several positions from their current, maybe injured, starters.

The move to release Langford freed up $6mil.  That’s not chump change.  But guess what?  There are  a pair of players along the offensive line that could save them another $12mil.  Are you cutting, or keeping, Jake Long and Scott Wells?

Thanks to the Dolphins releasing Cortland Finnegan, the Rams’ll received an additional $3mil in cap credit.

And who are you keeping?

The headliner free agents for the Rams include right tackle Joseph Barksdale, tight end Lance Kendricks, and wide receiver Kenny Britt.  Do the Rams need to bring all three back?

All signs point to the Rams rolling with Sam Bradford as their starter in 2015.  Despite back-to-back season-ending knee injuries, the Rams don’t currently have a better option at signal caller.  Jeff Fisher has been vocal about adding some competition for Bradford from "outside the building."

Is that a rookie?  Is it a free agent?  Only time will tell.  If it’s a rookie, it looks like the Rams’ll have to use their 2nd or 3rd round picks to get their guy.  It appears unlikely Jameis Winston or Marcus Mariota are sliding down to 10, but stranger things have happened.

Speaking of the draft, who would you take in the first three rounds?  The Rams are without a 4th rounder, so the first three players selected should make the biggest impact.

Charlie Campbell, over at Walter Football, updated his 4-round mock draft on Monday.  Here’s what he put together for the Rams: 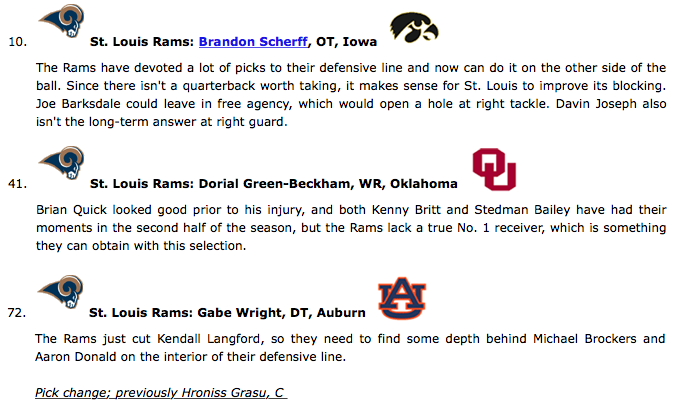 What do you think?  What would you change?  Need a little help?  FanSpeak has a fun little draft simulator that allows you to make picks for the team of your choice.  Pick the draft board you want to operate off, and get to mocking!  Let us know the results in the comments below.

How about piggybacking animals?  16 pictures of lazy hitchhikers.
I don’t watch professional wrestling, so I don’t know Seth Rollins.  I do know Jon Stewart, and I do know Jon Stewart is kicking Seth Rollins in the junk.
What I do watch, and will watch tonight at 8pm EST, is ABC’s "Fresh Off the Boat."  Haven’t seen it?  Peep the trailer.
And here’s a short clip of 95% of Rams’ fans if they take Brandon Scherff at 10...