No Brainer: Should the Rams Exercise Their Fifth Year Option on Michael Brockers?

St. Louis Rams’ defensive tackle Michael Brockers is entering his fourth season in the NFL. Will the team exercise their option for a fifth before May 3rd?

Share All sharing options for: No Brainer: Should the Rams Exercise Their Fifth Year Option on Michael Brockers?

In 2014, three years after the NFL announced it's 10-year collective bargaining agreement [CBA],  the St. Louis Rams exercised a fifth year option on their first round selection from the 2011 NFL Draft: defensive end Robert Quinn.  The move to lock in the league’s best 4-3 edge rusher at the age of 23 was a no-brainer.

This year, the Rams [along with every other NFL team] will have to make a decision on whether or not to exercise that option on their 2012 first round picks. That player, for the Rams, is defensive tackle Michael Brockers.

As an aside, the Rams owned the second overall pick in 2012, but the Redskins traded up [from the 6th spot] to grab Robert Griffin III.  You’ve probably heard of that trade.  The Rams wouldn’t stick at six either.  The Cowboys, enamored by cornerback Morris Claiborne, moved up to claim their guy.  Brockers, like Quinn, was ultimately selected in the 14th spot.

And that certainly impacts his payday come his fifth year in the NFL...

A quick refresher on how it works, from the 300+ page document:

The team must provide the player with written notice of their intent to extend for a fifth year at some point between the final regular season game [of the player’s third year] and May 3rd of the following league year...essentially prior to the onset of their fourth year in the league.

*****
As designated by the May 3rd deadline, this isn’t a move the Rams are being forced to make in haste.  And don’t expect them to.  They waited until late-April last year to extend Quinn.  And there’s little to suggest the Rams have any attention of contemplating doing otherwise with Brockers.  He was indeed the first selection made by the Jeff Fisher/Les Snead regime.
This move, much like their choice to extend Quinn for a fifth year, seems like a sure thing.  And you need look no further than their decision to release Kendall Langford for reassurance.  As it stands, according to the Rams’ official depth chart, the team now has only Aaron Donald, Brockers, and free agent Alex Carrington on the depth chart.
Could a position of strength suddenly be a point of concern?  Unlikely.  The Rams will most certainly address depth in the offseason, whether it be in free agency or the draft.
Brockers has only missed three games in his young NFL career due to injury and has played extremely well for the Rams since being drafted.  And while the fifth year option brings about a connotation of "playing for cheap," don’t fret.  When the Rams exercised the option on Quinn prior to last year,  NFL averages for the defensive end position would’ve had him playing for approximately $6.9mil in 2015.  Hard work doesn’t go unnoticed, and the Rams chose to extend him long-term [2019] last September.  The result [via Spotrac]: 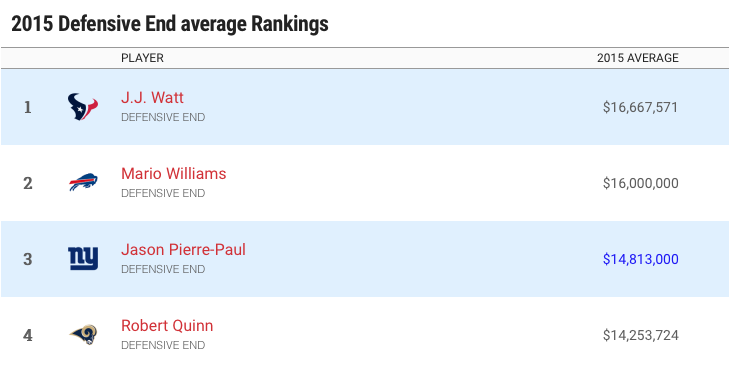 Good company.
The Rams have a not-so-difficult decision to make in the next 60 days.  Their guy is coming into his fourth year in the NFL, and it’s up to them as to whether or not he sticks around for a fifth.
Michael Brockers has given the Rams, and their fans, little reason to believe he won’t continue to excel at the defensive tackle position.  If he does, look forward to the Rams extending him well beyond the fifth year of his rookie deal.
Odds are the Rams made this decision well before this article was written.  Good for them.