Can the Rams surprise the Cardinals again this Sunday? The Turf Show Times’ staff have their predictions...

The NFC West leading Arizona Cardinals head east in Week 13 to take on the St. Louis Rams.  The Rams were able to knock off the Cards in Week 4.  Can they surprise them again this Sunday?  The Turf Show Times’ staff have their predictions...

Rams are a mess, Cardinals are on fire. Only reason this game might be close, is St. Louis tends to stay in all NFC West divisional games until the end. Key operating word in that sentence is "tends". If it turns into a blowout, I say can Fisher on Monday and see what the towel boy has to offer as a head coach.

I'm just punting this week, like Rams will be doing a lot on Sunday.

No reason to analyze a team that puts through the effort that this staff and players do. Arizona was in a similar spot as the Rams 4 years ago, they completely passed them with good coaching, good gm and players executing unlike the Rams. Cards are playiing for home field while Rams are again playing for a draft pick.

I don't think this turns out like the Week 4 match up. 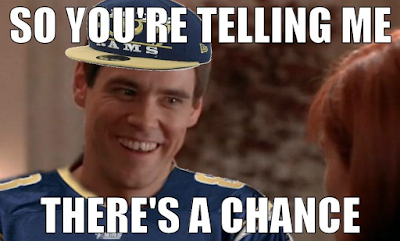 No. There's really not.

At this point of the season, it's near impossible to pick the Rams. They're quickly headed from having the best season they've had under Fisher to having the worst. This one is a loss, no doubt. Short analysis for a game that'll only keep our attention for a short amount of time.
Prediction: Cardinals win 34-14

The Rams shook the Cardinals a little bit in their first meeting, but Bruce Arians quickly righted the ship. Now he has a score to settle.
The question is whether he can keep Carson Palmer upright against the Rams' still-formidable pass rush. If so, this one is over quickly in front of what will be one of the smallest crowds of the season. If not, a fluky score could win this game for either team.
Prediction:  Cardinals win 30-7

The Rams have lost 4 straight, and the last one coming off an absolute disaster at the Bengals. The surprising part was how bad the defense looked particularly in the secondary.
The Rams will fight hard through the first half and give the Cardinals a hard time as usual, but I can see things falling apart after halftime.
The Rams defense has been exposed a bit and the Cardinals will take advantage of the Rams aggressiveness and have a lot of success against the blitz as usual.
Would it surprise anyone if the Rams somehow pulled this one off? That's the way it works for Fisher teams. Somehow the stars align and the football gods give him his .500 season.
Unfortunately there are still other games left for that to happen so the Cardinals avenge the loss of their first meeting by winning this quite easily.
Prediction:  Cardinals win 26-13

The Rams only hope in this one rests on the defenses ability to get consistent pressure on Carson Palmer. If Robert Quinn returns to the lineup and the front four is at full strength, they may have a chance to limit the Cardinals offense enough to keep this close. Of course the other side of the coin is the Rams will need their own offense to generate points no matter how well the defense plays. The Cardinals will score, probably at least 20 points even if the defense is firing on all cylinders. Can the offense keep pace? They really haven't shown the ability to score points on a regular basis all season, and with the mess at QB its hard to imagine it happening this week. Unless Tavon Austin and Todd Gurley BOTH go off in this game, combined with a very good defensive performance, the Cardinals will win this one easily en route to the NFC West title.
Prediction: Cardinals win 23-10

I'll be honest: I think that the Rams will have trouble keeping Carson Palmer, Bruce Arians and the Cardinals' offense out of the end zone. The Cardinals will rely on rookie David Johnson (7 TD's in a limited role) to take over in the backfield, but make no mistake this is an aerial offense commanded by one of the NFL's hottest QB's. It doesn't really matter who the RB is, honestly, they will figure out a way to move it and keep defenses guessing.

It's extremely important that Lamarcus Joyner have a good game in the slot, with how the Cardinals like to create mismatches inside the boundaries (especially with Fitz). It appears that Michael Floyd could return, and Jermaine Gresham is always a threat in the seams. Also, keep an eye on JJ Nelson, who has elite speed and is coming on.

These coaching staffs and players know each other very well by now, and although the Rams came away with a last minute win in the desert earlier this season (remember Gurley's coming out party?) it was before the Nick Foles implosion. Foles is slated to start again this Sunday, and based on his performance against the Bengals I am not sure the Rams will find the end zone without splash plays. The Cardinals' secondary is fast and aggressive, not a good combination for the Rams' passing "attack".

I would expect the game to be close for a while, since Fisher does in fact prepare for the division games and "built the roster to compete in our division", but ultimately the Cardinals will pull away as the Rams' defense is forced to play 70 snaps and the offense stalls out.
Prediction: Cardinals win 17-6

The Rams offense will score 7 points and the defense will create a turnover and the Rams will get three points out of that. Based on the recent success of the Rams. Their offense will not get off the ground and the Cardinals get their revenge on the Rams.
Prediction: Cardinals win 31-10

Nick Foles has a showcase to either prove, or disprove, his detractors right. I started out buying into what Foles could mean for the St. Louis Rams, but now I'm not so sure? Bottom line: NFC West games are at the very top of Jeff Fisher's concerns list. A win here would definitely buy Foles another long look in the coming off season. Then again, another "3 n' out-fest" will - without a doubt - be the end of Foles in St. Louis. Les Snead will hit the NFL draft or free agency for a quarterback (See: Drew Brees?).

The high concern for Arizona has to be coming out of these always brutal games without losing a key player. Carson Palmer will be wearing Kevlar underwear, and a chain-mail shirt. Bruce Arians will be screaming at his offensive linemen to protect Palmer too. To that end, the Rams missing Robert Quinn could be the key to this game. Quinn feasted on Cardinal QBs in the past, so - if he's out - look for defensive coordinator Gregg Williams to dial up bizarre blitz packages of the right side of the Rams' defense. Janoris Jenkins is both terrifying and fun to watch. With the "after-burner" wide receivers Arizona has, the likelihood Jenkins will guess wrong is high. I see Jenkins giving up a long TD pass once again, but he'll snag an INT too. Balance, right? Free agent dollars are riding on how Jenkins finishes this season, so he may want to cut back on whatever Quija board he's been using...

Look for Jeff Fisher to pull out all the stops in this one...

Bodies on top of bodies, IV's on top of IV's
Obviously the coroner between the sheets like the Isleys
When you hop on that trolley, make sure your colors correct
Make sure you're corporate, or they'll be calling your mother collect
They say the governor collect, all of our taxes except
When we in traffic and tragic happens, that shit ain't no threat
You moving backwards if you suggest that you sleep with a TEC
Go buy a chopper and have a doctor on speed dial, I guess
m.A.A.d city
Prediction: Cardinals win 27-0

The recipe for success for the Cardinals’ is stopping Todd Gurley and Tavon Austin.  You know it.  I know it.  Bruce Arians knows it.
They’ll do just that.  My guess is that you’ll probably miss the Rams’ garbage time touchdown because you’ve turned the channel already.
Prediction:  Cardinals win 30-13