Stedman Bailey was discharged from the hospital and all the other Rams news for Christmas Eve.

Share All sharing options for: Random Ramsdom 12/24: Stedman Bailey...Home For the Holidays

Thought I’d drop this in on ya during Seahawks’ week.  Good morning [and Merry Christmas Eve], Rams Nation! 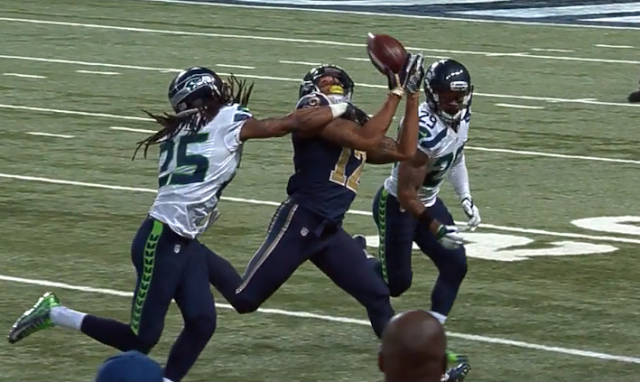 Nearly a month after he was shot in the head, St. Louis Rams wide receiver Stedman Bailey is home for the holidays.

The NFL announced players who had been elected to the Pro Bowl on Tuesday evening, with Rams defensive tackle Aaron Donald, running back Todd Gurley, and punter Johnny Hekker all making the list. For all three, the recognition has been well earned for outstanding seasons.

Benny Cunningham didn't quite make it to the end zone on his 102-yard kickoff return vs. Tampa Bay last Thursday. But he did make it as NFC special teams player of the week.

The Seattle Seahawks (9-5) will try to avenge a loss to the St. Louis Rams (6-8) in the season opener when they host them in an NFC West rematch Sunday. Seattle lost 34-31 at St. Louis in overtime as a 3.5-point road favorite in Week 1 as part of a disappointing 2-4 start. But the two-time defending NFC champion Seahawks have won seven of eight straight up since then and covered the spread in six of those games.

Alec Ogletree wants to play before the end of the season, but the Rams aren't going to push it.

When former second-round pick Montee Ball joined the Patriots' practice squad, he was No. 39.

It’s not meant to be a definitive statement...but Todd Gurley is numero uno on this list of rookie hopefuls.

According to Sam Farmer of the Los Angeles Times, the preliminary stages of construction have already begun at the site.

Russ Lande Explores Options for Rams at QB in 2016