Can the St. Louis Rams end a five game losing streak at home against the Detroit Lions this Sunday?

Things appear to be unraveling for the St. Louis Rams.  Games they should ideally win, they lose; and some in embarrassing fashion.  There are no more talks of a postseason, and folks are already turning to the 2016 NFL Draft.

Players are being lost to injury, and along with them, for some, hope.

Regardless, they’ll host the Detroit Lions this Sunday.  Can an ailing Rams team stop the losing skid and get their fifth win of the season?

The Turf Show Times staff have their predictions... 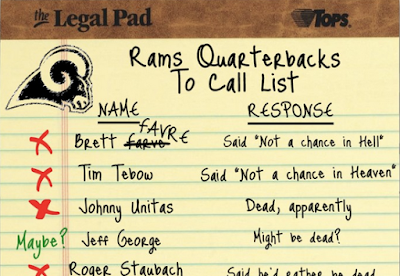 For the first time in many weeks, I'm predicting a win for the Rams. At this point, I think losses to move up and get the QB and provide more incentive to fire Fisher may be more beneficial, but I could see a win here.

The new offensive coordinator will institute some plays that the Lions won't be able to study for because this is his first week. We'll catch them off-guard just enough times to splash some big touchdowns, and we'll put up what is, for the Rams, a huge offensive game--24 points. It'll seem like firing Cignetti actually made a difference, and some people may even think that the team is "saved."

Next week, the scouting reports will be out, and the offense will be as stale as ever.

Somehow Gurley will burst for a big run and Case keenum will accidentally throw a touchdown. Obviously it's because Jeff Fisher will have to get his offense on track, or he night run out of bodies to throw under his bus.

The Lions offense will put up more points than Rams' offense can muster - wait, that's about 10 points.

Can the Rams offense resemble an NFL offense in week 14 under its new OC? Well, the new OC was beat out by the previous OC in an open competition for the job so I'm not going to hold my breath. The Rams defense is clearly getting worn down as the season wears on, as the time of possession disadvantage has gotten out of hand as the offense has slumped into the deep dark abyss. The Just Todd Gurley argument 3k made after draft day sure seems to be living itself out. Gurley is a truly special talent, but even he can't elevate this offense to mediocre all on his own. There was a brief moment in time when the Gurley/Austin combination was formidable, creating big plays and giving us all hope. That seems like a distant memory now, and the physical and psychological toll of the past 5 losses seems to have taken a hold of the entire team. This could be a close game, but if it is close it will be ugly for sure.

The Rams offensive woes are over. Frank Cignetti was directly the reason for the lack of production and third down issues. With the release of Cignetti, the Rams can now FINALLY play football the way they are supposed to under the Fisherball "perfect" system. Gurley WILL rush for 200+ yards and 2 TD's this week as Boras fills the void and discovers how to run the ball against the dreaded 8 man front. Case Keenum goes 12-12 on third down with a barrage of successful screens, slants and a few deep go routes just to keep the defense on their toes.. he will tally 2 TD's as well. The defense (who will spend less than 15 minutes on the field) will tally 4 sacks and 3 turnovers, one a pick 6. in a Rams rout.

Short and simple. The Rams won't win this one either. Why? The o-line. The quarterback. The receivers. Jeff fisher. Rob Boras.

Lions are not good but the Rams are historically awful and a 11 year tight ends coach will not fix this mess. The Lions have been #1 against the run the last 5 weeks which is the only decent thing the Rams may be able to do. Another bloodbath.

The Lions are bad but suddenly competitive in the last month. I don't necessarily trust bad teams to stay on good streaks, though, having seen the Rams choke on their own momentum too many times.

I think the Rams eke this one out in an ugly game, 12-9. (That's an Aaron Donald safety, a short field goal off a turnover, and a random touchdown catch by Cory Harkey, making his up-jumped position coach proud.

My memories of a corpse
Mind full of sick thoughts
And I ain't goin back to court
So fuck what you thought, I'm drinkin' Hennessey
Runnin' from my enemies will I live to be 23
There's so much pain

It’s gotten to the point that if I don’t think the Rams’ defense can absolutely dominate it’s opponent, I’m giving them little/no chance to win.  That said, my prediction for this Sunday’s game - along with the three that follow - is a Rams loss.