2015 St. Louis Rams: Revisiting The Burning Questions From The Preseason

Almost halfway through the 2015 NFL season, it’s about time we revisit some of the burning questions we had back in March...

Share All sharing options for: 2015 St. Louis Rams: Revisiting The Burning Questions From The Preseason

The NFL offseason is good for a lot of things.  It’s good to decompress from a miserable 16-game showing the season prior...it’s also good - for some - to reflect, celebrate, and gloat.  Some hibernate altogether.  It’s always handy for mock drafts.  It’s certainly good for prognosticating.  It’s a time, for some of us, to put the past behind us, take a drink from our half full glasses, and look forward to what the season ahead could bring.

We do that here at Turf Show Times.

Earlier this year, in March to be specific, I posed a few questions to the TST faithful in regards to their expectations for the 2015 season, and I thought it might be a good time to look back on a few of the questions posed.  More importantly, how did you respond, and how are things shaping up seven games in to the season?

Would You Trade Tavon Austin Straight Up For Nick Foles?

The Rams moving up in the 2013 NFL draft to select Tavon Austin has been one of the more controversial draft selections the Rams have made in recent memory.  He’s too small.  He’s too gimmicky.  The Rams [re: Schottenheimer] won’t know how to use him.

Those kind of numbers aren’t what many fans expect when you draft a receiver that high in the draft. They expect a game-changer.  They expect a "true number one" receiver, who’s a threat to score at any time.  And while Tavon showed flashes throughout his first two seasons [see: Colts game in 2013], 242 receiving yards simply wasn’t going to cut it.

On March 9th, with rumblings of Nick Foles potentially being traded to St. Louis, I posed the aforementioned question.  Your response...drumroll please!

Whew!  Close call.  Just about as close as you can get, really.  And looking back, I’m guessing a few folks may want to change their vote.  Tavon now leads the Rams in receiving yards [285], and touchdowns [7], which is tied for third in the entirety of the NFL...tied with guys like Rob Gronkowski, Julio Jones, and Odell Beckham Jr.

Luckily, the Rams found a way to get that one done without trading away their top receiver.

Dating back to 2008 - seven years prior to the kickoff of the 2015 season - the Rams had ended each year with a different leading receiver.  In 2014, that receiver just so happened to be Kenny Britt; who had 748 yards last year.

You’re probably painfully aware the Rams’ haven’t had their leading receiver eclipse 800 yards since 2007 when Torry Holt did it, so we’ll just not even mention it.

Fresh off a new 2-year, $14 million deal, I posed the question above.  Could Kenny Britt once again emerge as the team’s top receiver, breaking the never-ending streak of WR’s incapable of surpassing 800 yards in this offense.

#Yikes.  Britt has 224 reception yards on the year, which is third on the team behind Austin and tight end Jared Cook.  At his current pace, he’ll finish the year with 512 yards.

Demetrius Rhaney and Barrett Jones To Start...You Ok With That?

Folks could talk about the potential starting five offensive lineman for the entirety of each and every offseason, seemingly.  And while we were quite certain that Greg Robinson and Rodger Saffold would see their way into the starting lineup with relative ease, there was much debate about who would fill the other guard spot, center, and right tackle...assuming they didn’t draft a left tackle and move G-Rob back...which was one of a million potential scenarios.

ESPN’s Nick Wagoner hinted much of the offseason that Jeff Fisher expressed confidence in both Demetrius Rhaney and Barrett Jones, who had combined for zero career starts.

We know now that this didn’t pan out, but I posed the question in late March.  Your responses...

Good for you.  If you’re in the 27% that were interested in this pairing, identify yourselves!

The Rams drafted Todd Gurley out of Georgia with the 10th overall pick in the 2015 NFL draft.  You were shocked.  Tre Mason was shocked.  Zac Stacy, clearly shocked.

Mason lead the team in rushing last year, his rookie year, rushing for 765 yards in 12 games.  Even with the addition of Gurley, many would assume - and Fisher even hinted at it - the Rams would take a running back by committee approach that would feature both backs.

This question, obviously, was asked in May, after the draft had already occurred.  Could the St. Louis Rams feature a pair of 1,000 yard backs for just the 7th time in NFL history?  I asked it. 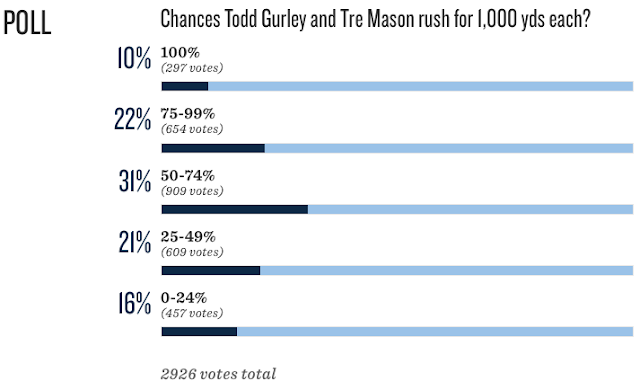 This one...well...this one was clearly overoptimistic, depending on which button you clicked.  If you selected "0-24%" consider yourself a winner here.  Tre Mason has played in only five games due to injury, and has only 95 rushing yards and a paltry 2.7 ypc to show for it.  Health issues aside, Mason won’t be seeing an increased workload anytime soon.

Todd Gurley is running through opponents with what looks to be relative ease, is setting NFL records, winning weekly awards, and has people wondering if he can break Eric Dickerson’s rookie record of 1,808 yards, despite missing [essentially] the first three games of the 2015 season.  A long shot, but at the pace he’s run over the past four weeks, Gurley would finish the season with 1,846 yards.

I’ll just assume, for those who clicked "100%" that you misread the question and you thought Todd Gurley would run for 2,000 yards, covering them both for this statistic. You may not be wrong.

******
So, assuming you were around, how’d you vote?  Were you way off on your prognostications?  And what do you think about any of the players turning things around for the remainder of the 2015 season?