The St. Louis Rams [4-3] will head out west to take on the Minnesota Vikings [5-2] in Week 9.  Including postseason play, this game will mark the 44th time these two teams have squared off, dating back to November, 1961.  The Vikings currently hold a 25-16-2 series lead.

The Vikings have won four out of the past five against the Rams, and have taken three straight; all of which were played in St. Louis.  The Vikings scored 38, 36, and 34 points, respectively, in those games.  The Rams scored 38 combined during that span.

For a full list of their matchups - including six postseason games - with box scores and statistics, visit Pro Football Database.

The Vikings came into the Edward Jones Dome and left with a 34-6 victory.  Vikings quarterback Matt Cassel threw for 170 yards and two touchdowns.  Cordarrelle Patterson rushed for 102 yards, one of which was a 67-yard touchdown run.

The Rams stole victory in Minnesota with a final score of 41-21.  Rams’ running back Steven Jackson rushed for 142 yards, with three touchdowns.  Cornerback Ron Bartell added a score with a 38-yard interception returned for a touchdown.

* Todd Gurley is the first rookie in NFL history with 4 consecutive games of 125+ rush yards. He's rushed for 566 yards [141.5 per game] in the last four, which is most in the Super Bowl era for a running back in their first four starts.  He leads the NFL with four rushes of 45+ yards, including a 71-yard TD last week. He’s scored three touchdowns in the last two games. 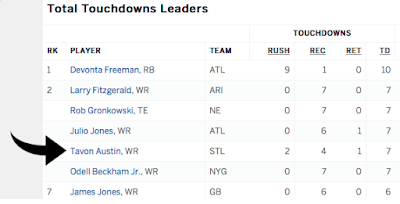 * Teddy Bridgewater has won six in row at home, boasting a 91.7 passer rating. He’s had a 100+ rating in three of those six games.

* Rookie wide reciever Stefon Diggs had six catches for 95 yards and a touchdown [40 yards] last week. He has 419 receiving yards [104.8 per game] and two TDs in his first four career games. He has 85+ reception yards in all four. He’s aiming for his third with a 35+ yard TD.

* Defensive end Everson Griffen has two sacks and an interception return for a touchdown in two meetings against the Rams. He has 14.5 sacks in his past 18 games. Safety Harrison Smith had an 81-yard INT-TD in their last meeting.