My Trip to the Game: A St. Louis Rams Fan Tasted Victory In The Edward Jones Dome

I made the trip from Reno to St. Louis for the game against the 49ers, all thanks to my dog.

Share All sharing options for: My Trip to the Game: A St. Louis Rams Fan Tasted Victory In The Edward Jones Dome

I have been to three St. Louis Rams games prior to the one last Sunday: in 2010 against the KC Chiefs in St. Louis, in 2011 at Seattle for Monday Night Football, and in 2013 at San Francisco in their last year at Candlestick Park. If you noticed, they were all losses and not even close ones.

Luck wasn't on my side.

This year, I submitted a photo of my dog, Sir Samwise Bradford (Sammy B), for the Pet of the Week contest the Rams were holding during the preseason. He won the first week, which got me two tickets to the game versus the 49ers. I was excited, but didn’t think I’d go especially since seats were in the upper level – not worth the airfare from Reno to St. Louis. I was going to send the tickets to my family in Missouri, so they wouldn't be wasted.

I kind of forgot about the contest until I got a message from the Rams on Twitter, saying Sammy B won the whole thing and would appear in a calendar with Rams players and their pets.

Sammy was the Rams' Pet of the Year.

Now I had to get to St. Louis. 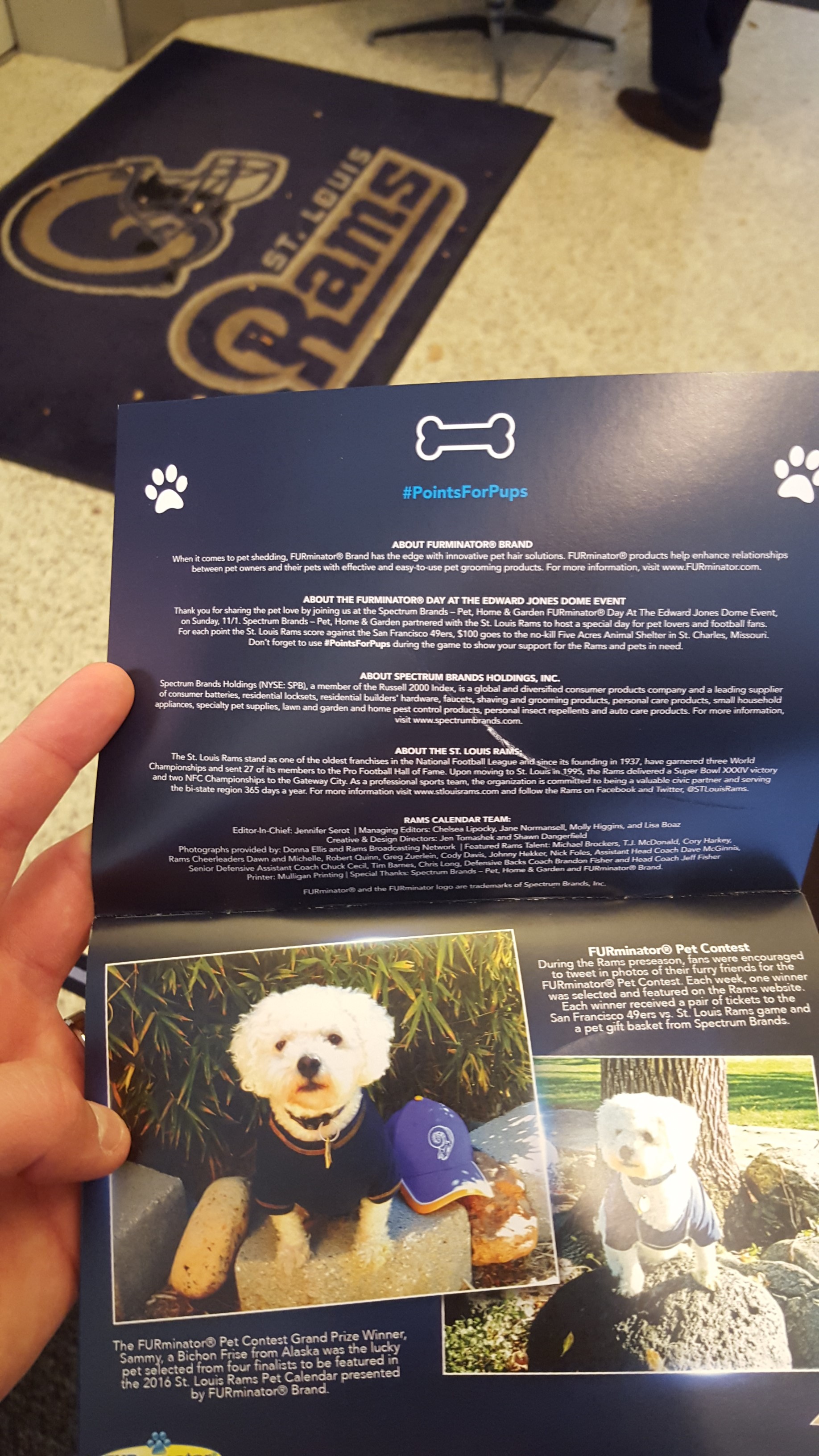 The day before flying out, I discovered that my wife and some of the Rams’ staff have been scheming and got us pre-game field passes along with amazing seats in the corner of the end zone about 20 rows up.

We showed up to the game two hours before kickoff to see the field, check out the players warming up, toss the ball on the sidelines, hang out with the cheerleaders, and become best friends with every player on the team.

Ok, that last one was a lie.

However, because I’m one of the only Rams fans that happens to be an Oregon State Beavers fan and yells "Go Beavs" to Johnny Hekker every time I get a chance, he now knows me by name. 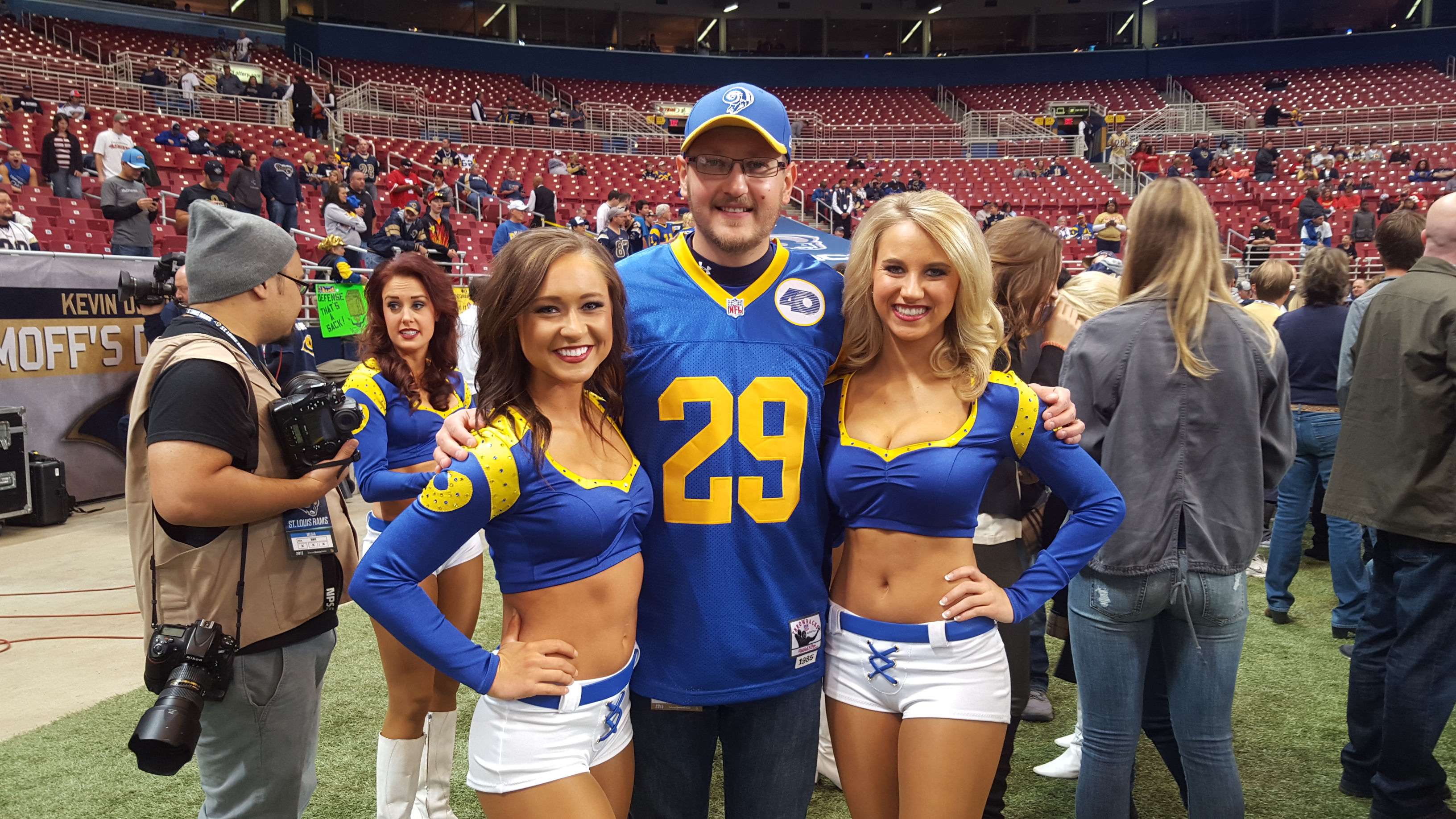 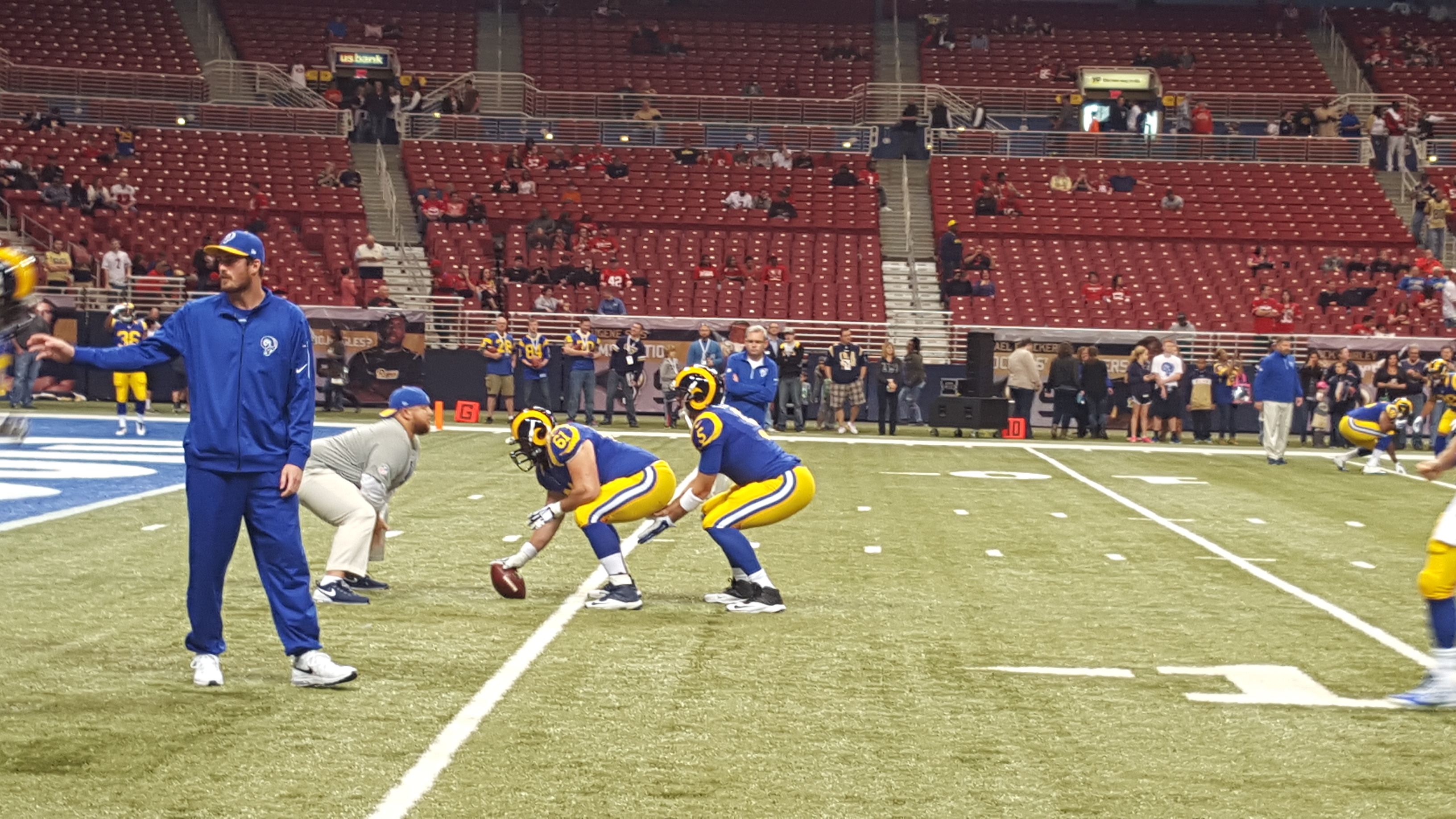 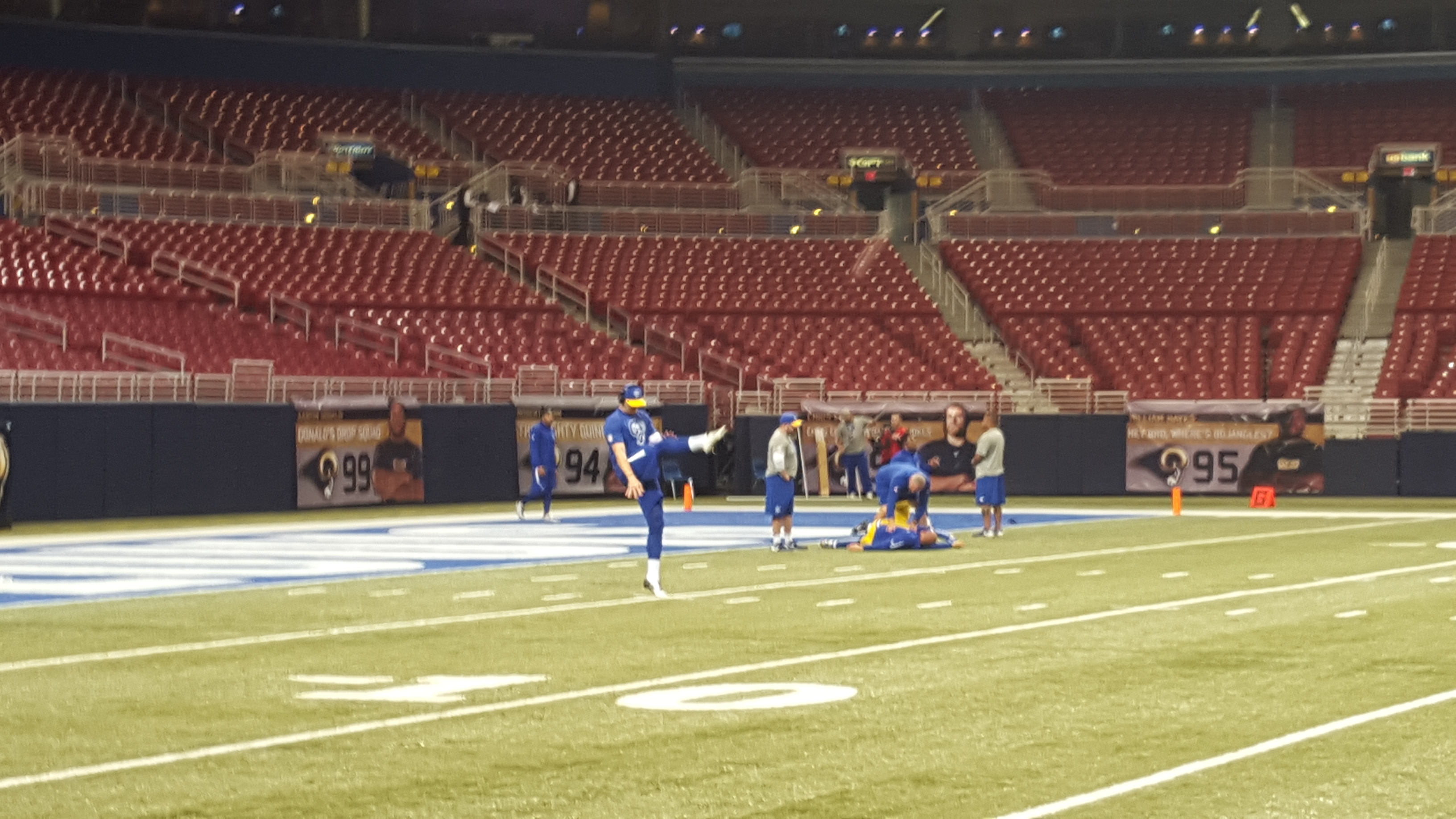 The seats were amazing, in the same corner of the end zone that Todd Gurley and Tavon Austin scored their two touchdowns. Needless to say, my voice was gone well before halftime. The dome had plenty of seats still open and there were plenty of 49ers fans - everyone knows the story.

However, the fans that did show up, were LOUD. If the stadium is packed with Rams fans, I can't imagine how loud it can get in there - and I've been to two games in Seattle. Speaking of empty seats, it was the day after Halloween, so Stan Kroenke was in the audience, sitting with all the fans. Easily the best costume I've seen this year. 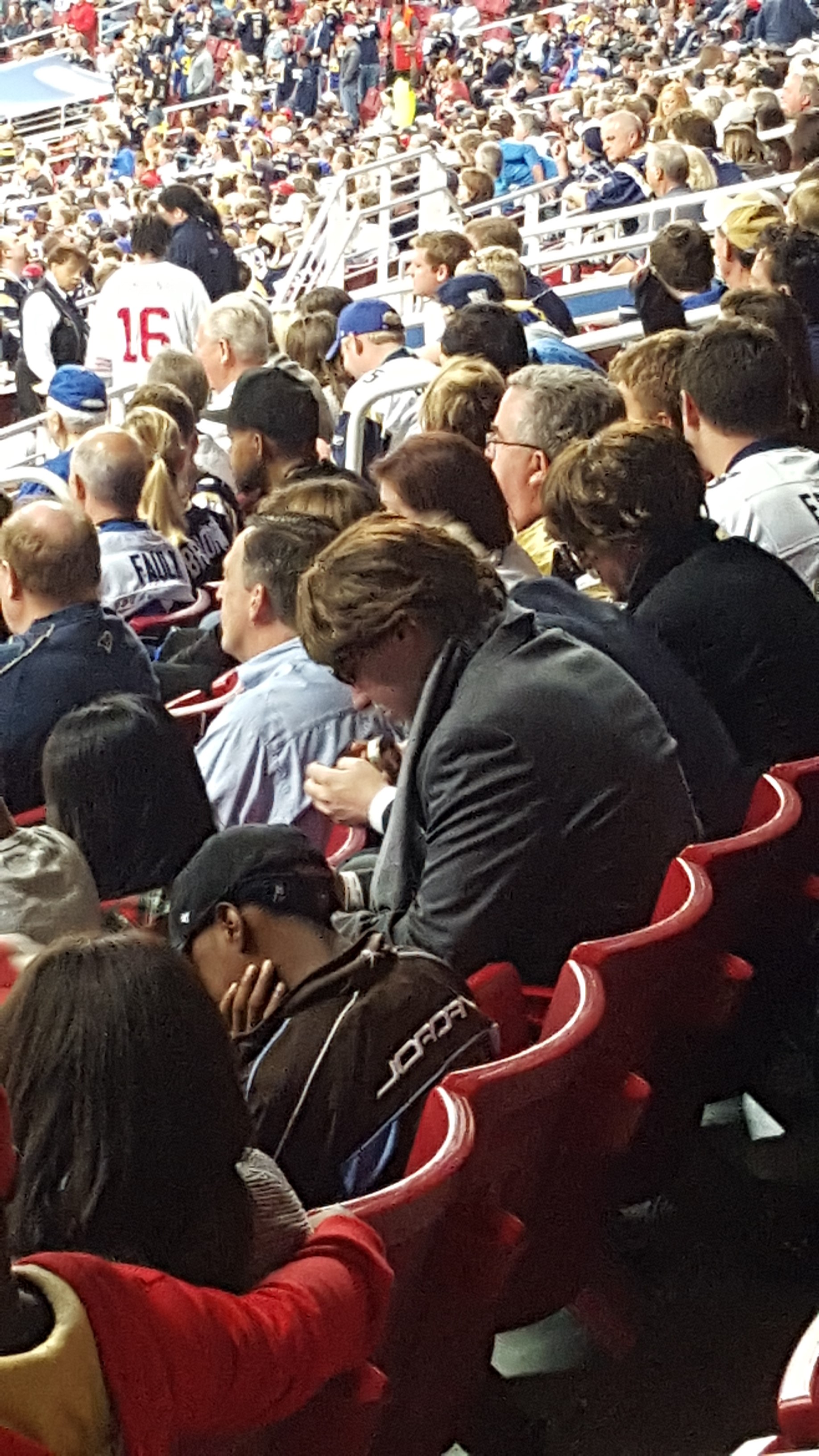 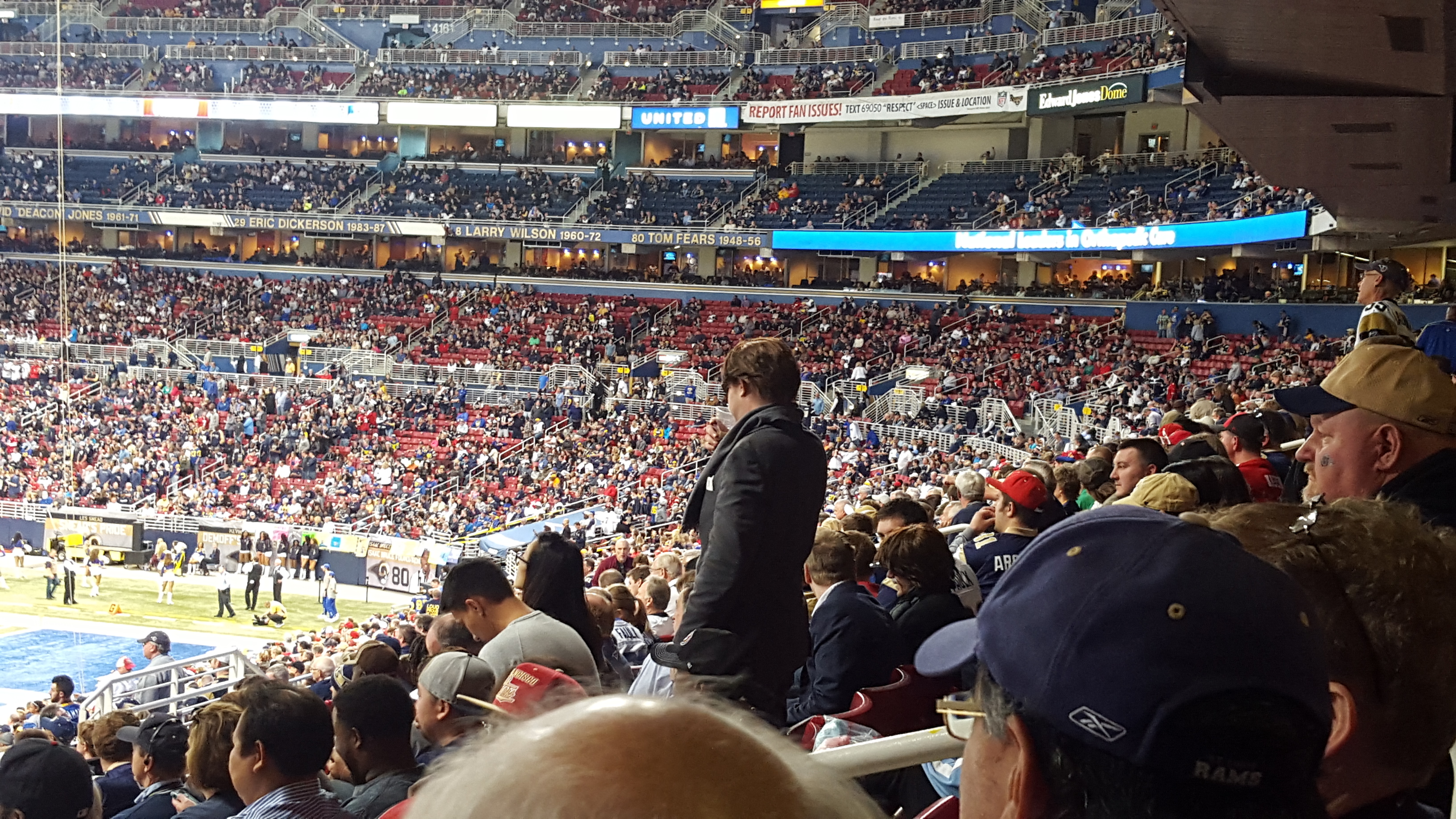 I didn’t take many pictures of the game, because: 1) you can get better ones on the Rams site, 2) when I did take a picture, the 49ers blocked a FG (see below) – so I put my phone down. 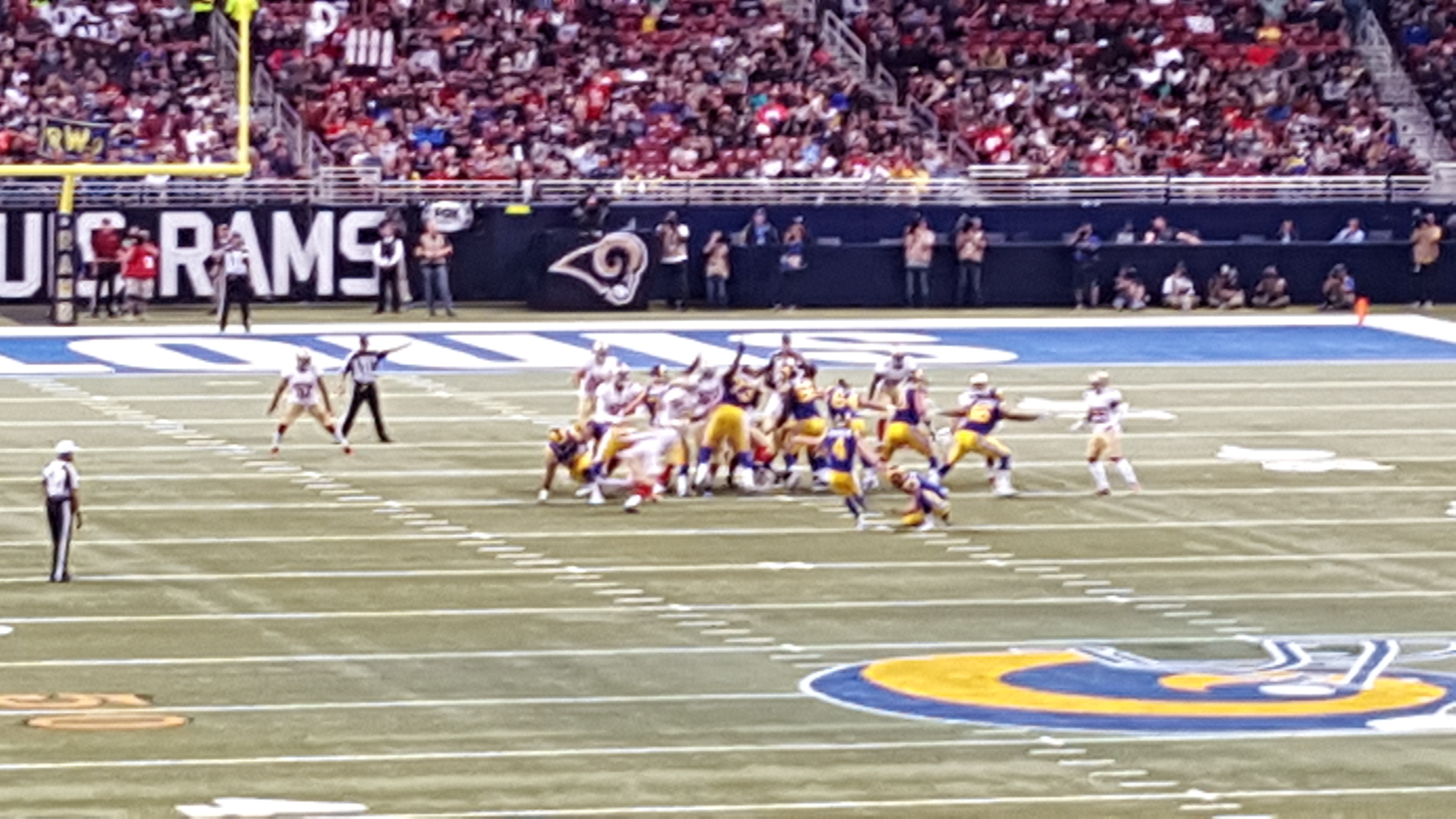 Niners fans were pretty good, the guy we were sitting with looked like Anquan Boldin (photo below). I'm pretty sure it was him, since he was inactive for the game. Even during my visit to Candlestick in 2013 they were nice, maybe I’ve had good luck, but I can't talk about their behavior around me. Can’t say the same for Seahawks fans, however, both games I’ve been to in Seattle they were rude and obnoxious; don’t think I’ll be heading back to CLink anytime soon. 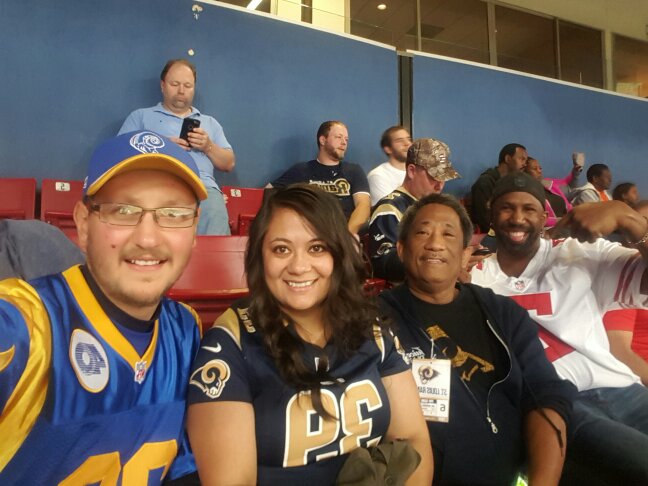 Anyway, I had a blast at the game. The Rams staff was really helpful with everything. I finally broke the curse of attending Rams losses! So here's the final photo, a little washed out background, but the Rams are lined-up in the victory formation as I'm doing my own. Let's hope we see more of that this seaso! 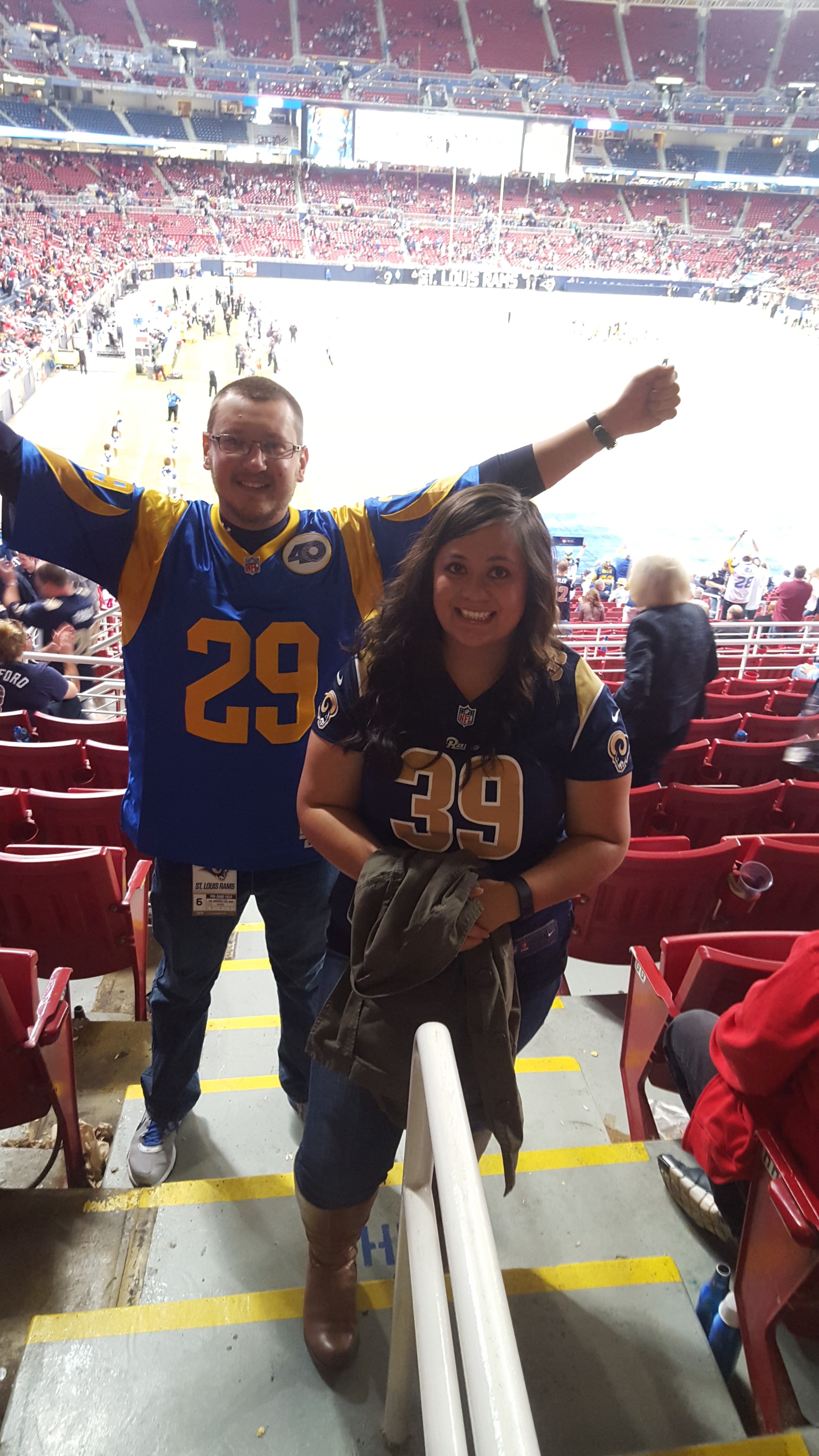