St. Louis Rams’ offensive assistant Jeff Garcia thinks the team should be able to suit him up.

With St. Louis Rams’ starting quarterback Case Keenum sidelined due to a concussion suffered in Week 11, the team went back to Nick Foles as their signal caller on Sunday.  And it went about as poorly as expected.

While stud running back Todd Gurley was only given nine carries on the day, the Rams asked Foles to throw a whopping 46 times.  He completed 30 of those passes to St. Louis Rams’ receivers.  He completed another three to Bengals’ defenders, on the way to an embarrassing 31-7 loss.
It was gruesome.  And if you were watching, you were wondering who else could step in to save the team.  Maybe it was rookie Sean Mannion, who did get snaps late in the game, completing 6 of 7 passes.
Maybe it’s another quarterback who wasn’t even suited up.  Maybe the Rams’ savior is sitting in a box overlooking the field.  Maybe it’s offensive assistant Jeff Garcia.
He seemed to think so, on Twitter, prior to un-thinking it by deleting the tweet.  [h/t @Wynnde13 for the screenshot]. 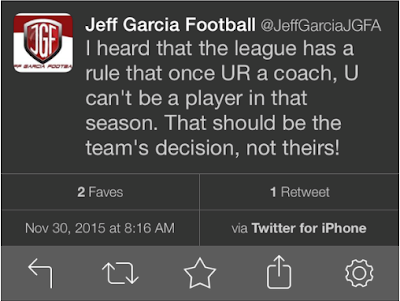 If you were struggling to stomach the on-field play of the St. Louis Rams’ offense yesterday, you weren’t the only one.  Jeff Garcia thinks he’s got what it takes to right the ship.  Maybe he’s right.
I mean, what’s the worst that could happen?