Here's who's getting the Rams-Bengals game as part of their local broadcast package. 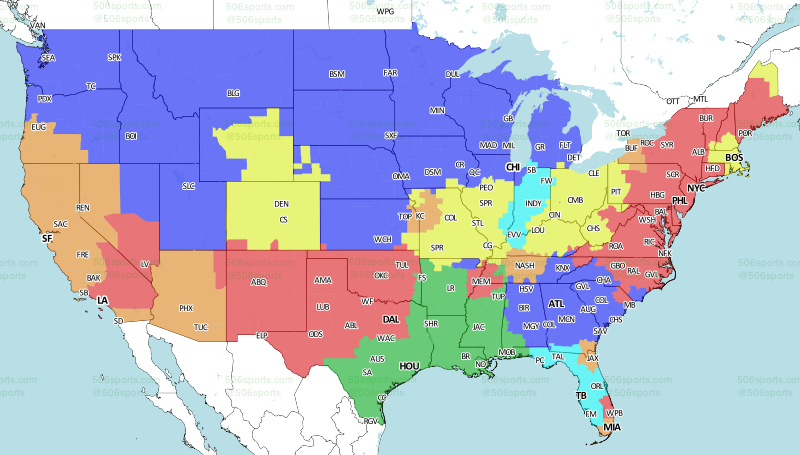 The St. Louis Rams are up in the Rust Belt to take on the Cincinnati Bengals in the early FOX broadcast group per the map above via 506Sports (full hi-res photo here).

It's an interesting map this week.

For Rams Nation, it's nearly all of Illinois and Missouri minus the KC market. Slivers of Kansas, Oklahoma, Arkansas, Tennessee and Kentucky are in there as well.

For the Bengals' localites, they get all of Ohio save for a tiny sliver carved out for the Colts. A huge swath of Kentucky and West Virginia picks it up as well with a sliver of southwestern Virginia and western Maryland.

Third party regions? With Steelers fans keeping an eye on the AFC North leading Bengals, Pittsburgh gets the game. Same goes for playoff-bound the New England Patriots and Denver Broncos markets. The former gets most of Massachusetts, all of Rhode Island and the southern cuts of Vermont and New Hampshire. The latter gets you nearly all of Colorado with a fair share of Wyoming and Nebraska as well.

And a hearty hello to the northern tip of Maine who gets today's Rams-Bengals game because...I dunno. Maybe Presque Isle is stacked with Rams fans.