As it stands, the St. Louis Rams look to be sending two representatives to the 2016 Pro Bowl, according to voting results - a consensus of players, coaches, and fans -  released by the NFL on Wednesday.

Rams’ rookie running back Todd Gurley is the second leading vote-getter for NFL running backs, with 75,592 votes.  Falcons’ running back Devonta Freeman leads the league with 103,334 votes.
On the defensive side of the ball, second year stud defensive tackle Aaron Donald also ranks second at his position, having received 48,125 votes.  Bengals’ tackle Geno Atkins leads the league with 54,816 votes.
It’s often difficult for rookies to make the leap from college to the NFL, and it’s especially tough for them to play at such a high level that they garner enough attention to earn a Pro Bowl spot.  If Gurley earns the honor in 2016, it’ll mark the second year in a row in which the Rams have sent a rookie.  Aaron Donald’s stellar rookie campaign earned him the trip last year.
You can cast your vote for 2016 Pro Bowl-ers at NFL.com/probowl/ballot.  Voting concludes on Tuesday, December 15th, and Pro Bowl players will be announced on NFL Network on Tuesday December 22.
Here’s the [current] full list of leading vote-getters by position: 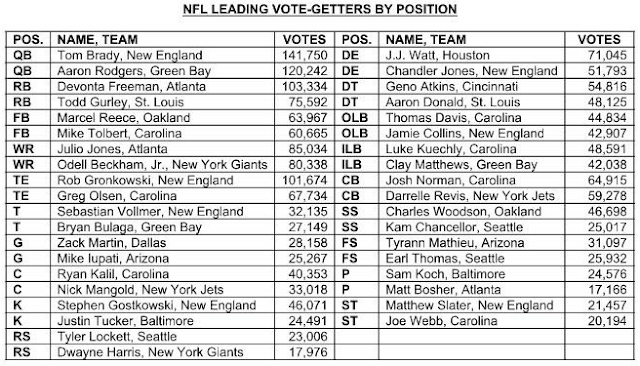