Are you getting the Rams-Browns game broadcast where you live? 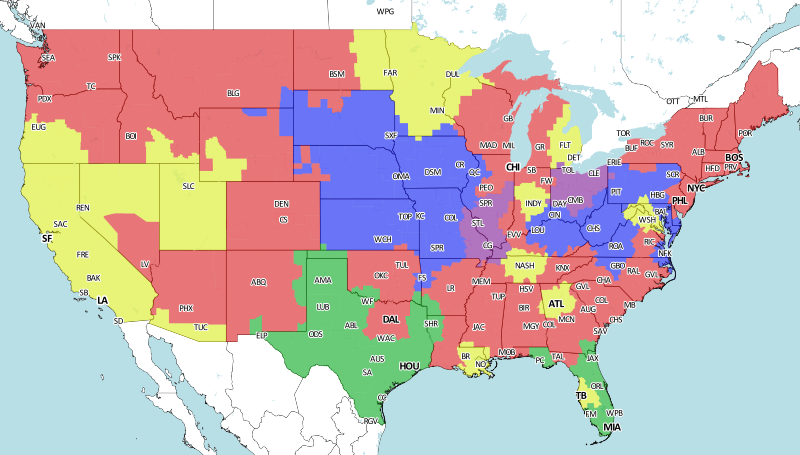 A little wrinkle this week with the Buffalo Bills and Jacksonville Jaguars kicking off at 9:30am ET in London, England. The Buffalo and DUVAAAAAAAAAL markets will get their game on CBS; the rest of the country will have free access to stream it through Yahoo! (exclamation point per proper branding, not my personal excitement over a Bills/Jags game starting before 10)

As for the slate, here are the assignments:

Red - Jets at Patriots (plus Alaska and Hawaii)

So as for right now, it's a pretty small map for us this week. Rams territory picks up southeast Missouri, southwest and central Illinois, southwest Kentucky and the tiniest sliver of northwest Tennessee around Union City.

The Browns' AO picks up nearly all of Ohio, the Youngstown suburbs in Pennsylvania, the Toledo suburbs on the Michigan side of the border, and the Cincy burbs in Indiana and Kentucky.

These are subject to change. I wouldn't be surprised if CBS tries to poach one of the NFC West markets with Seattle and San Francisco playing on Thursday and Arizona on Monday.

A couple of late changes.

The Cincy market flipped from Rams-Browns to Steelers-Chiefs with the Bengals and Steelers battling for AFC North supremacy.

Spokane fell in with the rest of the Pacific Northwest to get Jets-Patriots.

Twin Falls, Idaho, instead leaves Jets-Pats to get Raiders-Chargers.