Rams QB Spray Charts: Where were Hill & Davis throwing the most?

Let's take a look not at who the Rams QB were targeting but where they were throwing.

Share All sharing options for: Rams QB Spray Charts: Where were Hill & Davis throwing the most?

Shaun Hill collected his first start on Sunday as a St. Louis Ram before being replaced at halftime.

Despite starting off going five for five and helping Brian Quick jump-start his best performance ever as a Ram, Hill's performance likely is being remembered more for a boneheaded interception near the end of the first half. As I thought a bit about the throws to Quick and the interception, I thought it would be useful to go back and look at what parts of the field he was exploiting.

Here's his spray chart from Sunday via ProFootballFocus: 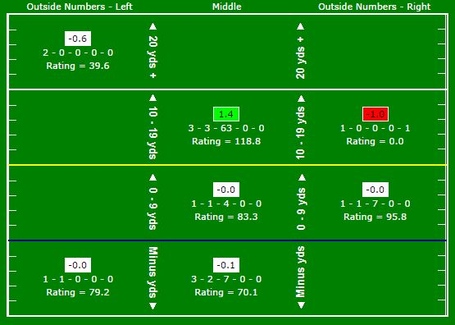 The two deep throws to the left were to Quick and Kenny Britt, both incompletions. More interestingly, both came on the same series midway through the second quarter. After two first down conversions had moved the ball from the St. Louis 35 to the Minnesota 41, Hill had to release the pass early due to pass pressure. The read was correct. Quick had Vikings CB Xavier Rhodes one on one with a bit of a window behind him. Chris Givens' offensive interference on the next play set up 2nd and 20. It was here when Hill threw the second deep ball, but he and Kenny Britt made opposite reads. Britt ran a 15-yard hitch while Hill thought he was going to run a go down the sideline.

I mention those only to point out how rare it was to go deep against the Vikings in the first half. For all the talk of how contracted the Rams' offense is under Schottenheimer, you had five intended throws beyond 10 yards in those first 30 minutes. And as you can see, Hill was successful down the middle of the field. The issue standing out was the interception; that ball has to be thrown away. Period.

Coming out for the second half however was Austin Davis. Now down 13-0, it was up to Davis to help put points on the board and try to get the Rams back in the game. Here's how his half looked: 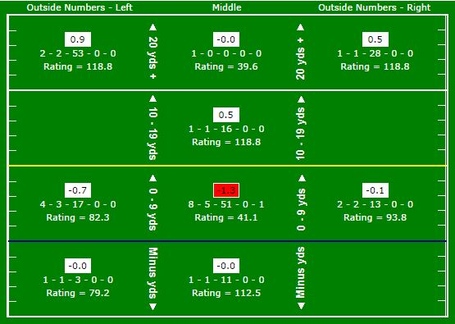 As the game went on and the Rams fell further and further behind, the desperation led them to open up the deeper passing game...while Minnesota was content to play a less aggressive defense to negate any touchdowns. Now it's worth pointing out that one of those deep left throws was on the first drive of the second half. Davis was given a nice pocket and took advantage of a good 1v1 situation with Jared Cook working the left sideline against Robert Blanton who completely misplayed Cook, picking up a pass interference call...despite still allowing Cook to make the grab. Coulda used plenty more of those...In any case, it was the stretch thereafter that was the problem.

The Cook play set up the Rams in FG position, and after the drive predictably stalled, Greg Zuerlein was able to finally get the Rams on the scoreboard. The defense forced a stop, but the Rams' next possession stalled. Zac Stacy picked up a first down on two consecutive runs. On the third, despite not knowing the playcall and what his responsibility was pre-snap, Stacy took the ball six yards to set up 2nd & 4. The Rams had a deep pass schemed up as Davis took a full seven-step dropback with a playaction wrinkle, but Jake Long and Rodger Saffold made a mess of the Vikings' rush and allowed DT Linval Joseph to sack Davis. A customary 3rd down dumpoff ended the drive. The Rams would punt, and on Minnesota's first offensive play, Cordarelle Patterson did a thing.

I guess more than anything, the coaching staff at least felt some comfort letting Davis go deep. There were play calls explicitly designed to do just that and he showed little hesitancy in going for the big play. Rams fans should also be pleased that he worked almost the entire field, working both sides of the numbers. As for Hill, his sample size was so small especially after the first series that it's tough to get much of a read on how he feels in this offense. The results from Quick were inspiring nonetheless.

The problems? Too many of the passing plays were relegated to the checkdown, which the Vikings were all too prepared for. That's how you get a QB to throw more than a third of his passes just in front of the offensive line. And as you can guess, the red box in the middle of the chart means bad no good things. You also have to put some blame on the offensive line who allowed four sacks which certainly affected the play reads from Davis. He needs to get a better feel of the timing to know when to just throw a ball away or begin escaping the pocket for an extra second, but the line needs to make sure that's happening after three seconds or more.

All in all, there's obvious room for growth. But as the charts above show, there's reason to think that Austin Davis has at least a basic framework for success...and perhaps concern that Shaun Hill was fully ensconced in the Brian Schottenheimer vortex.