Saints at Rams Preview: How to Watch, Who to Watch, Trailers, and Highlights

New Orleans and St. Louis open up their respective preseasons on Friday. Here's everything you need to know about the game.

Share All sharing options for: Saints at Rams Preview: How to Watch, Who to Watch, Trailers, and Highlights

The St. Louis Rams open up the 2013 preseason at home, hosting the New Orleans Saints on Friday night.

For the first time in nearly two and half years, as a result of a 17-month Bounty Gate suspension,  Rams’ defensive coordinator Gregg Williams is set to field his defense Friday night.  It just so happens he’ll be unleashing his unit against his former team; the New Orleans Saints.   It’s likely Williams and Saints’ head coach Sean Payton share a brief handshake, possibly a pleasantry, but probably won’t spend much time reminiscing.  After that, both will get down to business for their respective teams.

Speaking of familiarities with defensive coordinators, Rob Ryan - who was the Rams’ defensive coordinator for less than three weeks [in early January of 2014] will be looking to out-duel his predecessor this evening.  A defensive front which is lead by Cameron Jordan and Curtis Lofton is now backed proven commodities Jairus Byrd, Champ Bailey, and second year safety Kenny Vaccaro.

Williams and Ryan aren’t known for their bland, unaggressive play-calling, so things should be very interesting on defense.  It just wasn’t in the stars for Rob Ryan in St. Louis, though...and the Rams ultimately got the guy they wanted when Jeff Fisher took over in 2012.

After extensive conversations regarding defensive philosophy, the Rams and Rob Ryan agreed he was not the right fit for the DC position.

On the opposite side of the ball, the Rams will - for a very short time - be lining up against one of the most potent offenses in the NFL.  Lead by Drew Brees and TE/WR Jimmy Graham, keeping the Saints offense at bay is no easy task.  And keep an eye out for rookie WR Brandin Cooks.  But despite being a preseason game, the Rams have shown the ability to thwart some of the league’s best as a result of stellar play from their defensive front.  The Saints are no exception.

Lead by Robert Quinn, Chris Long, Michael Brockers, and Aaron Donald, the Saints offense will have to travel through "Sack City" on their way to the end zone on Friday night.  Rookie defensive tackle Aaron Donald, who’s been impressive in camp, looks to see the most time of the bunch as he looks to acclimate himself to life in the NFL.

The Rams also have a slew of young defensive backs vying for playing time, and ultimately a spot on the team.  This position battle at secondary looks to be the most exciting/intriguing to watch this preseason.  Rookies Lamarcus Joyner, Mo Alexander, E.J. Gaines, Marcus Roberson, Greg Reid, and Christian Bryant will look to impress this preseason, in hopes of beating out 2nd/3rd year DB’s like Brandon McGee, Cody Davis, Matt Daniels, and Darren Woodard.  Tonight would be a good night to start standing out.

Also, for the first time since being drafted, tomorrows headlines - regarding rookie DE Michael Sam - should be focused on his play...and hopefully nothing else.  You listening, Tony Dungy?

Offensively, the Rams will be without a few of their best.  Don’t expect to see much, if any, play from QB Sam Bradford [knee], LT Jake Long [knee], or Center Scott Wells [illness].  Jake Long’s out for tonight.  There’s been question of whether or not he’d be ready for the season opener since undergoing knee surgery last December, so sitting out tonight comes as little surprise.  Look for recently acquired free agent QB Shaun Hill, rookie Garrett Gilbert, and Austin Davis to share playing time on Friday night.  For Bradford, it’s a matter of Fisher being cautious not to rush the Rams’ signal caller [via Nick Wagoner, ESPN]:

He's done everything we needed to see right now at practice," coach Jeff Fisher said. "So he's going to play in the preseason, unlikely that he's going to play this week. But he'll get plenty of snaps with the starters because he needs to, he needs to get out there and work with Scott and the rest of the guys. But it's not because he can't, it's because it's our choice; as I have said before I'm really pleased with where he is and what he's doing. You see every day at practice he's doing something, that you just go, 'That's Sam', that's what we expect from him.

Another contested battle for depth chart supremacy to monitor is at running back.  It appears Zac Stacy has locked up the starting gig, and despite murmurs that rookie Tre Mason could vie for starting time, he’ll have to outperform Benny Cunningham if he hopes to get his share of carries when regular season rolls around.

At WR, just look for someone to stand out.  Kenny Britt’s new in town, but he’s been making the most "waves" in camp this year.  Tavon Austin will be looking for a breakout sophomore campaign, and all eyes will be focused on Brian Quick, as a he looks to break onto the scene in 2014, quieting doubters who feel his draft status, at least at this point, was unwarranted.

It’s preseason football, and regardless of how little the Rams’ and Saints’ starters take the field, football is back!  It’s an exciting time. 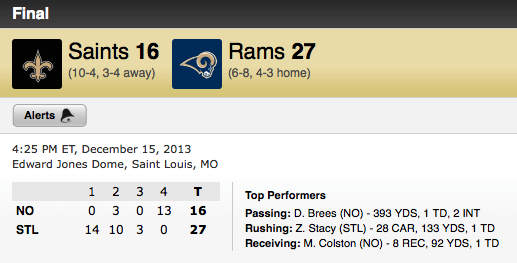