The St. Louis Rams will finish up the 2014 preseason on the road, heading to Miami to take on the Dolphins on Thursday night. Their toughest test? [Re]Establishing rapport on offense without risking further injury.

The whole world knows that ESPN looked silly yesterday when reporter Josina Anderson issued details on the shower choreography of the St. Louis Rams, a team whose roster the openly gay defensive lineman Michael Sam is trying to make.

Not a Distraction...Tony Dungy With Some Praise |  CBS Sports

Former NFL head coach Tony Dungy said over the summer that if he were still a coach, he wouldn't have drafted Michael Sam. Dungy alluded to the fact that Sam would be a distraction in the lock room.  With the preseason over three weeks old now, Dungy talked about Sam again on Wednesday and this time, he had positive things to say.

Keep Your Eye on Watts |  ESPN

Since returning to the practice field after a hamstring injury early in training camp, St. Louis Rams running back Trey Watts has embraced every facet of the game in an effort to steal a spot on the team's initial 53-man roster.

Since head coach Jeff Fisher and general manager Les Snead took over the Rams in 2012, the St. Louis duo has done an excellent job of drafting. Granted, they acquired a barrel of picks from the Redskins by trading down in the 2012 draft, but they have turned those selections into productive players.

As Greg Robinson readily admits, his first training camp and preseason with the Rams has had "its ups and downs.’’

The St. Louis Rams close out the preseason Thursday night against the Miami Dolphins. Jeff Fisher uses the fourth game of the preseason a little differently than other coaches, which means the starters could get a decent amount of playing time even after last week’s injury nightmare. Here are five players to watch in tomorrow’s game. 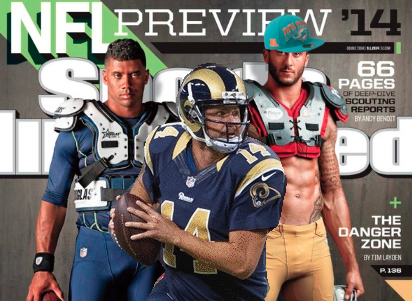 Michael Sam is about to get one last chance to show the St. Louis Rams why he belongs on their 53-man roster. For him — and everyone else on NFL roster bubbles — a preseason finale is anything but meaningless.

Only the St. Louis Rams know exactly how many players they plan to keep at each position. Therein lies the difficulty in attempting to project a 53-man roster.

The St. Louis Rams will travel to South Beach to take on the Miami Dolphins for the fourth and final preseason exhibition of the 2014 season.  A lot has changed over the past week, so there’s still plenty to see...

While many NFL teams rest most of their starters in the final preseason game rather than risk injury, St. Louis Rams coach Jeff Fisher has a major quandary in the aftermath of quarterback Sam Bradford's season-ending knee injury.

Russell Wilson won the Super Bowl, so his picture gets to be made slightly larger than the rest...therefore ruining a perfectly good left indent. 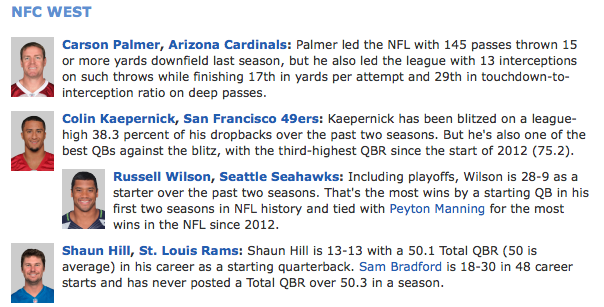 Eight Players to Watch on Thursday Night |  The Phinsider

We've reached the fourth and final preseason game of the year for the Miami Dolphins. Thursday night will be the last meaningless game the Dolphins play in 2014. This game will feature a heavy load of back-ups and bubble players trying to state their final case for a roster spot before the roster must be trimmed down to 53 by 4pm ET on Aug. 30.

Here’s a list of seven players the opposition will be closely eyeing...along with one Rams’ rookie who struggles to make headlines.

No Pity Party for the Rams |  St. Louis American

While it is easy to lay blame on the quarterback when a team does not perform well, I will remind you again that any quarterback is as good as his protection up front in his offensive line. The Rams have spent millions on draft choices and free agents over the years, and few have lived up to any expectation that would surpass average. The most recent offensive free agent signing of substance watched his man go right around him to lay the season-ending lick on Bradford.

Around the NFL’s Rookie of the Year Predictions |  NFL.com

It's preseason predictions time. The Around The NFL crew has been rolling through our division previews, and now it's time to break out some awards. They've already picked our MVP and Defensive Player of the Year candidates. Next up: Offensive and Defensive Rookie of the Year.

Rookie DT Aaron Donald has impressed in the preseason.  Has he done enough to impress the guys from NFL.com?

The fourth preseason game represents one final chance for players on the cusp of making the roster to make an impression. Here’s who you should keep an eye on in Thursday’s game.

The timing of Sam Bradford’s season-ending knee injury was especially hurtful. Not only for Bradford, who worked tenaciously to put himself in position for a strong comeback after shredding the same knee last fall.

With the news coming out of Sam Bradford’s torn ACL, the St. Louis Rams have now found themselves in desperate need for a quarterback. This is, unless, you’ve sold yourself on Shaun Hill as the starting QB.


Chris Mortensen on Whether QB Job Is Shaun Hill’s to Keep:

Ten Things to Watch For in Preseason Week 4 |  Football Nation

While the majority of the league’s starters will sit this one out, there are still plenty of position battles to monitor as NFL team’s narrow down their final rosters for the 2014 season.  That, and this list contains two Rams slides...that’s like 25%!

The injury to Sam Bradford has placed the Rams in a precarious situation. With Shaun Hill slated to start Week 1, the Rams can begin preparing for the 2015 NFL Draft. Current offensive coordinator Brian Schottenheimer has not coached a team with a 60 percent completion percentage since Brett Favre led the New York Jets in 2008. That needs to change if the Rams are going to make the playoffs. Here are the five best fits for St. Louis.