A sad weekend for all of us Rams fans. The tragic loss of QB Sam Bradford - to a season-ending ACL tear in Saturday's game against the Cleveland Browns - casts a pall over the Rams, their fans, and the upcoming season. Keep your chins up! The Rams can still reach double-digit wins - and contend for a playoff berth - this coming season. A ferocious defense, punishing running game, and a quality backup QB (Shaun Hill) ensure that the Rams will be competitive this season. Wishing Sam Bradford a healthy, speedy recovery! I almost forgot...the Rams must reduce their roster to 75 by 4.00pm EDT Tuesday.

Jeff Fisher's Sunday Press Conference, where he discusses the season-ending injury to Sam Bradford, and the teams' plans for the 2014 season:

Leave it to Chris Long to sum up my feelings to a tee:

This is a TEAM. Next man up. I believe in this locker room and what we have and can't wait to show it week 1!!!!!

And for JL55 to give a little tug to my heartstrings:

My heart hurts for my friend Sam. The way he worked, the leadership he showed and his spirit was amazing this whole offseason. Hate this.

Now THAT'S what I like to hear!! A true leader:

This is a TEAM. Next man up. I believe in this locker room and what we have and can't wait to show it week 1!!!!!

Johnny Manziel wasn't the only one to break out the money sign tonight. Michael Sam did too: http://t.co/5OfyXXDjar pic.twitter.com/UCX7QF88p2

Wishing all the best to Rams and 49ers fans in the Bay Area:

Breathed a sigh of relief after reading this report:

Trumaine Johnson, Fisher said, will miss 4 to 6 weeks with an MCL injury. (Those injuries are non-surgical.)

I wouldn't wish any QB on Brian Schottenheimer. He's a career killer.

In other #Rams news, watched highlight of Robert Quinn blow by All-Pro LT Joe Thomas for a sack on Hoyer, who had 2.36 seconds. Quinn unreal

Do The Rams Not Have Confidence In Greg Robinson?: Ramblin' Fan

Should we be making judgements about a player based on one preseason game? I believe the Rams have full confidence in Robinson.

Highlights from the Rams' 33-14 preseason win against the Cleveland Browns.

5 Players Who Stood Out In Week 3: Rant Sports NFL

With Sam Bradford Out For The Season, What's Next?: Ramblin Fan

1960 - The AFL begins placing players names on the backs of their jerseys.

Short and sweet...but a decent little summary of the Rams' strengths, weaknesses, and expectations entering the 2014 regular season.

With the first cutdown from 90 to 75 scheduled for Tuesday, its a good time to look at the Rams roster, and attempt to determine who will make the final 53-man roster. Jim Thomas shares his thoughts on who will make the roster, who's on the bubble, and who won't make the team.

For Michael Sam, a victory even if cut from St. Louis Rams roster: Washington Post

Will Michael Sam survive the roster battle for the final spot on the Rams' defensive line? If he does make the roster, it'll be based solely on merit.

Can Ethan Westbrooks beat out Michael Sam for the 9th spot on the defensive line? His play during the preseason warrants serious consideration, as noted by Coach Fisher:

"There was a series of plays in the game that was quite impressive. A couple tackles for loss, a sack, a hit on the quarterback, just one play after another. Then he moved inside to tackle and was doing some stuff, so he's really come on. He's got obviously a couple of big weeks ahead of him, but he's shown he can do some things."

Stat Facts Of The Week: Opponent Fumbles Lost Per Game

The Rams defense went from second-worst in 2012 - to second-best in 2013 - in recovering opponents fumbles. Expect those totals to be even better this season, as Rams' DC Gregg Williams turns up the heat a notch or two. 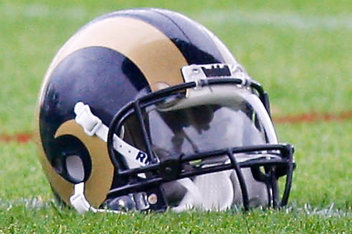 As expected, Jake Long isn't quite regular season-ready yet, and it showed in the Rams' preseason win against Cleveland. He'll have another preseason game to shake off some of the rust, and return to pre-injury form.

Jack Bechta takes an in-depth look at the myriad of rules regarding injured players in the NFL. The Rams will need to make decisions on Barrett Jones and Trumaine Johnson in the next few days.

Has the light turned on for Quick?: St. Louis Post-Dispatch

Brian Quick has had an excellent training camp and preseason. Will all that potential finally turn into results on the field?

Michael Sam continued his fine preseason play, in the Rams' win against Cleveland. Has he done enough to earn a spot on the final 53-man roster?

Eric Dickerson is still considered among the greatest players to ever don a Rams jersey. He holds the NFL single-season rushing record [2105 yards]. Inducted into the Hall of Fame in 1999, he remains one of my favorite Rams. I'll never forget watching him shred the Dallas Cowboys for 248 yards rushing on January 4, 1986. The following video is a tribute, to one of the greatest running backs in NFL history.

Saturday's game was noted for the number of injuries the Rams sustained. It was also noted for the strong performances of Michael Sam, Marcus Roberson, and Austin Davis. All three are on the roster bubble, but made strong cases for inclusion on the final 53-man roster.

Despite the presence of Benny Cunningham and Tre Mason, Zac Stacy remains the Rams featured running back, as noted by Coach Fisher:

"He's our running back."

Doug Farrar previews the rough and tumble NFC West. The Rams are his "dark horse" favorite for winning the division, the best and toughest in the NFL.

The NFL and NFLPA agreed to an expansion - from 8 to 10 - of the practice squad for the 2014-2015 seasons. Good news for the Rams, who keep stockpiling young talent.

Peter King - and his team at MMQB - unveil their Fantasy Football player rankings. The first position groups in the series: TE's, QB's, RB's, and WR's.

10 things you need to think about.

The Rams currently have $1,678,451 in available salary cap space. I will be publishing a complete salary cap update within the next couple of weeks.

I've updated the roster to include all transactions as of August 24, 2014. The Rams roster currently stands at 89 players, with 91 players under contract (Mason Brodine and Isaiah Pead are on the IR list). Rosters must be trimmed to 75 players by August 26. The final roster cuts - to reach the 53-man regular season limit - must be completed by August 30. The Rams will need to make roster decisions regarding Sam Bradford, Trumaine Johnson, and Barrett Jones. Jones underwent back surgery two weeks ago, and his status for the season has not been determined. Bradford suffered a season-ending ACL tear on Saturday, and will likely be placed on season-ending Injured Reserve. Johnson suffered an MCL sprain in Saturday's game, and will be out for 4-6 weeks.

Blast From The Past: Monday's Got The Blues: Stevie Ray Vaughan - Tin Pan Alley

Please have a great Monday and a Ramtastic week!!