St. Louis Rams: What Concerns You Most?

The Rams are now 0-2 in preseason play. While the outcomes of the games mean little, there might be a few areas of concern.

Share All sharing options for: St. Louis Rams: What Concerns You Most?

The Rams were without starting QB Sam Bradford in their Week 1 matchup against the Saints.  That gave us all a look at backups Shaun Hill, Garrett Gilbert, and Austin Davis.  To be fair, even if Bradford had been cleared to play [and he was a healthy scratch], we would’ve been watching this trio for the majority of the game regardless.

Hill and Davis both had solid outings.  Hill - the team’s second string QB - saw the least action, but had the best results.  He completed five of seven passes, had two touchdowns, and finished the game with a 151.2 passer rating.   Austin Davis, an undrafted free agent selected by the Rams in 2012 also had a nice 2014 preseason debut; 10 for 16, 134 yards, one TD, and a 109.9 rating.

Garrett Gilbert, the team’s 5th round selection from the most recent draft, had a sluggish first game as a pro.  I suppose it’s to be expected.  He appeared erratic though, and as a result his decision-making an accuracy suffered. Stat line: 6 of 11, 53 yards, 67.6 passer rating.

After settling back in to football action, progress is the minimum expectation heading into Week 2.  Sam Bradford got the nod against the Packers, and he was impressive in his first live action since Week 7 of last season.  The others...meh

In fairness, none of these guys were playing behind the Rams’ starting offensive line; with Jake Long and Rodger Saffold both out.  It was evident on the field, as the Packers were putting constant pressure on the Rams’ signal-caller[s].

But when provided time, the results weren’t always the desired ones.  Shaun Hill threw a few passes that had more hang-time than a Johnny Hekker punt; none of which were caught by the intended receiver.  Gilbert and Davis, behind an offensive line essentially comprised of paper mache, struggled to get anything going offensively as well; combining to complete six passes out twelve, totaling 72 yards.

The good news is that Bradford looked sharp, with the exception of overthrowing Kenny Britt on a long toss down the sideline in the first quarter, and that he walked off the field healthy.

Is there a genuine concern, though, of the Rams options beyond Bradford?  Are you concerned about Bradford’s ability to help the Rams succeed even if he does stay healthy?

We witnessed the same thing with the Rams last year: a slew of penalties/mental lapses in the preseason, which unfortunately carried over into regular season play.  The Rams were eventually able to make adjustments/corrections, but they have little room for error early in the season.  After the team’s Week 4 bye, they have a slate of eight consecutive games against team’s with winning records from 2013.  It’s imperative that they’re able to compete in [and win] their games before the bye.  Silly penalties and mental mistakes won’t do them any favors

To start the 2014 preseason,  the Rams have tallied double-digit penalties in both of their matchups.  In Week 1, they 14 penalties for 118 yards, and in last week’s matchup vs. the Packers they tallied 10 for 76 yards.

Part of it could be that they’re fielding 2nd and 3rd string players, and rookies who are still trying to acclimate to life with a new team in the NFL.  It could also just be shaking off some preseason jitters. But what is the excuse for the other guys?  The one’s who’ve been around the league for a few years...the ones are simply demonstrating poor decision-making or lacking the necessary focus?

As aforementioned, the Rams’ offensive line hasn’t been on display as the team’s depth chart would indicate.  Jake Long hasn’t played a down, as he continues to recover from December’s knee surgery. Right guard Rodger Saffold sat out the team’s Week 2 matchup.  Those absences have a caused a lot of moving pieces across the Rams’ offensive front.  The results have been...well, scary.

If all goes as planned, and the Rams offensive line is able to remain intact in 2014, the Long-Robinson-Wells-Saffold-Barksdale tandem should be very good.  It’s evident, though, that depth is going to be an issue, as injuries have already begun to challenge depth.

Scott Wells, the team’s center, has played only 19 games in the last two seasons.  Many figured his incumbent to be Barrett Jones.  Jones underwent back surgery about a week ago, and is sidelined for the remainder of the preseason.  Demetrius Rhaney, the team’s third [and final] 7th round selection in 2014, suffered a "severe bone bruise" in practice last week, and will out for four-to-six weeks.  That leaves only Tim Barnes at Center, if an unfortunate injury were to sideline Wells.

Jake Long has a history of injury issues, and is currently looking to return from a torn ACL/MCL.  Saffold hasn't played a full 16-game season in three years.  Rookie Greg Robinson is still learning a new position [guard], after having played left tackle at Auburn.

The starting offensive line, on paper, looks great.  But if the unfortunate were to occur, and pieces once again began to move, there’s a chance Sean Hooey sees playing time.  That’s a bad situation to be in.  And if you saw the game against the Packers, you know what I’m referring to...

The Rams have made a name for themselves, and it’s not as a result of their juggernaut offense.  "Sack City," they’ve been dubbed, have lead the NFL in collective sacks over the past two seasons.  Lead by Robert Quinn, the Rams defensive front - which includes Chris Long, Michael Brockers, Aaron Donald, and Kendall Langford - [I feel obligated to mention William Hayes] could very well be the best in the NFL.

But the sacks just haven’t been there this preseason.  It’s fair to assume their numbers would be up if the starting defense was on the field for all of the team’s defensive snaps.  The Rams are also known for the quality of depth on their defensive front though.

Despite it all, the Rams have only three sacks in two games.  Their opponents have eleven.

There’s little reason to doubt that this defense can’t/won't pressure the quarterback, but if I’d told you the first three sacks of the preseason would come from Ethan Westbrooks, Michael Sam, and Phillip Steward would you have believed me?

Against the Packers, the Packers’ offensive line provided QB Aaron Rodgers with quality protection and he left the game unscathed.  But when they field second-string QB Scott Tolzien, the Rams began to tee off.  Check out Eugene Sims giving Tolzien a quick pick me up. 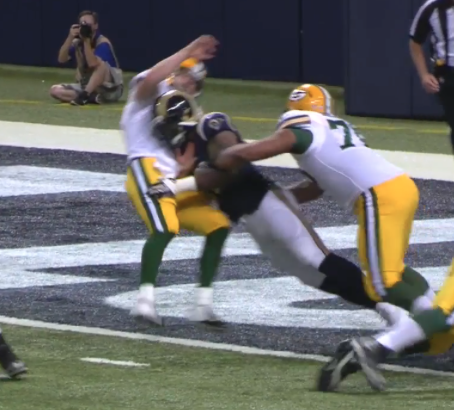 It hasn’t been pretty...and just like last year, being able to successfully take down the ball-carrier has been an issue.  It’s to be expected to start the preseason, and the Rams certainly aren’t the only team having complications in this regard.  But again, there needs to be an end to it.  Minimally, they need to show some consistency.

Exhibit A:  The Packers’ Very First Play of the Game.  Lacy goes for 13 Yards

More practice, and more game minutes logged, should help make for some sure-tackling.  It’s going to need to happen quickly though.  Eddie Lacy is no slouch.  If the kind of tackling displayed above continued throughout the course of the game Lacy would’ve easily eclipsed 100 yards on the day, and made it easy for the Packers to win the battle for time of possession.

In two weeks, the Rams’ defense will be staring at Adrian Peterson in a game that matters...a lot.  Seven days later, they’ll try to thwart Doug Martin.  One week later, Demarco Murray.

Say what you want about "rust" or "jitters," tackling needs to get better with a quickness.  Or else, you may want to readjust your fantasy running back rankings.

Friendly reminder: This season, the #Rams will face a few of the NFL’s top rushers from 2013. Have a gander... pic.twitter.com/YBKeWSsroW

*****
So what, if any, concerns do you have?  It’d be nice to say the team’s currently in "midseason form."  The reality, however, is that there a few concerns as we approach kickoff to the regular season.  Whether or not the team can make the necessary adjustments - or just remain healthy - over the next two weeks will make all the difference.