As we count down the days until kickoff of the 2014 NFL season, we’re featuring each of the St. Louis Rams’ players. Today, the oft-forgotten wide receiver...

There’s a lot to be excited about in regards to the stable of wide receivers the St. Louis Rams’ intend on fielding in 2014.  They’ve got a stellar duo of sophomore wideouts - Tavon Austin and Stedman Bailey - who look to build on solid rookie campaigns.  They’ve also got a pair of third year receivers - Brian Quick and Chris Givens - looking to improve upon disappointingly quiet 2013 seasons.  Aside from that, there’s the Rams’ newest WR Kenny Britt, who we previewed last week, and the oft forgotten, potentially under-appreciated, Austin Pettis.

The Rams, if you haven’t heard ad nauseam, are consistently one of the youngest teams in the NFL.  A lot of that has to do with turnover.  Often necessary turnover.  Regardless, there aren’t many veterans on the squad, and most of them haven’t been Rams long enough to have survived the 2-14 season of 2011.  We’ll revisit this notion momentarily.

You remember the Spagnuolo era, right?  You know, when the Rams earned the worst record in franchise history in 2009, finishing with a 1-15 mark.  That was actually followed by a pretty respectable, near playoff-bound, 7-9 bounce-back season in 2010.  Spagnuolo and Co. quickly reverted back to form though, finishing with a dreadful 2-14 record to conclude the 2011 season.  That season just so happened to be Pettis’ rookie year [and Spags’ last].  Pettis also happens to be the one of the few remaining players from an era of Rams’ history most would like to forget.

Entering his fourth year as a pro, Pettis is one of the few remaining Rams’ veterans drafted prior to the Jeff Fisher/Les Snead era:


And while being retained by a team who hasn’t had a .500 season since 2006 doesn’t sound all that impressive, sticking with the Rams hasn’t come easy for most.  There were 37 players drafted between Chris Long [2009] and the conclusion of the 2011 draft, and only eight - with the last remaining being Pettis - are still around to reminisce about the good ‘ol da...rk days.

Regardless of his tenure with the team, Pettis’ veteran presence doesn’t make him a lock for playing time...or a roster spot.  There are, however, assets he brings to the table that should earn him notice.

But before we begin, have a look at a few highlights that garnered Steve Spagnuolo and Pat Shurmur's attention during his college career at Boise State.  "The Man with the Hands" became the 78th overall pick in 2011’s NFL Draft:

It’s no easy task guaging where, and how, Pettis will fit into the Rams’ offense.  He doesn’t provide the QB with a huge target, and his 4.61 forty yard combine result proved slower than that of all the other Rams’ receivers...and Jared Cook.  Couple that with the fact that Brian Schottenheimer’s offense is derived from a pizza menu, and finding the fit for Pettis looks even murkier.

He’s certainly not the "number one" or "elite" wide receiver the Rams have sought since the Greatest Show on Turf days, but he’s proven serviceable.  He’s dependable when called upon.

His main competition will be Brian Quick and Stedman Bailey; for differing reasons.  We’ll start with Brian Quick...

Quick was the first of four receivers selected under the Fisher/Snead era, but you’ve got to wonder if the 2014 free agent addition, Kenny Britt, was a result of the disappointing start to Quick’s career; a contingency plan of sorts.  As noted in the Britt piece from last week, despite being drafted three years sooner, Britt and Quick - currently - are both 25 years old.  And I’m not suggesting they’ve given up on the third year receiver from Appalachian State, but for having been the 33rd overall pick in 2012, the productivity has yet to match the draft pick.

And while statistics aren’t everything, they’re noteworthy, so let’s have a gander.  The tables below highlight the past two seasons for Quick and Pettis.

Aside from the "Avg," which looks to be skewed by the long plays [of Quick] from the past two seasons, it’s evident Pettis has been more heavily involved in the Rams’ offense.  As a matter of fact, Pettis tallied more catches in 2012 than Brian Quick has in his first two years as a pro.  And Pettis has his number called more often than Quick, as well.  Pettis was targeted 63 times in 2013.  Quick was only targeted on 36 occasions...nine more times than in his rookie year.

But, in my opinion, Pettis is battling Quick for playing time because the Rams need Brian Quick to show up in 2013.  If it were an issue of reliability and production, Pettis would easily pass Quick on the team’s depth chart.  Fisher and Snead will probably give Quick one more chance to live up to his draft status...or else they may have to face the harsh reality that they made the wrong pick at 33.

Pettis’ real competition is Stedman Bailey.  As aforementioned, Pettis doesn’t differentiate himself as a result of sheer size or pure speed.  He gets the nod when the Rams need a reliable set of hands on the field in crunch time. 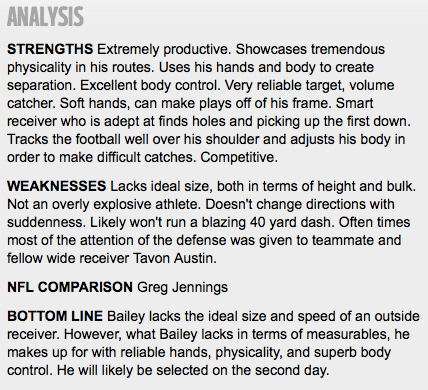 ...and there it is.  The Rams may have drafted themselves another Greg Jennings in 2013.  Bailey and Pettis share a lot of similarities in their game and, despite the impending four-game suspension for Bailey at the start of the 2014 season, a strong finish last year will have fans and coaches clamoring for his immediate impact in the team’s Week 6 matchup...when the 49ers visit the Edward Jones Dome.

And therein lies the problem for Pettis.  He’s extremely solid...as a WR3.  At this point, though, the Rams have too many WR’s they’re relying on not to "bust."

Depends.  Pettis is going to have Weeks 1-5 [with a bye week in Week 4], while Bailey is sidelined, to stake his claim on the depth chart.  Those games will almost serve as an audition for the remainder of Pettis’ 2014 campaign, and potentially his tenure with the team.  Call it the "Pettis vs. Quick Showdown."

The Rams appear to have committed to the run-game in 2014, and therefore looks from Sam Bradford may be few and far between.  Aside from the Stacy/Mason/Cunningham show, I’ll buy Britt as the team’s WR1 heading into Week 1, and getting Tavon Austin involved is imperative.  If Pettis is getting fed during the team’s first four games, the outlook for his 2014 season is bright, even when Bailey returns.  Reliable receivers aren’t forgotten by the team’s signal caller.

If it’s Quick getting looks, especially in the red zone, you may see less and less of Pettis.  You may see none of him in 2015.  But don’t simply write him off for 2014 because he’s a product of "the old regime" or he wasn’t [essentially] a first round pick.  Many have faith in the "breakout season" for Quick in 2014.  Whether unfounded or not, the Rams need to field the best corps of wideouts on offensive downs.  Favoritism...optimism...if it doesn’t translate to caught footballs, first downs, or touchdowns does it really matter?

Reliable hands matter in the NFL.  According to Sportingcharts.com, Quick [5.9%] narrowly outperformed Pettis [6.4%] in drop rate last season.  The definition of drop rate, per their site:

This statistic counts the number of times an intended receiver touches the ball but fails to catch it. If the ball is thrown but the receiver never gets his hands on it, it is not recorded as a drop.

But, if we’re looking at the last two seasons, it’s Pettis who outshines Quick.  Pettis dropped five catchable balls out of 111 targets [4.5%], while Quick dropped four of his 61 intended passes [6.5%].  Bailey dropped none. Zero percent.
If you’re asking me to pinpoint the expectations for Pettis in 2014, I’d say they probably look similar to those of 2013.  I’d imagine he catches 35-45 balls, and totals 350-500 yards.  I’ll throw in an extra TD [for a total of 5 on the year] because of the additional playing time in the first quarter of the season.
Note:  Pettis, who’s played professional football with Bradford longer than any other wideout currently on the roster, had 41 of his 63 targets prior to Bradford’s Week 7 injury vs. the Panthers.  That’s a lot.  At that pace, he would’ve challenged Jared Cook and Chris Givens for most targets [both had 83] by any receiver in 2013.

Without question.  That is, unless the unforeseen occurs.  If he stays healthy, he’s a lock.  He’s developed an excellent rapport with Sam Bradford over the past three seasons, and the size, speed, and youth of recently drafted/acquired WR’s doesn’t instantly vanquish that bond.  A 25-year old veteran may not possess the on-field prowess of the legendary Rams’ receivers from the GSOT days, but Pettis has proven his worth in this offense.

He may not be flashiest of receivers.  But for a team that’s been trying to achieve their first .500 record since 2006, shouldn’t one player’s dependability trump the unbridled enthusiasm of another?