The Washington NFL team will change its name; That shouldn't upset you

One of the more contentious issues the NFL is dealing with right now is the name of the Washington NFL team. It's going to change. That's a good thing.

Share All sharing options for: The Washington NFL team will change its name; That shouldn't upset you

Seeing as we had two pieces (this from Doug and this from Charles Martel) recently address the current controversy surrounding the Washington Redskins name, I thought it might be a good opportunity to lay down some background information and get real about what's going to happen.

So to begin, let me be blunt.

Washington should and will change their name.

Ah. That's better. Everyone feel ok now? No? I see. Then let's go through the particulars and see if we can't get this to some kind of resolution. We can do this.

The term "redskin" is not new

Linguistics is a discipline. Few, if any of us, have any actual expertise in the field. Someone who does, though, is Ives Goddard, the curator and senior linguist in the Department of Anthropology in the Smithsonian's National Museum of Natural History. Goddard's landmark work on the word itself is still the leading text on the history and development of the term "redskin," though it isn't without its detractors.

Still, it details the origins of the term from certain tribes or even more specifically, certain members of certain tribes who stumbled onto the terminology the way people have always stumbled into words to describe things. It details the landmark meeting between James Madison and an Indian delegation that provided the first recorded public use of the word.

I would recommend you read it. It's interesting, and if nothing else, you will have educated yourself on a term that you'll no doubt come across again (note: it is better to educate yourself on stuff, in my opinion). I'll leave that up to you, but the final passage from the paper is worth noting here (emphasis mine):

Cooper’s use of redskin as a Native American in-group term was entirely authentic, reflecting both the accurate perception of the Indian self-image and the evolving respect among whites for the Indians’ distinct cultural perspective, whatever its prospects. The descent of this word into obloquy is a phenomenon of more recent times.

I note that only to show the author of such a profound work on the term acknowledges that the word itself evolved and changed over time the way so many words do, this one into obloquy.

Wait, what the hell is obloquy?

In other words, the term "redskin" was originally used without any derogatory connotation or inherent racism. That changed.

When did it change to represent something racist?

Words don't work like that. Racial epithets don't get "born on" dates. The word "nigger" was used without a pejorative attachment to it for hundreds of years. That changed, obviously, at some point.

In the recent decision by the U.S. Patent and Trademark Office (which we'll get to in a sec), the plaintiffs "presented a wide variety of evidence – including dictionary definitions and other reference works, newspaper clippings, movie clips, scholarly articles, expert linguist testimony, and evidence of the historic opposition by Native American groups – to demonstrate that the word ‘redskin’ is an ethnic slur." If you're looking for the finer points in the etymology of the word itself, I would direct you to this recent piece from the linguist who testified in the PTO case. He, too, is blunt.

And since I cited M-W's definition above, I'll put this here since it, like every other major dictionary, makes note of the fouler sense of the word: 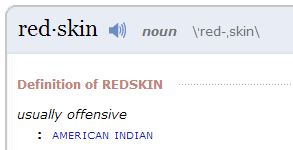 But the name is different than the word or

But they mean it to honor Native Americans or

If you think that it's worse to, potentially, not make as much money because you have to re-brand a major organization with tons of retail merchandise and marketing than to avoid justifying racism, I'd disagree with you.

If you think you can distinguish the team name from previous racist usages, I'd disagree with you.

Will we change other team names? I don't know. Maybe. But If you think that's a reason not to do the right thing if you have the opportunity to now, I'd disagree with you.

And if you think it's ok to justify racism because the Redskins made four Super Bowls in 10 years starting in '83 and you really love your Mark Rypien jersey, I'd disagree with you.

It's not that people have the wrong intentions at heart. But using those intentions to justify a mark of racism? The arc of history bends away from that, and for good reason.

Just get the government out of it

I'm still trying to find someone who thinks Congress is doing a good job, and I live in D.C. We all hate politicians, and we should. So when the unctuous hand of partisan politics touches football, we should all at least pause.

The PTO case was a different effort entirely.

Back in 1992, the initial case was brought before the U.S. Patent and Trademark Office to cancel the trademarks that protect the NFL's and the Redskins' monetization of the name and logo. The case was dismissed as it was filed 25 years after the trademark was filed for.

Then in 2012, a new case was brought forward. As you likely heard a month ago, the new plaintiffs won successfully arguing the trademark "may disparage persons or bring them into contempt or disrepute." The team is appealing, obviously, and this won't get resolved for a long time. But there's no denying it has an impact on how we should perceive the basics behind the controversy. Recommended reading? This.

Don't they have bigger and better things to do?

Sorry, I don't know what's on the docket of the PTO. And that's about the most boring aspect of this, so no, I won't look at...fine. I'll look once. The case before the Redskins case was about....Peace, Love and Juice. A juice bar... So considering this is the second case in 20 years they've heard on the Redskins and as much as the first dragged on, maybe they don't.

Stop trampling on the First Amendment!

1.) Well, some do. Somebody filed those cases with the PTO. Somebody made that ad that aired during the NBA finals. These are people. So are these. This guy too, eloquent as he was. Perhaps, the fact that Native Americans don't really have a voice in general media cycles mean there's not an outpouring of outlets and media covering the Native Americans who are offended by the name. Maybe if you only see one story or none that's more about the selectivity of the media outlets you choose to get your news from. All I'm saying is here is a study that claimed 2/3 of American Indians found the term racist so maybe we haven't quite figured out who's actually offended and who's not since it's not like the media gives them the mic all that often. Moreover...

2.) Offense is secondary to righteousness. Take a look at this list. Most of those won't inspire any offense in you because you've never heard of them. That doesn't make them less derogatory. Offense is a reaction. Immorality is inherent. We err when we focus more on who is and isn't offended and if Native Americans are offended or not and what percentage and is that percentage representative of a sufficient number to justify blah blah asleep. The bottom line's more important than arguing who's already crossed it.

This is just the media trying to seem sensitive

Well, you don't read articles or watch news packages from non-media...that's kind of a dumb way of thinking about things. That's like saying the news media are pushing this whole Iraq thing and that whole VA thing and the whole news thing. It's a thing. The media covers things. Calm down.

I'm just tired of this PC culture. Keep politics out of my sports. Who cares?

And about the whole "PC" issue...it's hard to understand why this is such a bad thing. It's a bad thing that we're growing culturally to be more sensitive to issues of race, gender, sexuality and damn near every other form of bigoted expression? That somehow makes us soft? I fail to see how strength is a direct output of bigotry, but I'm all ears.

Well what would you change it to, smart guy?

Don't know. Don't care. Something not racist would be nice. If that's the hangup here, we're doing just fine.

Get your lazy ass back up to the top and read this, you uneducated fool. You need to be able to read. If you don't have time now, fine. When you find you do, come back and read. All these other people took the time to read before jumping into the comments and you're just gonna speed your ass down the left lane to get to Commentland first? Back of the line, lazybones.