You’re trying not be distracted...yet you are. These links aren’t a distraction...yet they’re distracting you. If you’re confused, or distracted, it’s because this St. Louis Rams news is reading like Spanish. Distractions.

Believe it or not, the Rams are embarking on their 20th training camp since the move to St. Louis.

There is plenty to choose from over the first 19 camps, but what follows are 10 memorable moments, some of which the Rams would undoubtedly like to forget.

Teams With the Most Under-25 Talent | ESPN Insider
It's great to have young players, but having lot of youth is usually the result of a lack of developed veterans. We wanted to create a ranking that balanced opportunity with performance and potential, so we used the following criteria:

• The number of games in 2013 started by players under the age of 25
• The number of snaps played in 2013 by players under the age of 25
• Whether a team's young starters last season were simply injury replacements
• The number of under 25 first-team All-Pros and Pro Bowl players a team has on its roster (All-Pros were given more weight than Pro Bowls)
• Positional value (young quarterbacks and positions impacting the passing game carry more weight; backup running backs and kickers are devalued)
• The amount of value a team added in the 2014 draft, with a focus on the first two rounds (premium picks)
• The expected number of key starters and reserves under the age of 25 in 2014
• A team's recent track record of developing and retaining young talent 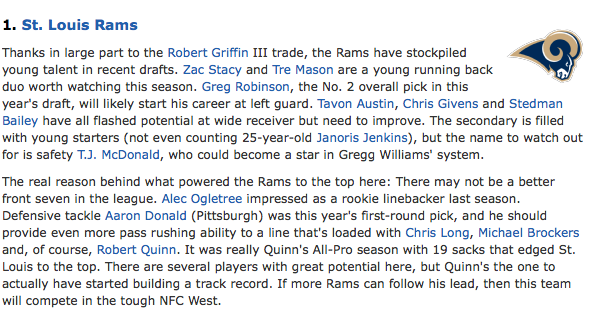 In advance of single-game tickets going on sale this Friday, July 25 at 10 a.m., the St. Louis Rams have announced its 2014 promotional schedule for home games at the Edward Jones Dome highlighted by a Greatest Show on Turf celebration and the Robert Quinn "Bernie" bobble.
Preseason’s List of Top NFL Edge Rushers | NFL.com
These rankings include outside linebackers in 3-4 defenses and defensive ends in 4-3 schemes. J.J. Watt, who moves around the defensive line and does a good portion of his damage on the interior, will be on a future list with the rest of the 3-4 ends. Without further ado, let's rank the best edge rushers.

Rookies got a head start with workouts at Rams Park on Tuesday and Wednesday, with Friday kicking off the first full-squad practice. Here is what the Rams hope to accomplish in the next 46 days leading up to the season opener against the Minnesota Vikings at the Edward Jones Dome on Sept. 7...

With 32 teams in the NFL, you really don’t want to be a part of the fan base that leaves your signal-caller off the league’s Top 25 list, do you?  It was a close call, but Bradford just slid into this super important, never-to-be-questioned, QB ranking.
Top 25 "Breakout" Prospects for the 2014 Season | ESPN [Insider]
There are 32 NFL teams.  You’ve got to figure each - after free agency and the draft - should have at least one.  Two though?  That might be difficult to come by.  Not if you’re the St. Louis Rams, it isn’t! And, in case you don’t have Insider...you’re welcome! 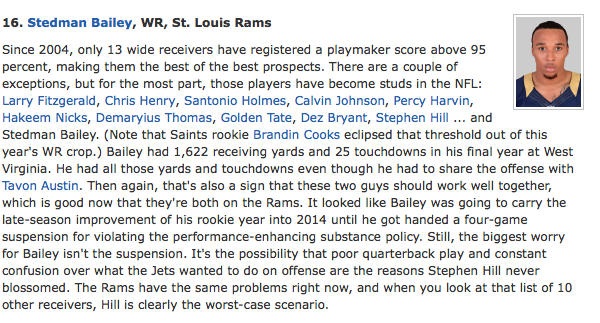 Rams’ Development at Defensive Back is Crucial | St. Louis Post Dispatch
Let's face it, the Rams secondary remains a primary concern this season.

The team did not use free agency to address this problem. As Post-Dispatch reporter Jim Thomas likes to point out, the current Rams defensive backs have just 71 NFL starts between them.

Rams Tweak Roster Before Camp | ESPN NFL Nation
The St. Louis Rams don't officially begin training camp until Friday, but they took care of a little housekeeping before the veterans join the rookies and they get down to business.

As the Rams get back to work this week, the national media is actually paying attention — and not just because former Mizzou defensive end Michael Sam is trying to make the team.
Breaking Down the Rams Offense in Fantasy Football | Rant Sports
The St.Louis Rams finished with a record of 7-9 in 2013, but flew under the radar a bit, giving teams fits seemingly all season long. Their defensive unit is one of the top-10 in football, especially the defensive front. But what about the offense? One of the youngest in the NFL, there are plenty of question marks with this unit.
Rams’ Gilbert Arrives With Plenty to Prove | ESPN NFL Nation
Under normal circumstances, Garrett Gilbert's offseason methods for learning the St. Louis Rams' offense would have put him in hot water with parents Gale and Kim Gilbert.