The Rams made a big bet on their incumbent wide receivers this year. Can the 33rd pick in the 2012 draft finally live up to the billing?

Share All sharing options for: Can Brian Quick breakout in year three?

"I’ll tell you what, probably the most improved player I've seen is Brian Quick. He's doing a great job."

That was St. Louis Rams offensive coordinator Brian Schottenheimer talking up the team's third-year wide receiver after an OTA session this spring. If it sounds familiar, it probably is. The Rams have been talking up Brian Quick since the day they made him the 33rd overall pick in the 2012 NFL Draft, ahead of Alshon Jeffery. At that point, they were comparing him to T.O. (the on-field version of Owens not the sadly comical guy who just can't quit hanging onto the past).

Every club is entitled to talk up their own guys. That's their job. But as Quick heads into year three of his career, the Rams are still banking big on him breaking out, having avoided drafting any wide receiver help whatsoever in this year's draft, including Clemson's Sammy Watkins who is looking otherworldly for the Bills in early returns.

So, can Brian Quick break out in year three?

The best place to start is to look at comparable players with comparable results. Through two seasons, Quick has played in 31 games, made 29 catches for 458 yards and scored four touchdowns. Using those numbers as a baseline, I went to Pro Football Reference to run a list of comparable players, receivers with 31 or more games played, less than or equal to 29 catches and less than or equal to 458 yards through their first two seasons, since the 1970 merger with the AFL.

Here's what I found. 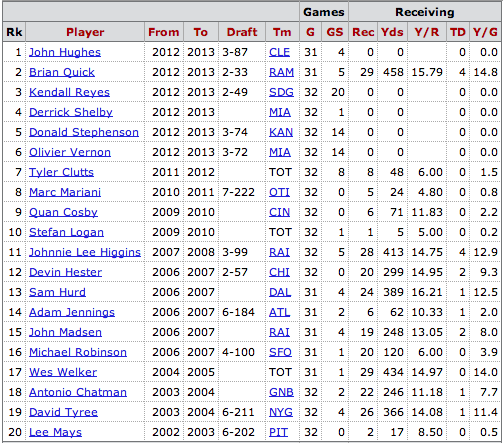 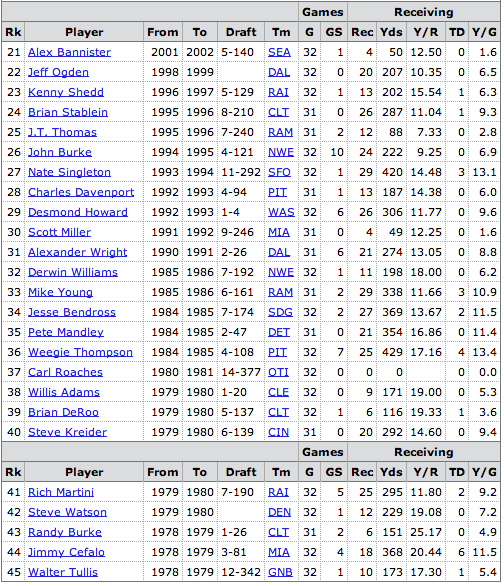 That's not a very illustrious list of names. Wes Welker stands out, but he's also a different type of player than Quick and one who happened to land in New England with Tom Brady in his fourth season. Devin Hester's on there, but he's made his money returning kicks, not lining up as a receiver.

The only other name on that list who went to achieve something notable after two fairly unproductive seasons in the NFL is Denver Bronco Steve Watson. He broke out for 1,244 yards and 13 touchdowns in his third season, and continued to produce after Denver landed John Elway in 1983.

Quick found himself sliding down the depth chart when camp broke last year, and if Kenny Britt can find his footing again, Quick may be even further down the roster than last year. In short, the odds aren't good for a Brian Quick breakout, not impossible, but not good.